The key and selected space-related research topics by the faculty are listed as follows. Do contact us to find out more.

Pico-satellite or "picosat" refers to an artificial satellite with a mass between 100g and 1.3 kg. It also has a small dimension, e.g. 10cmx10cmx10cm. It is also known as 1U CubeSat. Nano-satellite is defined as satellite that has a mass of less than 20kg. It can be designed based on CubeSat standard and has 2U or 3U (10cmx10cmx30cm) dimension.

Pico-satellite and nano-satellite are attractive due to their relatively lower cost to manufacture, test and launch, as compared with its larger counterparts such as the micro- or mini-satellites.

As a vehicle to encourage multi-disciplinary teamwork and opportunities to engage in real-world engineering projects among the engineering undergraduates and professors, an initiative to develop our own pico-satellite and nano-satellite projects was introduced in year 2009 with a group of FYP students to kick start the projects. This program is called the Undergraduate Satellite Program (USP). The USP provides an opportunity for students to participate in a multidisciplinary hands-on space project, and strengthens their skills to support future Singapore’s space industry.

VELOX-P and VELOX-PII were the first two pico-satellite missions of NTU’s Undergraduate Satellite Program. Their flight models were completed in 2012. VELOX-PII was successfully launched and operated in the orbit on 21 Nov 2013. It was the First Singapore student-built satellite to operate in Low Earth’s Orbit (LEO). 50 students in their 2nd to 4th year participated in the project each year, with the support from research students and staff. Students from EEE, MAE and SCE are involved to participate in the conceptualisation, design and prototyping of various subsystems and test systems of satellites. Besides educational objectives, VELOX pico-satellites also contribute to the satellite research with its technology demonstration and scientific payloads, for examples, in-house built sun sensors, fault tolerant power management systems, and MEMS based attitude determination system etc. The engineering model was built from April 2010. For mission control, a ground station has been set up by NTU undergraduate students in May 2010, operating in the VHF/UHF bands.

SaRC has also organized various projects related to space for year 2 and year 3 students in the form of URECA, industrial attachment and Design Innovation Programs (DIP) in each year. 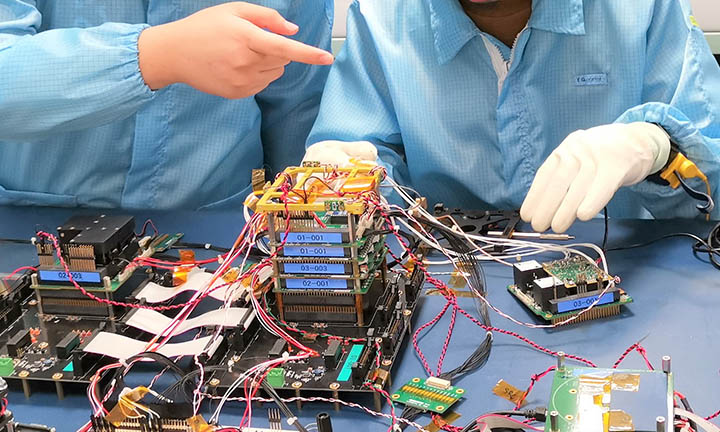