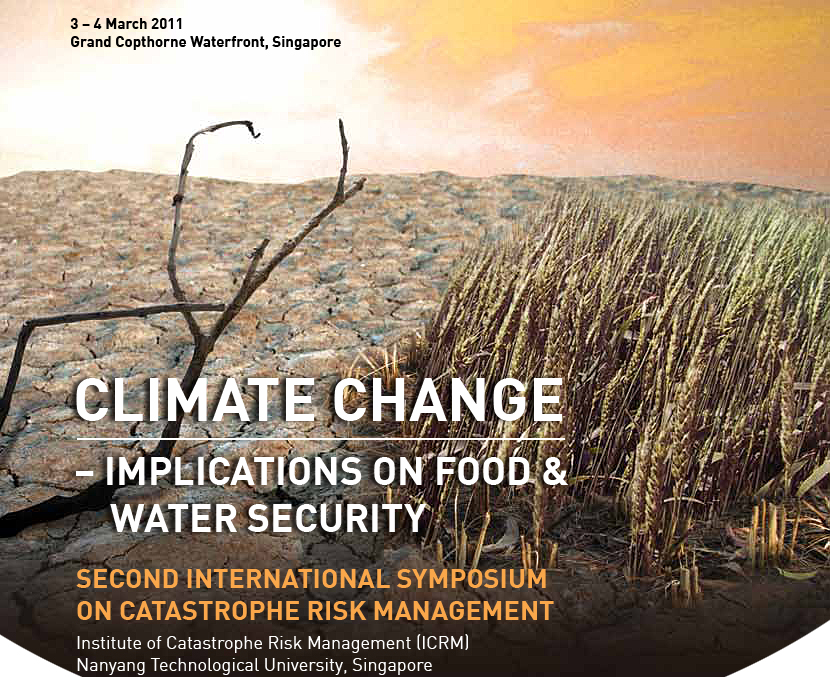 The Institute of Catastrophe Risk Management or ICRM was launched by Nanyang Technological University in January 2010 with a vision to become Asia’s leading research institute in catastrophe risk management. In conjunction with the launch, an Inaugural International Symposium on Catastrophe Risk Management was organized with the core theme of Public-Private Partnerships in managing catastrophe risk. This second symposium continues with the same key theme of public-private partnerships, but with focus on managing potential risks of climate change on food and water security.

The symposium theme is timely, as nations all over are increasingly being challenged by food and water security concerns, and how such risks could be exacerbated by potential impacts of climate change such as prolonged and severe droughts and floods. In an increasingly globalized and inter-dependent world, food and water security risks are often trans-boundary and trans-national. Severe weathers which disrupt food production in one region could affect food supply security in other regions. Similarly, weather fluctuations and water infrastructure operations in one nation could impact water resources in downstream nations, as in the case of Mekong river basin. Separately, geohazards such as volcanic eruptions could also exert enormous economic and social strains on downwind nations, as happened during the Iceland volcanic eruption, and this will also be discussed.

This Second Symposium will have five sub-themes:

It is the aim of the Symposium to raise awareness and understanding of food and water security risks against the backdrop of potential climate change impacts, which will then lead to the development of novel and innovative public private partnerships in mitigating and managing such risks.

The Symposium will bring together an assembly of the world’s leading scientists, engineers, researchers, and representatives from the finance, insurance, public and private sectors to share their knowledge on the potential impacts of climate change on food and water security, and discuss innovative and novel mitigation and adaptation strategies for managing such risks.