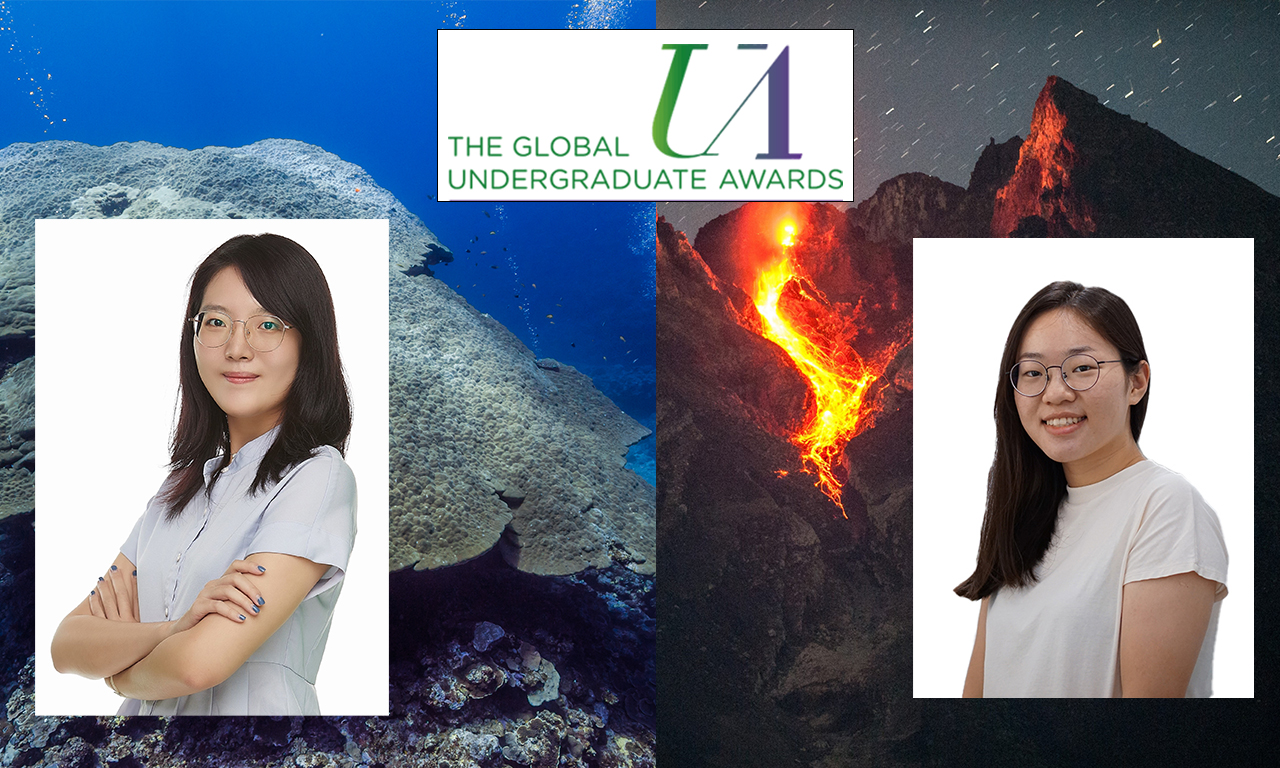 Our warmest congratulations to ASE students Zhang Yilin and Sun Huiwen, winners of the prestigious Global Undergraduate Awards (GUA)! GUA is the world’s largest academic awards programme with over 100 affiliated institutions of higher education worldwide. The winners are selected among over 2,500 through rigorous judging process.

SUN Huiwen is currently a Y4 geoscience specialisation student. Her winning research project, “Determining changes in the plumbing system of Mount Marapi through time using image analysis of lava samples” was a CNYang semester-long research module (CY1400) with the Physical Volcanology and Petrology group when she was in Y1S2. Her supervisor was Asst Prof Caroline Bouvet de Maisonneuve, and she was mentored by Dini Nurfiani.

We have caught up with Yilin and Huiwen to find out more about their winning research projects, first is Yilin (scroll down for Huiwen's interview):

Congratulations to an outstanding achievement, you are the Global Winner in the Earth and Environmental Science Category of Global Undergraduate Awards! How does that feel?

Thank you so much! I felt surprised and also very excited when I heard that I was selected as the GUA global winner. A few days before the announcement of global winners, I first received the news that my work was awarded as GUA highly commended entrants. I was very happy then and thought there was still a chance to become the regional or global winner, but I didn’t think it would really happen! This award means a lot to me; having my past work recognised would be a huge encouragement for me to pursue further endeavours in my academic career.

What do you think were the strengths of your work that made it go so far?

I think the interdisciplinary nature of this project makes it unique and scientifically important. Also, my work is relevant to climate science because the reconstructed sea surface temperature and salinity from geochemical records could offer new insights into climate change, especially in tropical and subtropical oceans.

I would also like to thank many people in Assoc Prof Wang Xianfeng’s research team, who provided great support and guidance for me to complete this project. Their support and guidance helped me improve my lab skills, data interpretation methods, report writing and the overall quality of this project. It would not be possible for me to receive this GUA global winner award without their generous help. This award is an honour that belongs to everyone involved.

How did you get interested in corals and climate change?

I have always been interested in interdisciplinary studies of environmental science research. Because I was specialised in ecology and ecosystems, I enjoyed studying marine ecology and corals. During my part-time student research assistant work in Assoc Prof Wang Xianfeng’s lab, I learnt how different geochemical proxies could tell great stories of the climate system. The combination of coral and climate proxy sounds really exciting and intriguing to me. Thus, I started working on this project - using coral geochemical proxies to calibrate sea surface temperature and salinity.

Your work was focused on the South China Sea. Why did you choose this study area?

Actually, the reason for choosing corals from Dongsha Atoll in the South China Sea (SCS) is that the subtropical climate has strong seasonal variability, which facilitates the calibration of temperature and salinity changes. Besides, Dongsha Atoll is distant from the mainland, so there is no major input of freshwater from rivers causing potential geochemical composition variability. Therefore, coral geochemical proxies from Dongsha Atoll are suitable to evaluate the accuracy of sea surface temperature and salinity calibrations using instrumental data.

Moreover, though trace element studies have been done on corals in many regions worldwide including the SCS, this study should be the first to investigate both trace elements and stable isotopes on corals at Dongsha Atoll. Based on previous findings around the SCS, it would be intriguing to compare our experimental data with their results and test the robustness of their conclusions. It will contribute to our knowledge of the past climate change and ocean circulation in the region, such as the Asian monsoon, El Niño–Southern Oscillation (ENSO) and Pacific decadal oscillation (PDO).

Could you describe briefly how you used corals to determine sea surface temperature and salinity?

Coral skeletons are made of calcium carbonate (CaCO3); they encrypt and engrave the chemical and physical properties of the surrounding environment as they grow. We measured the trace elements ratios in the coral skeleton, such as Sr/Ca, Mg/Ca and U/Ca, which have long been used to infer sea surface temperature. We also measured stable isotopes composition like δ18O. Coral δ18O records both sea surface temperature and salinity (seawater δ18O), while the seawater δ18O is a pure proxy for sea surface salinity and precipitation.

You are now pursuing a PhD in ASE/EOS. Is it on the same project as your FYP?

My PhD does not directly build on my FYP, but the concepts of geochemical proxies still apply. Meanwhile, other members of our research group will continue working on this Dongsha coral project. For the next stage of this project, we plan to extend the geochemical records further to the past, so that the calibration will be more accurate with more data support.

Very briefly, what is the topic of your PhD?

My PhD topic will focus on triple oxygen isotopes of tropical precipitation. We will measure stable isotopes, including d18O, d2H (dD), d17O, and the secondary parameters like d-excess and 17O-excess. I plan to examine the temporal and spatial patterns of stable isotopes from tropical precipitation samples, either for Singapore stations or overseas stations in Southeast Asia. I also aim to incorporate isotope-enabled global climate models (GISS or NCAR) to understand what processes control stable isotope variations, especially 17O-excess, in tropical regions.

Sun Huiwen studied “the plumbing system” that provides lava to Mt Marapi volcano in Sumatra, and her results were good news, the volcano is stable!

Why do you think your paper got selected among over 2.500 papers from universities worldwide? That is, what was it that made your study especially good?

For undergraduate research projects, I think being able to work with high quality, well-dated lava samples that follow a chronological timeline is a very rare opportunity. Together with advanced equipments such as the scanning electron microscope, I could produce visualisations of high resolution and quantitative results that allow detailed trend analysis. These are crucial when it comes to mineralogical studies. Also, I think having Mt. Marapi, which is relatively less well-studied compared to other major volcanoes as my project focus helped.

How did you get interested in volcanoes? Is this an interest you are planning to pursue further in the future?

During my first year in ASE I learned about igneous rocks in class. They are very different from the ordinary sedimentary rocks we normally see and it was really interesting that researchers could elucidate the environments within the magma chamber just by studying the appearance and the mineralogical composition of these rocks. The concept of understanding large-scale eruption events by observing changes in mineral phases from a microscopic perspective sounded super cool when I first discussed this project with Prof Caroline. Also, minerals are very pretty to look at!

Although I am still very interested in studying volcanoes, I decided to explore other fields in geoscience for my subsequent undergraduate research projects and I am currently doing a final year project related to the structural geology across the Indo-Burman Ranges. It is not quite related to volcanology, but the skills I have obtained from my previous research project are definitely helping me in terms of understanding the geology of my current study region.

Can you tell us about your winning research project “Determining changes in the plumbing system of Mount Marapi through time using image analysis of lava samples” and what you found?

Mt. Marapi, which is the focus of this project, is one of the most active volcanoes in Sumatra, Indonesia. However, due to its small-to-moderate scale explosive activities, it is less well studied as compared to other active volcanoes in the region, such as Mt. Merapi. To better understand the temporal evolution of Mt. Marapi’s plumbing system through time, I examined thin sections of lava samples (previously collected by my project supervisor and mentor) through detailed image analysis using optical and scanning electron microscope. The bulk of the data analysis focused on identifying chronological trends in whole rock composition and percentage by volume of several major mineral phases. The results showed no obvious change in bulk silica content, a constant recurrence of olivine through time, as well as minor fluctuations in other mineral phases which do not correlate with magma silica content. These observed trends indicate that Mt. Marapi is largely in a steady state, whereby newly formed magma is continuously replenished from molten mantle and gradual crystallisation of magma takes place during magma uprise through the well-established plumbing system.

All previous winners from NTU are listed here