With his passion for volunteering in the community as the driving force behind his company, founder of homegrown fragrance label Scent by SIX Mr Jason Lee (TIP/2010), uses fragrances to tell stories, connect with people and build relationships. Similarly, the co-founder of technology-first co-farming company Fefifo, Mr Chris Fong (TIP/2018), aims to help farmers grow higher quality food at lower cost and end world hunger by 2030.

Jason Lee’s entrepreneurship journey is captured in the six 'P's of perfume, purpose, passion, pandemic, plan and people. Entering the fragrance industry by chance after he said he was being cheated by his previous business partner, Jason subsequently gained a newfound calling that fuelled his passion for volunteer work, especially once the pandemic hit. "When I was volunteering in the community in early 2017, I got to know an old lady with severe dementia who was known to be bad-tempered to those around her," Jason recalled. After learning from her family members about her favourite activities, such as visiting the temple with her late husband, baking pandan cakes and drinking black coffee, Jason carefully put together various scents based on her life experiences before inviting her to take a whiff. Jason recalls: "Her eyes widened, and she started tearing up as she blurted out her husband's name. Memories started flooding back to her, and her family cried with her."

This vivid encounter remains with him. Jason was determined to make a difference in the lives of others and placed the importance of building people up at the heart of his business. "To me, success is not evaluated by our revenue and profits but by how much our people have progressed during their time with us," said Jason, whose company takes pride in sustainably sourcing quality ingredients from around the world. He added: "On days when I am unwell and have a blocked nose, it is strictly no smelling for me because I respect my commitment to all my clients. I will then make sure that I am completely well before I resume evaluating scents."

Recalling his Master of Science Technopreneurship and Innovation Programme (TIP) experience at NTU, Jason remains grateful to have learnt the value of empathy, especially when working with a talent-rich and diverse group. "It was a fruitful year of learning alongside outspoken people with brilliant ideas," he said. "TIP has also shaped my entrepreneurship journey by helping me align to a consensus and executing it well as a team through projects and business plan competitions."

Under Jason's leadership, Scent by SIX has won various awards, such as the Singapore 500 SME Company for the Year 2021 and the Singapore Prestige Brand Award 2020/2021: Winner Promising Brands.

"As an entrepreneur, it is important to be flexible and adaptable. While it is good to have a business plan, we should not restrict ourselves to it," said Jason, whose company continues to innovate and improved operations during the pandemic. To reduce physical contact while reaching out to customers, Scent by SIX pivoted by going digital.

Apart from work, the 37-year-old father of four always sets aside quality time for family bonding. Through his business, Jason hopes that his children will be able to "understand that life is more than just profits" and will "empower and benefit the less fortunate in the community".

The phrase "Fe-fi-fo-fum" – yelled repeatedly by the giant in "Jack and the Beanstalk", a famous English fairy tale – served as an inspiration for Chris, who named his co-farming company Fefifo farm. 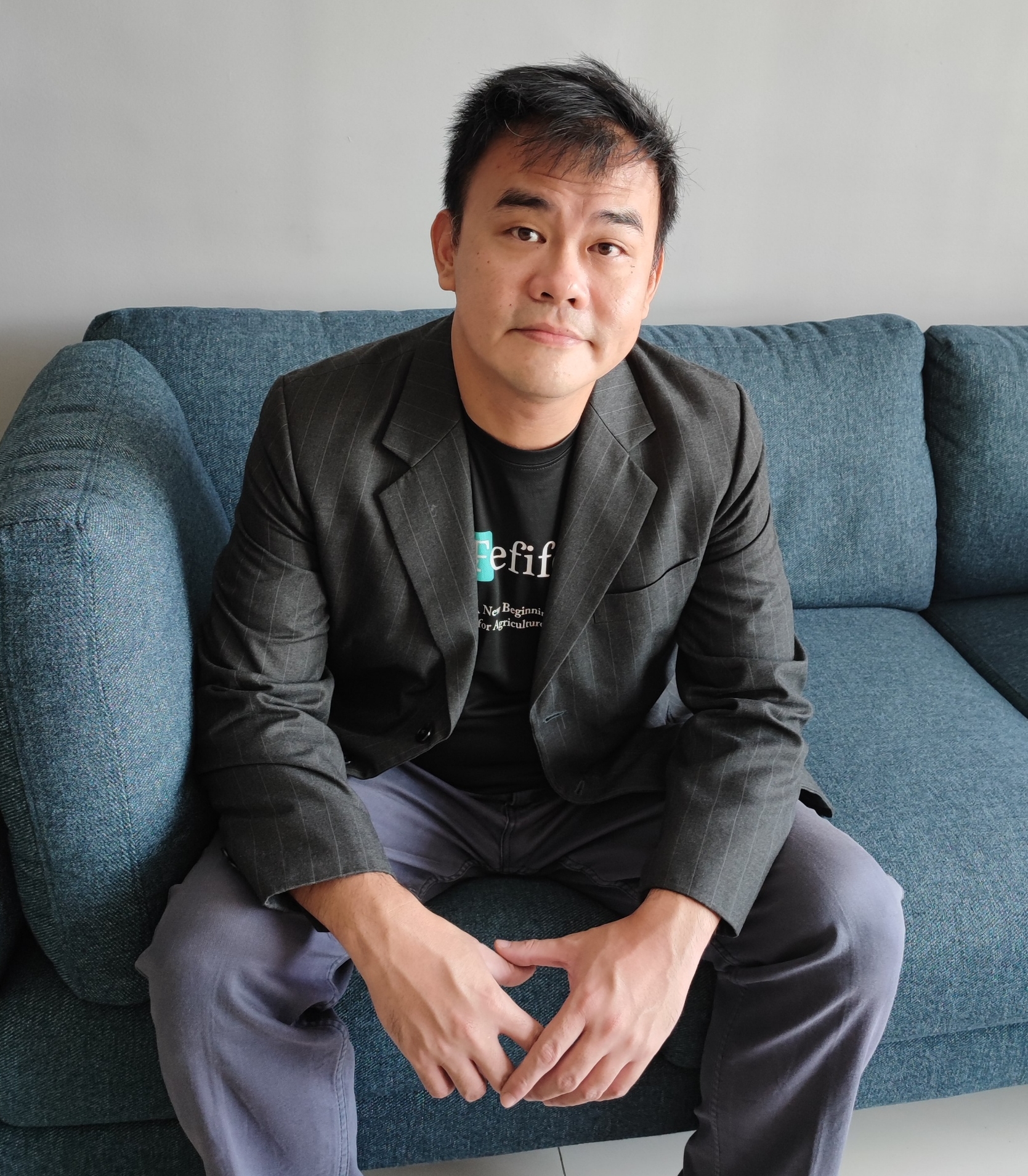 "Just like how the giant beanstalk grew from a few tiny magic beans to reach the golden egg beyond the clouds, our co-farming company seeks to transform smallholder farmers into agropreneurs and lift them up the income pyramid," said Chris.

During his one-year education journey at NTU, Chris is grateful to have learnt various skills that were crucial for his enterprise in the areas of entrepreneurship, business planning, sustainable leadership and strategy innovation.

Recognising the risk of a food crisis by 2030 due to the shortage of smallholder farmers, a dwindling agricultural industry plagued by fraud and the lack of interest in farming among the youth, Chris and his friends founded Fefifo farms in late 2018 with a vision to make ethical, sustainable and profitable smallholder farming commonplace throughout Southeast Asia.

For more than three years, the company has helped to transform smallholder farmers into agropreneurs through its innovative co-farming model that helps them kickstart their own modern farming business and grow crops that will eventually be sold to guaranteed buyers.

"Through our Digital Distributed Farms Network, the agropreneurs can focus on what they do best, farming, while we provide them with the necessary technology and infrastructure in their farm spaces," said Chris. "Our model enables Fefifo and our farmers to simulate cash flow and access the lucrativeness of their crops while eliminating fraud." With Fefifo’s ethical co-farming model, their farmers can reap profits even during the pandemic and receive an annual income of up to RM 70,000 (S$23,000), effectively moving these farmers from subsistence to profitability.

Chris and Jason were two of the six alumni speakers during the "From Innovation to Enterprise" symposium jointly organised by the Nanyang Technopreneurship Center and University Advancement Office.