The School of Art, Design and Media at Nanyang Technological University (NTU) is proud to present Everything is Data, a collaborative exhibition with the Centre for Game Design Research, of the Royal Melbourne Institute of Technology, at the School's ADM Gallery 2 from 14 August to 26 September 2015.

Focusing on digital technologies in art-making that permeate the boundaries between physical and virtual, and universal and personal, the exhibition features new works Mood of the Planet (Vibeke Sorensen, Singapore), Man A(Gibson/Martelli, UK) and Out of Space (Adam Nash & Stefan Greuter, Australia).

Together, they invite audiences to immerse themselves into new digital spaces of their own making, enticing viewers into a malleable world by drawing on the familiar tropes of place and time.  Engaging with digital technologies of communication and entertainment, and deploying acts of illusion and manipulation, the artists transform digital mediums into embodied datascapes.

Mood of the Planet is an interactive architectural installation in a form of a two-sided doorway that emits colored light and animates in reflection of the live emotions expressed by people all around the globe communicating through networks such as twitter. The doorway references developmental transformation and the metaphoric passing from one state to another.  It is also symbolic of growth and change that is analogous to the transformative effect that global communications technologies have upon our collective human condition. For the artist, it also also signifies human transformation of the environment, as this iconic form has been used architecturally across cultures throughout human history. ​

MAN A is a computer simulation, taking the procedural animation known as 'rag doll' to replace static death animations in first person shooter video gmes. Here the artist duo Gibson/Martelli create an endlessly collapsing rag doll figure. As a part of the MAN A series, the work takes military Dazzle camouflage as a point of departure. Unlike traditional camouflage which operates on the principle of concealment, dazzle camo uses complex arrangements of high-contrast, interrupted patterns of geometric shapes intended to confuse the calculation of a ship's range, speed and bearing in an enemy's optical gunnery rangefinder. MAN A creates a playful dialogue between machine-readable visual information and the primordial human impulse to recognise human figures in a landscape, motion-captured dance emerges from the patterns. ​

Out of Space is designed and programmed by Adam Nash, and is a playable abstract audiovisual virtual environment, using the Spacewalk system developed by Stefan Greuter. Immersed in an infinitely self-producing virtual space made of nothing but colour and sound, the visitor plays, flying and falling, creating little melodies and rhythms of sound and colour. Out of space, out of thin air, out of nothing, music and memories are made with virtual visions and vibrations. Art now is for play, for playing with, for playing.  Spacewalk, designed by Stefan Greuter, is a low cost experimental platform that enables participants to experience full-body immersion in virtual reality. The platform combines a commodity Head Mounted Display, with a depth based camera capturing movement of body and limbs within the space and makes Virtual Reality in small environments such as people's homes compelling, easy to setup and use. 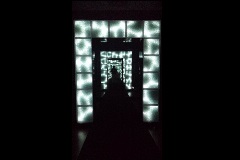 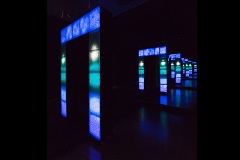 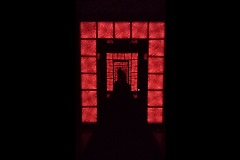 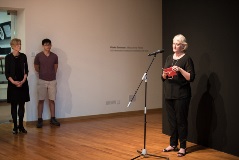 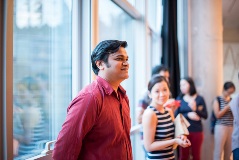 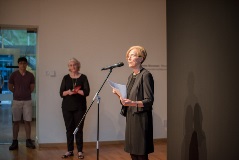 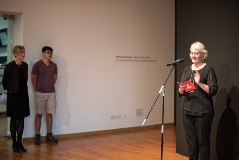 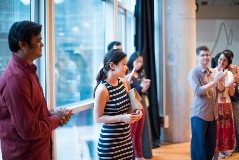 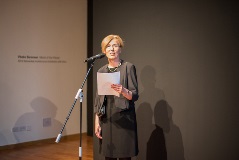 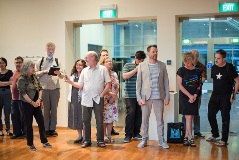 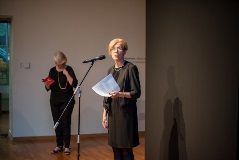 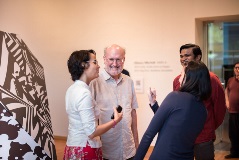 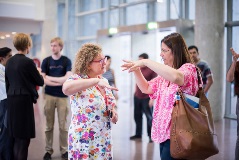 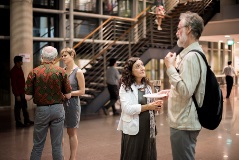 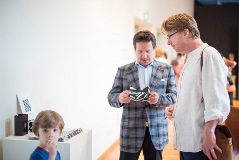 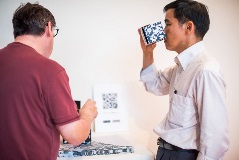 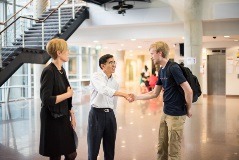 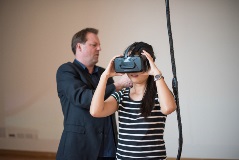 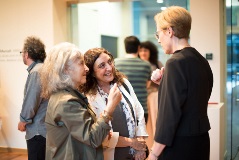 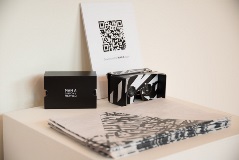 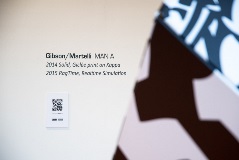 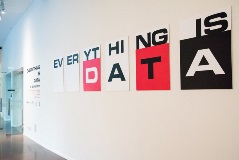 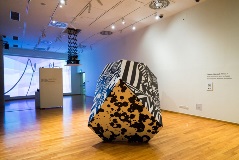 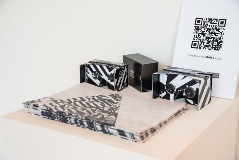 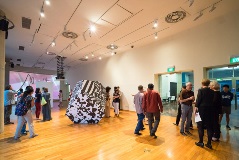 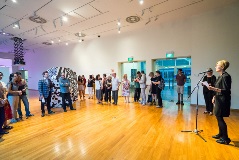 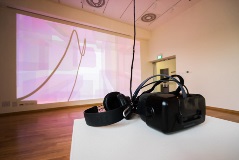 Vibeke Sorensen is an artist working in digital multimedia and computer animation, stereography, interactive architectural installation, and networked visual music performance. Her work in experimental digital media spans four decades and has been published and exhibited worldwide. She has a long history of interdisciplinary collaborations, art-science and art-engineering interactions including at the California Institute of Technology, Princeton University, and the San Diego Supercomputer Center/UC San Diego. From 1984-94, she was Founding Director of the Computer Animation Laboratory in the School of Film/Video at CalArts, and from 1994-2005 she was Professor and Founding Chair of the Division of Animation and Digital Arts (DADA) in the School of Cinematic Arts at the University of Southern California (USC). She is a 2001 Rockefeller Foundation Fellow in Film/Video/Multimedia, and in 2007 she was the Chair of the ACM SIGGRAPH Art Gallery: Global Eyes. Currently she is Professor and Chair of the School of Art, Design and Media at Nanyang Technological University in Singapore.

Gibson/Martelli comprises of artist Bruno Martelli and dance and visual artist Ruth Gibson. They create installations and performance spaces using computer games, virtual reality, print & video. The duo are based in London and see their practice as an investigation into figure and landscape, simulacra and the sublime. They exhibit in galleries, theatres and festivals around the world including The Detroit Institute for Art, the Barbican, SIGGRAPH, ISEA, The Royal Opera House, Royal Festival Hall & 52nd Venice Biennale. Bruno is a visiting lecturer at AA School of Architecture, Slade & Goldsmiths College while Ruth is a Senior Fellow at the C-DARE at Coventry University's School of Art & Design. The duo are studio artists at Dartmouth College USA in the autumn of 2015, exhibiting at the Jaffe Freide Gallery.

Adam Nash is an artist, composer, programmer, performer and researcher in digital virtual environments as audiovisual performance spaces, data/motion/affect capture sites, artificially intelligent, evolutionary and generative platforms. His work has been exhibited in prestigious galleries, festivals and online worldwide. He is director of the Playable Media Lab in the Centre for Game Design Research, and program manager of the Bachelor of Design (Digital Media), both at RMIT University.  Stefan Greuter is Foundation Director of the Centre for Game Design Research (CGDR) in the School of Media and Communication at RMIT. He holds a Doctor of Philosophy in Visual Communication and his multi-disciplinary research focuses on solving existing problems using innovative gaming technology. Stefan's research is published in a number of book chapters and journals articles, and has been showcased at a number of prestigious Games and Design conferences.​

A research-intensive public university, Nanyang Technological University (NTU) has 33,500 undergraduate and postgraduate students in the colleges of Engineering, Business, Science, and Humanities, Arts, & Social Sciences, and its Interdisciplinary Graduate School. It has a new medical school, the Lee Kong Chian School of Medicine, set up jointly with Imperial College London.

Besides the main Yunnan Garden campus, NTU also has a satellite campus in Singapore's science and tech hub, one-north, and a third campus in Novena, Singapore's medical district.