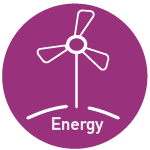 Currently, 80% of the world’s energy needs are met by burning fossil fuels as reported by The International Energy Agency. However, to meet the world’s rising demand for energy sustainably, there is a need to investigate clean and renewable sources of energy such as wind and solar power.
Powered by electricity, electric and autonomous vehicles emit significantly less pollution than vehicles running on fossil fuels.

At the same time, energy efficiency is an important factor in the design of infrastructure and buildings in order to minimise the amount of energy required to power them and reduce their impact on the environment.

Established in 2010, the Energy Research Institute @ NTU (ERI@N) integrates research across NTU in the context of the energy challenge, and then helps translate outcomes into industry and practice.

One of ERI@N’s flagship programmes, REIDS, is the largest system of interconnected micro-grids in South-east Asia and the first-of-its-kind in the region. Located offshore on Semakau Landfill, the REIDS system is powered by various sources such as wind turbines and solar panels.

Its microgrid system serves as a platform for companies to test research projects that are powered by renewable sources of energy under real-world conditions. An example is a wind turbine developed by the French firm ENGIE through its local research arm ENGIE Lab Singapore in collaboration with ERI@N. The massive wind turbine stands on Pulau Semakau, about 8km south of the mainland, and generates enough wind energy to power as many as 35 Housing Board flats annually.

To deliver cleaner energy, Surbana Jurong and NTU Singapore are developing an integrated urban power generation system that can harvest, store and use cold energy from the regasification of Liquefied Natural Gas (LNG), with the option of using liquefied hydrogen as an additional source of energy.

Several research centres and corporate laboratories in NTU are working on developing autonomous and electric vehicles. In 2019, the Centre of Excellence for Testing & Research of Autonomous Vehicles (CETRAN) was launched to test self-driving vehicles. The centre which has a test circuit complete with traffic lights and mock skyscrapers, is at the heart of Singapore's push to become a hub for autonomous technology.

After going through multiple tests at CETRAN, the world’s first autonomous full-sized bus ready for the road was launched. The research was a collaboration between NTU and Volvo.

Leveraging the expertise of corporate partners who are leaders in the industry of automotive technology, corporate laboratories develop autonomous vehicles ranging from food delivery robots to aerial drones. Since its inception in 2015, the ST Engineering-NTU Corporate Lab has initiated autonomous mobility projects in the areas of unmanned surface and aerial vehicles. The Continental-NTU Corporate Lab has developed a food delivery robot, called Corriere, that can navigate paths, cross roads, clear building security turnstiles and take the lift on its own.

The EcoLabs Centre of Innovation for Energy was established to build and accelerate deep-tech energy Innovation capabilities in Singapore to support the nation’s transition to sustainable sources of energy. One of its projects is a collaboration with ERI@N spearheaded by tech start-up Ecotech Mobility Pte Ltd to develop a high-power density charge and converter system for electric vehicles.

This new power system will be piloted in a first of its kind fast-charging platform called the “High Power Energy Plaza”, which can charge multiple electric vehicles quickly with its high-power DC chargers, with capacities up to 550 kilowatts (kW).

It can also support low-power applications such as charging of electric bikes, cars and light commercial vehicles.

Message to the NTU community and media release