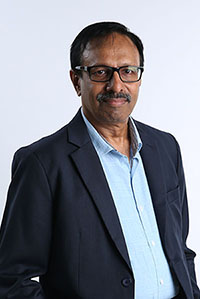 I joined NTU in May 1992 shortly after the beginning of the Materials Engineering undergraduate course under the School of Applied Science (SAS) which also offered the Computer Engineering course. The course was founded by Professor Fong Hock Sun who came over from NUS at the time of the first NTU president, Dr Cham Tao Soon. I was the 12th faculty member to join the pioneering group in ME to kick start the undergraduate program. Only two of this pioneering group are still in MSE today.

Before moving to NTU, I was happily working in the corporate research centre of an aluminium mining company in Australia, namely Comalco. The move to NTU (and Singapore) was actually a personal gamble as I did not know how I would fit in a university environment and in the Singapore society about which I have heard many tales, good and bad. I thought of taking up this challenge to add some excitement to my life as I was getting too comfortable in my previous job. I intended to do one or two contracts in NTU and then return to Australia, but the One above all of us decided otherwise. I ended up working in NTU for 28 years, which is the greatest chunk of my life, and retired in May 2020.

The early years in NTU were very challenging with curriculum and laboratory development, student and staff recruitment, program publicity among schools and employers etc., besides teaching and assessments. As the program progressed from Year 1 to Year 4, new courses came on-line but the faculty strength did not increase proportionately. All of us ended up teaching more and more courses every year. It was worse for me as the whole job function was new. I had to struggle to keep up with the work pressure and demands while still presenting a pleasant façade to the students.  Fortunately, the student numbers were small; the first intake in 1991 had only 55 students and the second one about 65. We remained around this intake numbers for about 5 years and then the university decided to increase the number steadily to 120 even though none of us wanted it. The staff-student rapport was very good in the early years and the teaching practice was old-fashioned, classroom-type interactive learning. Internet-based education has not taken off then. Only when student numbers increased beyond 120, in early 2000, that we lost our golden touch with students. Besides, the introduction of Blackboard platform for digital learning and program broadening to include significant proportion of non-materials courses, worsened the rapport with students. Thereafter, students were exposed to many faculty from different schools, which was good for them, but did not help in maintaining the strong bond with our MSE faculty.
It is useful to record the building and facilities that was available to us in the early years so that the latter batch students could appreciate the challenges and hardships faced by both the pioneering faculty and the early student batches. Our initial location of SAS was in the old Nanyang University building opposite the Chinese Garden. This indeed was a picturesque location, but the facilities were not really suitable for teaching an engineering course. I was given the responsibility to supervise the development of the Materials Processing Lab, one of only four laboratories we had then. This laboratory was located in the garage of this old building with makeshift air conditioners and power supplies. We did not even have a scanning electron microscope. Our students had to go to the School of MAE to use theirs at the mercy of MAE staff. In 1996, the whole SAS shifted to Block N4 when the South Spine construction was completed and EEE moved out of this block. This move felt like a heavenly elevation; at least we were able to work in a building designed to conduct engineering courses and had decent offices for us to work in. Then, we bought our own electron microscopes, diffractometers, spectroscopes and became independent of other schools for materials characterization. Our laboratory numbers increased and space became more generous. We shared the block with our Computer Engineering colleagues. Subsequently, Block N4.1 was constructed and we moved into the current, very cosy environment for teaching, learning and recreation. We broke off from SAS to become a fully-fledged, independent School of Materials Science and Engineering in 2000. Now, we have the best material characterization facilities in the university, which we fully deserve.

We have become one of the most respected materials schools in the world and I was fortunate to be associated with its founding and transformation to the various stages. Proper research in MSE started in early 2000s; my first PhD student graduated in 2004. My memory is that I was more elated at this graduation than the student. Now the school is buzzing with undergraduate students, PhD students and researchers but we should never forget our humble beginnings and the effort and sacrifices made by the pioneering staff and students. All this was possible because of the generous support of the university and the Singapore Government.

The progress and development of MSE also brought benefits and pleasure in my later years in NTU. When I go out to the industry for visits, I come across my former students holding responsible positions in the organization, and even supervising our Attachment students. Some of my former PhD students won job offers from reputable overseas universities and have themselves become respected professors, with their own PhD students. It has been pleasant to visit them in their countries and give invited seminars to these overseas students - my grand students.

Another unique experience I have had is to see my former students joining NTU-MSE as faculty after obtaining PhDs and with research experiences elsewhere. They started teaching alongside me as colleagues. I had the pleasure of working with many such faculty in MSE, one of whom later became the Chair of MSE – and to be humorous, one of them became my boss.
I had the great opportunity to serve in many different capacities in NTU, not only in teaching and research. This was the golden time of NTU when it transformed from a mere teaching institution unknown outside of Singapore into a reputable international university of very high standing in the world. Singapore and NTU will remain the centrepiece of my biography.