Electroencephalography (EEG) is the neurophysiological measurement of electrical activity in the brain as recorded by electrodes placed on the scalp or, in special cases, subdurally or in the cerebral cortex. The resulting traces are known as an electroencephalogram and represent a summation of post-synaptic potentials from a large number of neurons. How does EEG work ?

In conventional scalp EEG, the recording is obtained by applying electrodes to the scalp using a conductive gel or paste, usually after preparing the scalp area by light abrasion to reduce electrode-scalp impedance. Many systems typically use electrodes which are each attached to an individual wire.
Some systems use caps in which electrodes are embedded. This latter method is particularly common when high-density arrays of electrodes are required.

What is EEG used for?

The use of EEG in neuroscience research delivers a number of benefits. One is that EEG is non-invasive for the research subject. Furthermore, the need to restrict the subject‘s movements is clearly lower than in other fields of neuroscience such as functional magnetic resonance imaging (fMRI).
A further benefit is that many EEG applications record spontaneous brain activity, which means that the subject does not need to be able to cooperate with the researcher (as is necessary, for instance, during behavioral testing in neuropsychology). Also, EEGs have a high temporal resolution compared with techniques such as fMRI and PET and are capable of detecting changes in electrical activity in the brain on a time scale in the millisecond region.

Core EEG System
The core EEG system at CoNiC is a state-of-the-art BrainAmp MR plus 64-channel system (Brain Products GmbH) which is capable of EEG acquisition alone, as well as acquisition of EEG and fMRI data synchronously as multimodal imaging. It includes "MR safe" electrode caps and BrainAmp MR series amplifiers – made from non magnetic materials and is dedicated for use inside the scanner bore.

Stimulation Equipment
During the acquisition of EEG and fMRI data synchronously, Visual and Auditory Stimulus equipments available with core MRI systems in CoNiC can be used.

Response Equipment
During the acquisition of EEG and fMRI data synchronously, Response equipments available with core MRI systems in CoNiC can be used. 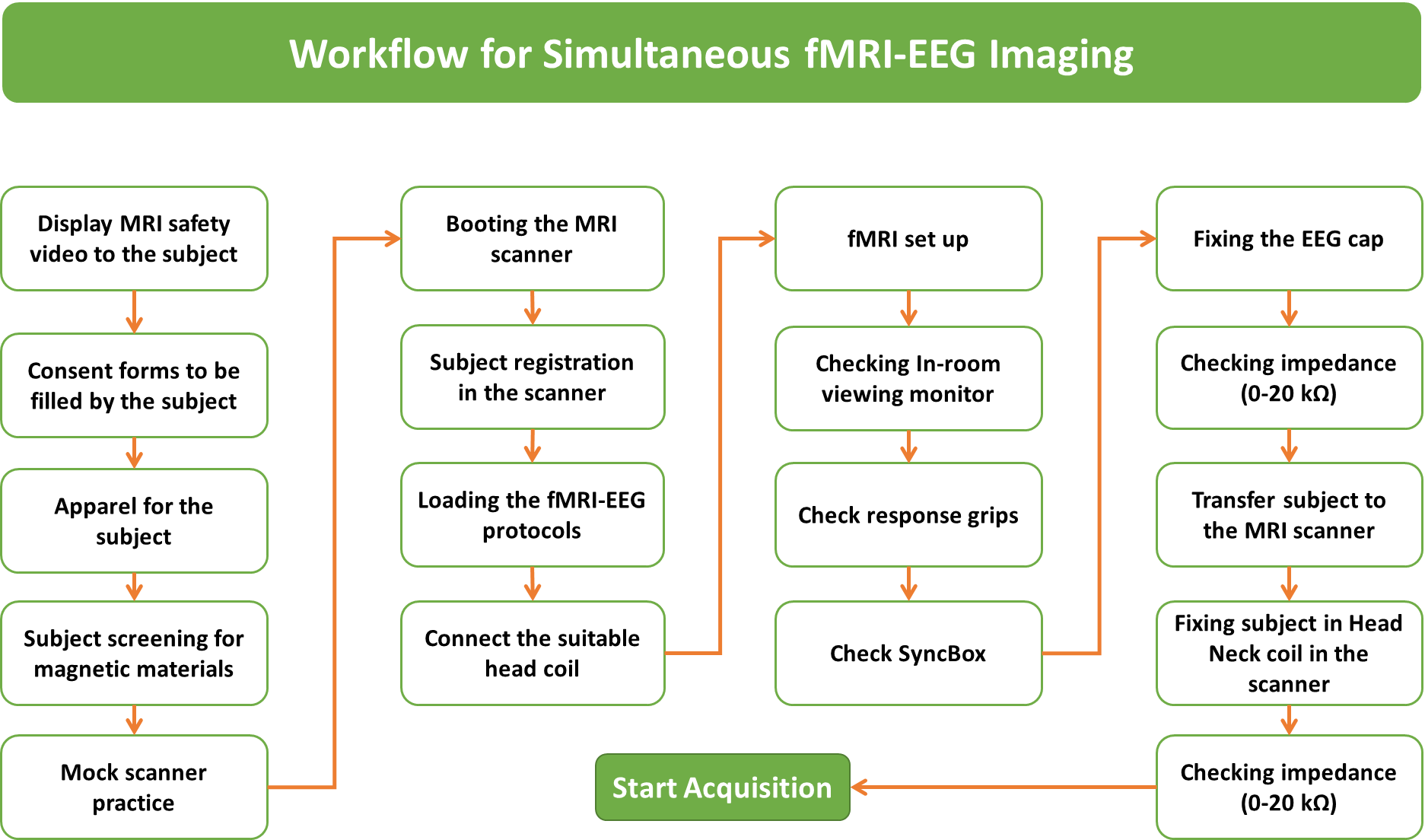 Some of the major application fields in EEG based reasearch are:
EEG-fMRI is a multimodal neuroimaging technique which enables the acquisition of EEG and fMRI data synchronously. Scalp EEG reflects the brain‘s electrical activity with high temporal resolution, more specifically it represents post-synaptic potentials in the cerebral cortex. fMRI detects haemodynamic changes throughout the brain known as the BOLD effect (Blood Oxygen Level Dependent).
Thus the simultaneous fMRI-EEG imaging has a great potential in understanding the neural basis of brain function & dysfunction with high spatial-temporal resolution.

MEG is safe for children and adults. EEG scan is noninvasive and painless with no injections, radioactivity or strong magnetic fields (except with simultaneous acquisition of EEG and fMRI). In conventional scalp EEG, the recording is obtained with caps in which electrodes are embedded using a conductive gel or paste, usually after preparing the scalp area by light abrasion to reduce electrode-scalp impedance.
We are here to provide you the safest environment and make you aware about the potential safety hazards.

Safety Instruction for Simultaneous Acquisition of EEG and fMRI

Careful preparation of the subject in accordance with established safety guidelines for EEG examination in the scanner is mandatory.

Due care and attention is needed to avoid potential health risks. 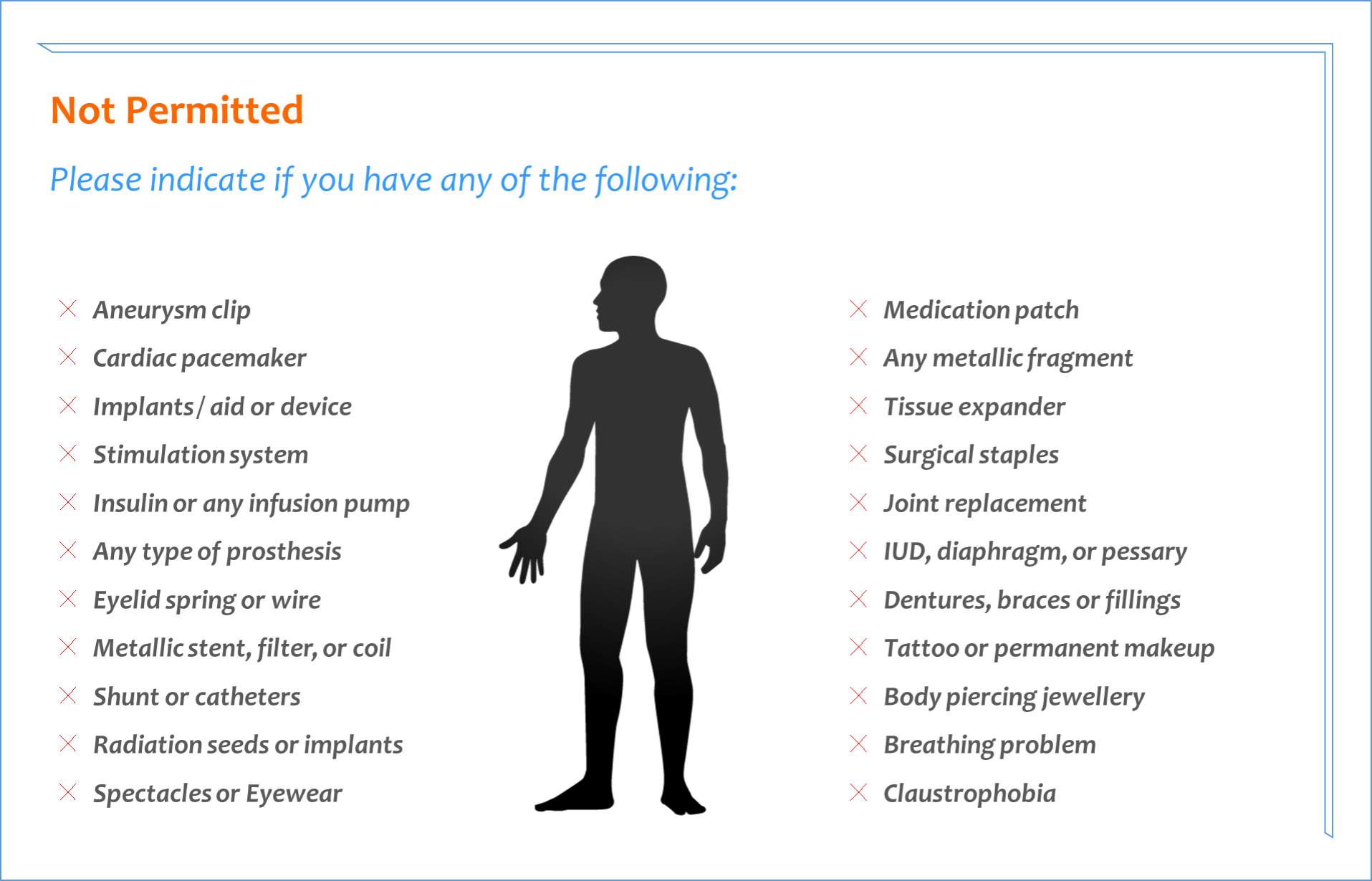