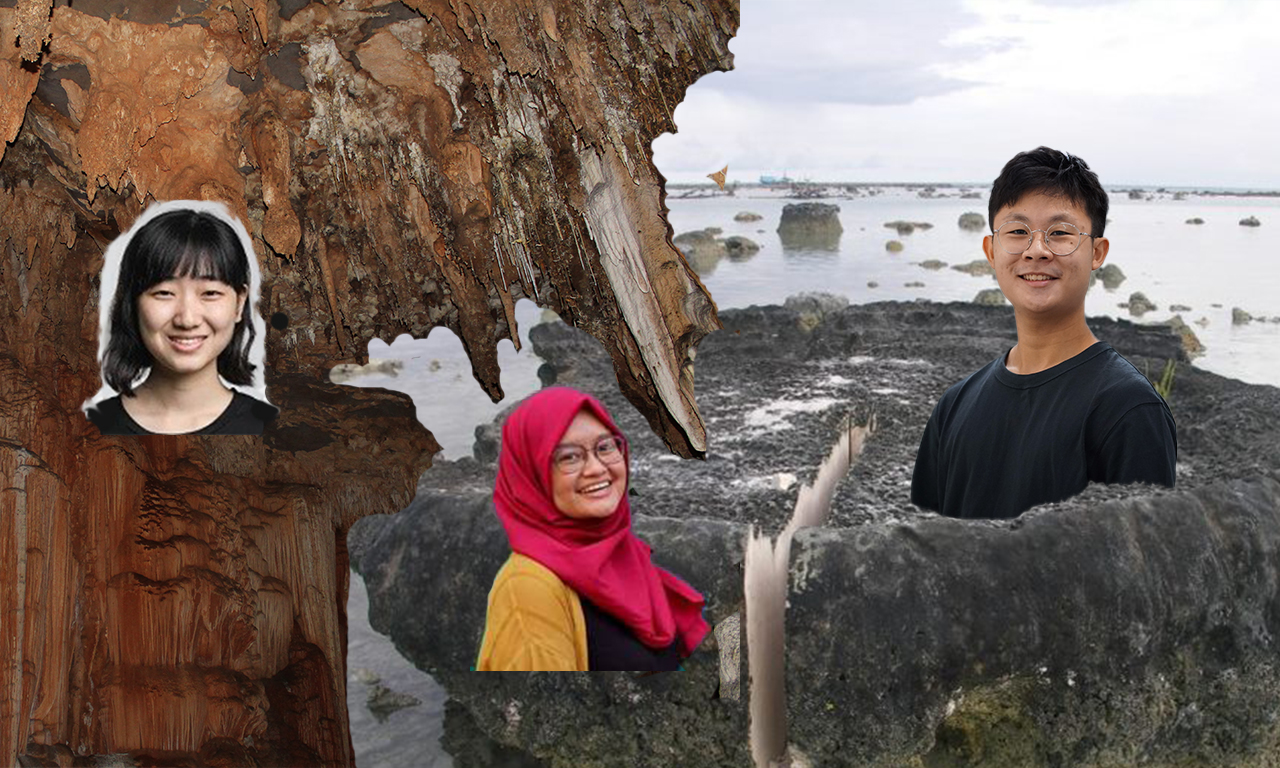 Three best student posters awards went to students from ASE at the Asia Oceania Geosciences Society (AOGS) annual meeting in August this year. Congratulations all three to your achievements!

Wong Minn Lin is a PhD student working with Assoc Prof Wang Xianfeng in the Isotope Geochemistry Lab. She won AOGS Best Student Poster Award in the Interdisciplinary Geoscience category. She has recently published her study in Quarternary Science Reviews.

Congratulations to the deserving awardees!

ASE Comms caught up with Minn Lin, Gina, and Shi Jun to ask about their conference experience and their research:

Q1: Congratulations to winning the best student poster awards! How did you enjoy the AOGS meeting (held online of course)?

Minn Lin: Attending AOGS online was a bit more awkward, but I enjoyed the fact I could much easier jump in and out of sessions and so I found myself attending a larger variety of talks than I typically would.

Gina: AOGS was a great conference and provided an opportunity for showcasing regional-specific cutting-edge research in the earth sciences. I enjoyed watching some great talks and poster sessions from speakers from around the world.

Shi Jun: This was my first conference and I was initially nervous to speak in front of students and researchers from all over the world. However, it was a rather interesting experience listening to the presentations by researchers from so many different fields in the geosciences.

Q2: The goal of AOGS is to “promote geosciences and its application for the benefit of humanity, specifically in Asia and Oceania and with an overarching approach to global issues.” Briefly, what was the topic of the poster you presented at the meeting?

Minn Lin: My poster presents a new speleothem record from central Brazil that suggests the South Atlantic Convergence Zone (SACZ) did not vary significantly in its intensity or latitudinal position over the past 7000 years, unlike the rest of the South American Summer Monsoon domain. We suggest that the SACZ is dominantly influenced by sea-surface temperatures in the subtropical South Atlantic, which stabilizes the latitudinal position of the moisture convergence over central Brazil.

Gina: My topic was on using coral microatolls in west Luzon Island of the Philippines to understand tectonic deformation in the region. Coral microatolls provide a detailed record of sea-level changes and through it, we can infer land-level changes. The coral data from the La Union province dates back to ~1000 yr BP and we found evidence of coseismic subsidence on the order of ~36cm. In the poster, I also attempt to model coseismic events and causative faults that could produce this vertical land record we find in La Union.

Shi Jun: Using photogrammetry, I created 3D models and digital elevation models (DEMs) of coral microatolls to study the variability in their highest level of survival (HLS). HLS refers to the upper limit to which microatolls can survive, controlled by extended periods of extreme low water; these corals grow in response to the lowest tides and record changes in relative sea level. We combined the models with field measurements, generating highly-precise elevation profiles of the corals. This allows us to compare the corals’ elevation across different sites, to observe and quantify HLS variability between and within the corals to determine if local environmental conditions such as boat wake and sunlight angle may have contributed to it. It is important to recognise the factors that may influence HLS variability to allow for better quantification of the uncertainties in reconstructions of past relative sea levels.

Q3: Has your research been affected by the pandemic and SMM, travel restrictions etc.? If yes, how?

Minn Lin: My research has indeed been affected by travel restrictions. I had plans to explore the use of a climate model with an overseas university, however, was unable to travel for this. Luckily, I still managed to get the help from collaborators to remotely carry out my project. It was much more difficult to do it online, but this also forced me to have a more self-directed and independent learning.

Gina: Yes, a lot of my research is fieldwork-based and overseas. Originally I planned to have another fieldwork-based chapter for my PhD where I would collect data from an overseas site. With the pandemic and travel restrictions, we had to alter my plans so that I didn’t have to do research abroad. So now my research has taken a more modeling-based approach which gave me the chance to broaden my skill set.

Shi Jun: We had to constantly adapt to the changing group size limits by adjusting our fieldwork plans accordingly. Thankfully, I was not affected by the travel restrictions as my site is in Singapore (Sentosa and St John’s Island).