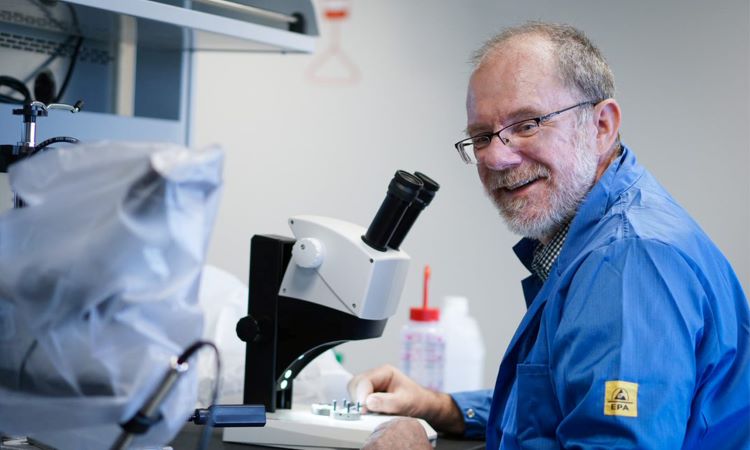 Prof Redfern loading a diamond anvil cell in the lab.

In a recent study published in Nature Communications, Prof Simon Redfern and his team show that subduction zones can be carbon sinks, contributing to the long-term storage of carbon in the deep Earth and thereby keeping it from re-entering the atmosphere as CO2. The flows of carbon between the Earth’s crust and the atmosphere are important processes regulating global atmospheric CO2 concentration.

In the study Farsang et al. describe a previously uncharted chemical process through which relatively unstable carbonate mineral is converted to magnesium carbonate, which is much more stable. The recognition of the importance of this stable form of solid magnesium carbonate could potentially lead to the development of new carbon capture methods, which aim to absorb CO2 from the atmosphere and move it to long-term storage in rocks to mitigate climate change. “If we can accelerate this process faster than nature handles it, it could prove a route to help solve the climate crisis.” said Prof Redfern.

The element carbon is found in all living things, in rocks, the Earth’s crust, soil, water, and in the atmosphere (as CO2). The Earth system regulates the amount of CO2 in the atmosphere through flows between all these carbon pools, for example, uptake of atmospheric CO2 by dissolution in oceans and by photosynthesising organisms removes carbon from the atmosphere by causing a flow of carbon into the oceans and into plant biomass, and eventually into carbonate rock.

Samples are squeezed between pairs of diamonds to reach the pressures experienced deep in the Earth.

Subduction zones are geologically active areas, prone to earthquakes and volcanic eruptions. We find them for example in Indonesia, the Aleutian Islands, and elsewhere around the Pacific in the ring of fire. But the subduction process is not just the cause of the earthquakes and volcanoes, it also plays a role in the global carbon cycle, a role that this new study has revised.

Large amounts of carbon are removed from the Earth’s surface when ‘swallowed’ into the mantle at subduction zones. It has long been thought that this carbon sink was largely offset by the carbon that is released through volcanic eruptions, when gasses are released from the Earth’s interior.

So what happens to the stable magnesium carbonates, and how long can they hold on to the carbon? Time scale of residence of the carbon in the deep Earth is uncertain, says Prof Redfern, but if it is taken down deep into the Earth we know that some, if not all, of it will be turned into diamonds. The time scale of cycling of deep mantle material from oceans to mantle and back again is probably around 1 billion years.

How phytoplankton survive during the long polar night