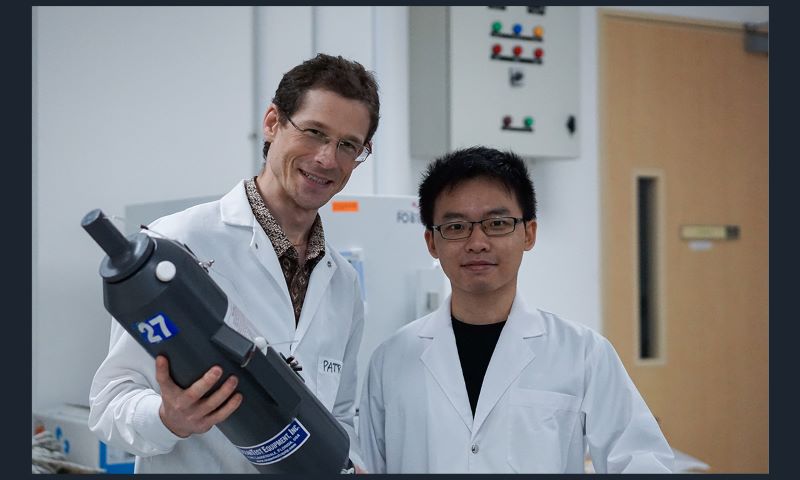 We are all familiar with how burning fossil fuels is adding CO2 into the atmosphere causing global warming and climate change. Ocean acidification has been called “the other CO2 problem” and refers to the global decrease of the pH of the oceans. Both of these problems are caused by shifting the balance of carbon between different carbon pools, such as the atmosphere, the oceans, soil and oil reserves. Scientists from ASE recently published a study in Journal of Geophysical Research: Oceans, in which they used isotopes to trace the path of carbon atoms from land to sea and air in and around Singapore.

Most terrestrial environments store carbon to some degree, but tropical peatlands are particularly large carbon pools, packed with ancient plant material. Peatlands naturally leak carbon to rivers because part of the carbon from dead plant parts dissolves into water. The resulting dissolved organic carbon (DOC) is carried by rivers to the sea, but scientists do not yet understand well what happens to soil-derived DOC in the ocean. Finding out the fate of the peatland carbon is an important part of the global carbon puzzle, as Southeast Asia’s peatlands deliver around 10% of the global land-to-sea input of DOC.

The study was led by Yongli Zhou, Ph.D. student in ASE’s Marine Biogeochemistry Lab. One of the questions he and the other researchers asked was whether the DOC leaking from peatlands decomposes to carbon dioxide (CO2) at sea. By decomposing to CO2 in the sea, the peatland DOC might contribute to ocean acidification, but would eventually also be released to the atmosphere and thus contribute to global climate change. Picking apart how much of the DOC in coastal seas originated from land and how much of it was produced by organisms in the sea is challenging – but the two stable isotopes of carbon can provide the key. DOC originating from land contains less of the heavier isotope 13C, and more of the lighter isotope 12C. Analysing the ratio of the two isotopes in DOC and in the dissolved CO2 allowed the team to distinguish the ultimate origin of the carbon.

The researchers used different stable carbon isotopes to to trace the origin of marine carbon.

Zhou et al. were able to show that 60–70% of the DOC from peatlands is quickly decomposed, leading to high rates of CO2 emission from these coastal seas. Another interesting observation from the study was that this decomposition of peatland carbon leads to a seasonal acidification effect in the Singapore Strait; during the May to September southwest monsoon season, seawater pH decreases by around 0.15 pH units as ocean currents carry DOC- and CO2-rich water through Singapore. The bad news is that the local source of acidification from peatland DOC decomposition adds on top of the global phenomenon of ocean acidification, which will lead to a “double whammy” of acidification.

As if that was not enough, an additional study led by Asst. Prof. Patrick Martin shows that absorption of sunlight by the remaining undecomposed DOC reduces the amount and spectral quality of the available light underwater. This is an issue for marine ecosystems that rely on sunlight to fuel photosynthesis e.g. by seagrasses, corals, and phytoplankton. During the southwest monsoon, the DOC lowers the total amount of light underwater and shifts the spectral quality such that there is less ultraviolet and blue light relative to green and yellow light. While the peatland DOC can thus be a beneficial “natural sunscreen” by absorbing ultraviolet light, it also absorbs the blue light that is most valuable for photosynthetic organisms. The peatland DOC input thereby contributes to limiting how deep down corals and seagrasses can grow.

“These studies show that long-term monitoring of seawater chemistry is important, and that Singapore is a very interesting location for studying coastal carbon cycling”, Asst Prof Patrick Martin sums up.

By Anna Lagerstroem with help from Patrick Martin

How phytoplankton survive during the long polar night