Mr Clarence Chua (WKWSCI/Class of 2008) says he’s been passionate about nature since he was a child. He is now the proud owner of a 1,500 square feet rooftop farm, The Sundowner. Perched atop a conserved shophouse in Siglap, the farm is starting to bear fruit after a year of labour. Kaffir limes and mulberries, to be exact. Next to them, rows of Mediterranean herbs rustle in the breeze. Nearby, a bee buzzes lazily past.

The crops grown on the farm are for personal consumption and pizza-making sessions that his wife runs in the yard of  the two-storey shophouse, says the 37-year-old urban farmer and beekeeper. Although, when the harvest is bountiful, the Spanish and Thai restaurants next door get bundles of sweet and Thai basil. 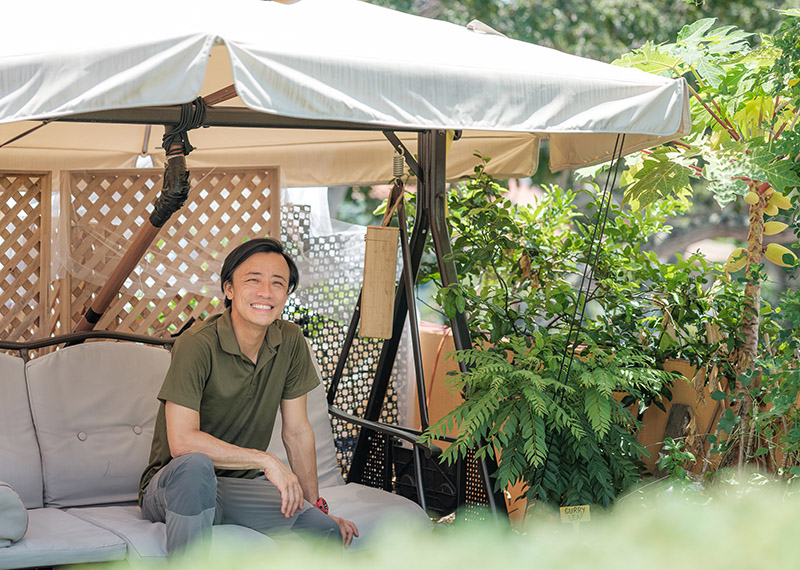 Clarence Chua's rooftop farm at a Siglap shophouse is home to over 20 types of crops.

Clarence also uses the farm as a platform to help city dwellers reconnect with how sustainable food can be produced through organic farming workshops.

During these sessions, participants get acquainted with soil critters – earthworms, beetle larvae, and millipedes – and learn how they are great for plant health. They also don bee suits and observe the bees at work with magnifying  glasses. At the end of the session, participants get a taste of herb foraging to garnish their drinks.

“We want to show how everything in nature is connected, from soil health to healthy plants that, when pollinated by bees, bear healthy and nutritious fruits and flowers for our consumption,” says Clarence. “We get our participants to bring their fruit and vegetable scraps so we can teach them how to make compost using the scraps. Some of them still bring their scraps to us months later.”

Adding that the farm also occasionally collects coffee grounds from cafes in the vicinity to feed their plants, he says: “These concepts of sustainable food production resonate with those in their 30s or 40s who have more time and money on their hands, and who can effect change in their own spheres of influence.”

Tending to plants on a rooftop and beekeeping may sound incongruous with his journalism training, but the communication studies graduate begs to differ. “Journalism, in particular, taught me what I feel is one of the most important skills in life: communicating ideas effectively,” he says, adding that he has been approached by green investors who like The Sundowner’s message of sustainability.

Starting The Sundowner was serendipitous. Clarence, who also has his own landscaping company, found the shophouse in July 2020 while looking for permanent quarters for his employees whom he had moved out of various foreign worker dormitories after the first COVID-19 cases were detected there. 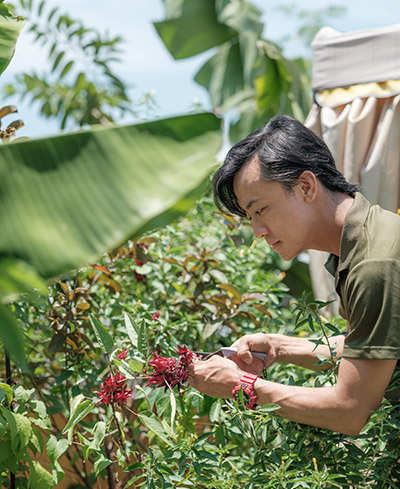 Clarence was bitten by the nature bug in primary school after joining a Young Scientist Badge programme.

His landscaper’s instincts saw the underutilised rooftop transform into an organic farm that is now home to over 20 types of crops, from native Asian varietals such as laksa leaves and mulberries, to finicky Mediterranean herbs like sage and rosemary. It also has flowering plants like the coral vine, a favourite of honeybees.

No pesticides are allowed on the farm, making it an oasis for sunbirds, bees, and the cochin chickens he recently introduced on his farm – chicken rearing is legal on private residential property – for rearing workshops. Chickens play an ecological role in enriching the soil, controlling plant pests, and removing the need for plant pesticides, he explains.

Bitten by the nature bug

Clarence's love affair with plants, fishes, and all things nature began with the Young Scientist Badge programme, in which primary school pupils can earn badges through completing a list of projects. He proudly shares that he owns the Young Botanist and Young Entomologist badges.

“To earn these badges, we were tasked to grow plants, collect bugs, and appreciate nature all round. That carried through into catching spiders and other bugs in secondary school, and later in junior college, joining the outdoor adventure club to be among plants and wildlife,” says the father of two who counts tarantulas, snakes, and scorpions  among his former pets.

These days, Clarence is busy trying to make the two to three species of rescued honeybees feel at home at The Sundowner – bees are known to abscond when unsatisfied with the hive.

“We have salvaged nests from colonial bungalows and landed properties. Bees also like the fine life!” he quips.

Read more about a new crop of farmers growing in the city: