Mr Dhruv Khanna (TIP/Class of 2014) is always on the lookout for possible solutions to real-world issues.

When he had the opportunity to observe and learn from a hydroponics start-up in Singapore for two months, his interest was piqued. Hydroponics requires much less water and land than conventional farming, and since it does not require oil, no pesticides or chemicals are used either. Dhruv, who graduated with a Master's in technopreneurship, co-founded Triton Foodworks in India.

He returned to India after graduating from NTU with a Master of Science in Technopreneurship and Innovation in 2014 and co-founded Triton Foodworks with two friends with the aim of moving towards a “food-secure world”. The company operates hydroponics farms and has a retail brand of fresh produce called ChopChop. They are now exploring breaking into the North American market.

Dhruv, 31, oversees the company’s business development and farm operations. “I absolutely love the way I get to be close to nature due to my work,” he says.

Technology has allowed Triton Foodworks’ farms to grow up to 300 times more produce using 98 per cent less water. To date, the company has saved over 10 billion litres of water, says Dhruv.

This achievement has led him and his co-founders to be named in the Forbes Asia 30 Under 30 list in 2019, and the Forbes India list in 2020.

It’s not all a bed of roses, though, Dhruv cautions: “Farming requires more patience than other industries. There's a lot of research and development required and you might see a lot of crop failures before getting the technique right.” 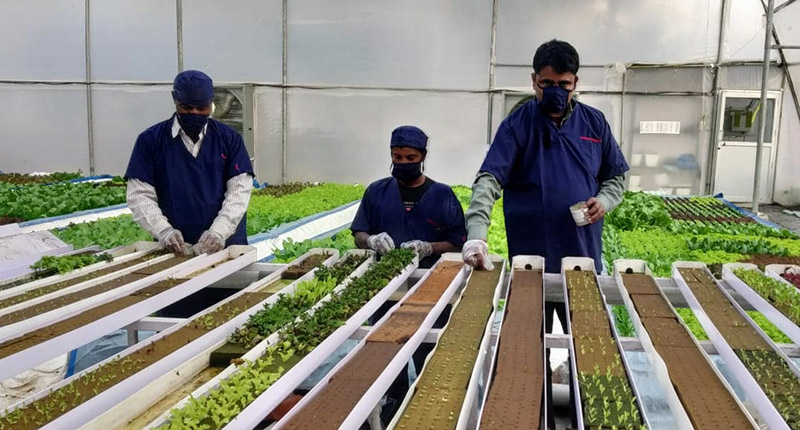 “That being said, farming is the ultimate entrepreneurial experience. It lets you see the miracle of a plant right from the seed stage to a fully grown crop that helps feed the world,” he adds.

Read more about a new crop of farmers growing in the city:

Raising the roof on homegrown crops