The NTU campus is frequently cited as among the most beautiful in the world. With an air of romance around it, it has been where sparks have ignited, love found and life partnerships formed. A popular site with Instagram users as well, many couples have returned to capture the scenic ambience for their wedding photographs. Just as picturesque is the Novena campus where NTU's Lee Kong Chian School of Medicine is located. It features a 1924 heritage building that was carefully restored to preserve its Palladian style and is where Dr Delwyn Lim and Dr Weishan Lim met as trainee doctors. 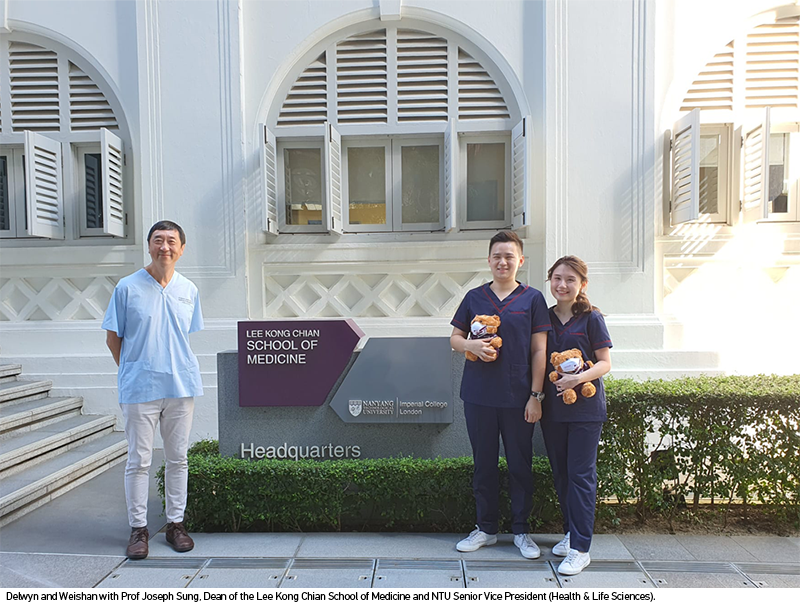 Being the first couple in the inaugural Class of 2018 batch of students at the NTU Lee Kong Chian School of Medicine was, at times, awkward. Once word got out that Delwyn and Weishan were dating, the teasing from classmates followed.

“Our class was small, so everyone knew. But the teasing stopped when many more new couples within the class cropped up, and it became their turn to get teased,” laughs Weishan.

The classmates bonded over mutual interests in music and sports, spending hours jamming together or perfecting their serve on the tennis court. Before long, sparks started to fly.

The couple married in December. They had their pre-wedding photos taken at the Novena campus in their scrubs.

How did you meet?
Weishan: We met in 2013, on the first day of school in August. During orientation, we were assigned to the same team-based learning group at the same table and became friends almost immediately.

What was your first impression of each other?
Delwyn: Three words. Lively, outgoing and personable.
Weishan: I thought he was quiet and aloof – but I was soon proven wrong!

What qualities do you like the most in one another?
Delwyn: I love that she is always kind, generous and never hesitates to lend a helping hand to everyone around her.
Weishan: He always puts me and family as priority above others (even himself), and this selflessness is something I really admire and appreciate.

Where is your favourite date spot on campus?
Delwyn: We had to study a lot, so most “dates” ended up becoming study dates. We enjoyed going to one of the study rooms outside Lee Wee Nam Library as it was very conducive. The beautiful and light-filled medicine library on the 20th storey of the Novena campus also became one of our favourite study-date spots.

Are you both working in the same hospital?
Weishan: Yes. We are currently both in the Internal Medicine Residency Programme under the National Healthcare Group so we frequently shuttle between Tan Tock Seng Hospital and Khoo Teck Phuat Hospital.

What has been the most challenging thing you’ve had to face as a couple?
Weishan: We could spend lots of time together when we were students but that had to change when we started work. We had varying work schedules due to different shifts. It was tough but we decided to make a conscious effort to take time out to catch up with each other about our day. It helped that we are both in the same in line of work, so we are understanding of last-minute changes to our schedules.