Even though alumnus Jin Ge (EMBA/2013) faced intense mental pressure and uncertainty when he was diagnosed with Ankylosing Spondylitis (AS), a rare form of spinal arthritis, in 2015, his life took a turn for the better after he followed his doctor’s advice to start running. He began to run in 2016 and gradually became an enthusiast, participating in many marathons and cross-country races.

Since the second half of 2018, Jin Ge has run every day. “As a foodie, running is an effective method to help me lose weight without being too restrained in my diet,” said the 40-year-old, who weighed 85kg before he started running. “It also reduces the pain in my joints and keeps them active.” To date, Jin Ge has run more than 20,000km and he now weighs below 65kg. In late May 2021, he participated in the annual Gobi Desert Challenge with fellow NTU EMBA (China) programme alumni, running 120km in 16 hours, finishing 10th in the men’s field out of 150 others. This was a stark improvement as compared to the challenge in 2017, where he completed the run in four days.

Feeling compelled to spread awareness about Ankylosing Spondylitis (AS) and inspire fellow AS patients, Jin Ge embarked on a ‘Journey to the West’ charity run from 6 June to 27 September 2021, from Beijing to Lhasa. He completed the run in 114 days and ran a total of 3,964.35km.

Despite the challenges faced during his journey, not least enduring considerable pain from intense, long-distance running, Jin Ge remained resolute in his determination and did not falter. “When you have a goal, especially when the goal is not just for your own benefit, any difficulty will appear insignificant,” he said. 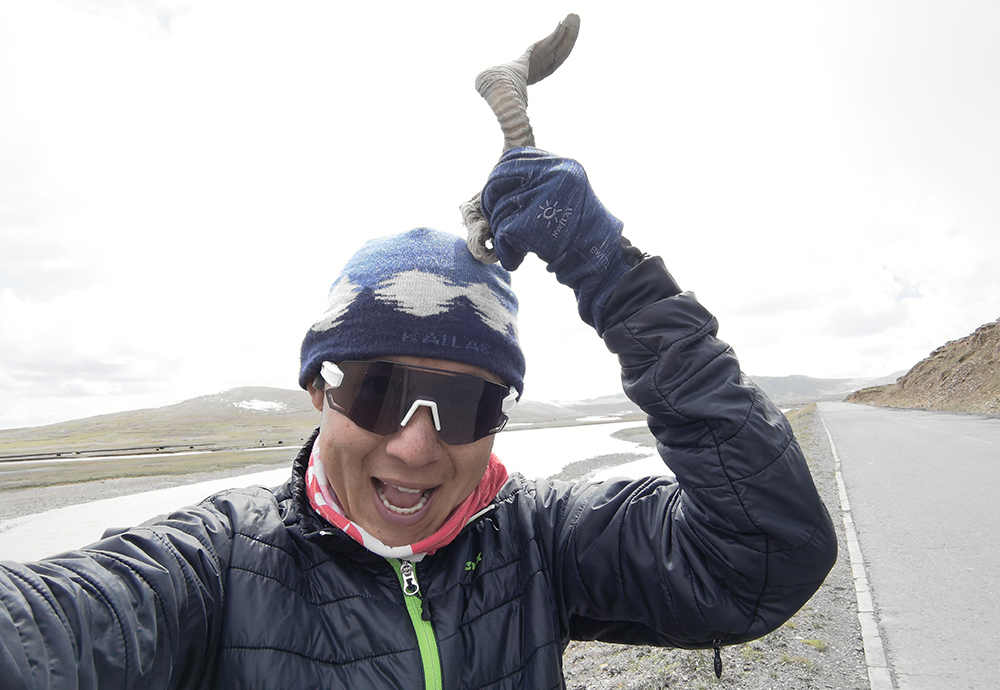 Jin Ge posing with a Tibetan gazelle antler that he found along his path. Credits: Jin Ge

During his journey, Jin Ge met many medical workers and fellow AS patients on the road. “There were also others who accompanied me as I ran, which was very heartwarming,” said Jin Ge, who passed through a long list of Chinese cities: Baoding, Shijiazhuang, Taiyuan, Yan'an, Lanzhou, Xining, Delingha, Golmud and Lhasa.“ The route I chose to run passes through many famous places of interest. The breath-taking sceneries and encounters with new friends, cultures and food had made this experience so incredible for me.”

Tibet’s Potala Palace in all of its glory. Credits: Jin Ge

Jin Ge’s decision to embark on this journey was initially met with shock and scepticism from his family, who were neither able to comprehend nor support it. “I had expected them to react this way. Hence, I only decided to tell my family and friends two days before I departed for my journey,” he said. “But as they saw how I travelled farther and farther away from my starting point, they began to understand that they were unable to change my decision. As they were also touched by my determination, I gradually earned their support.” 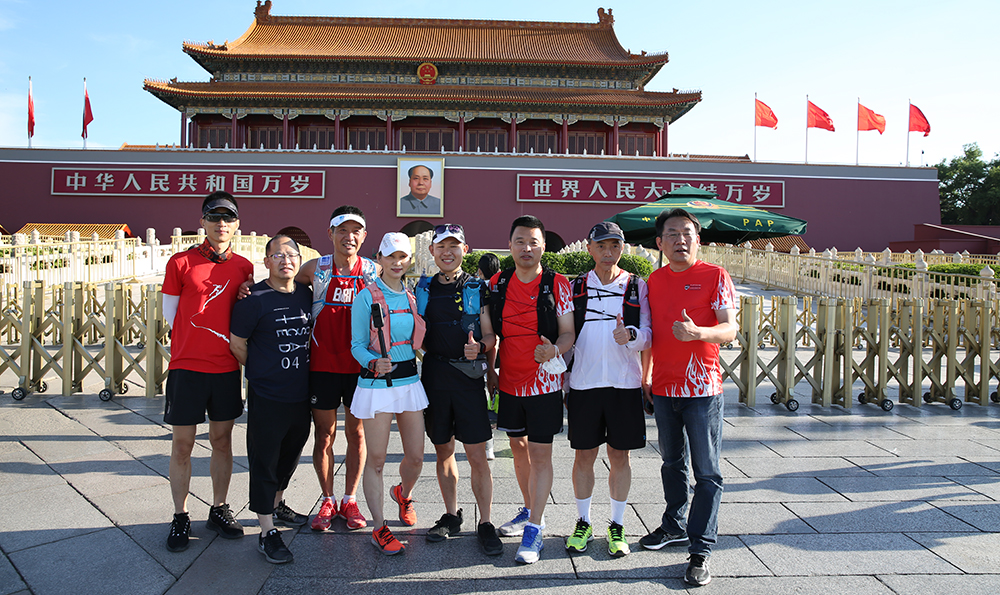 Thumbs up for the brave effort! Jin Ge (5th from left) with fellow NTU alumni and friends at Tiananmen Square. Credits: Jin Ge

Jin Ge encourages fellow AS patients to heed the doctor’s advice of starting suitable low-impact workouts, such as jogging, cycling, swimming, to alleviate this incurable chronic disease. While Jin Ge takes a break from his running, his efforts to raise awareness for AS have not stopped. “I have created various Weixin groups that encourage my friends and AS patients to persevere in their exercise routine and share information and knowledge of ankylosing spondylitis,” he said. 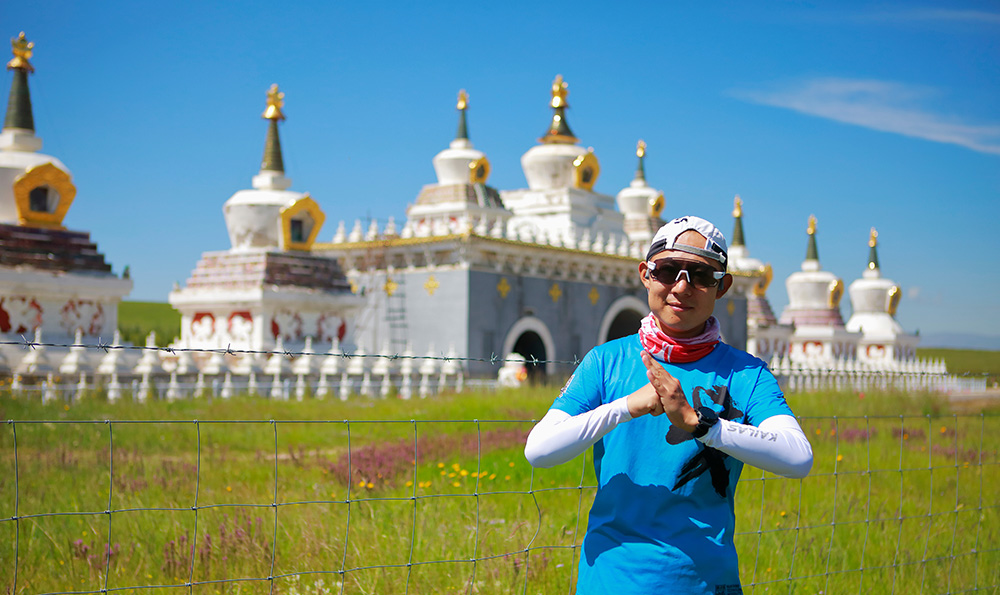 Greetings from Qinghai, where the weather is perfect with clear blue skies. Credits: Jin Ge 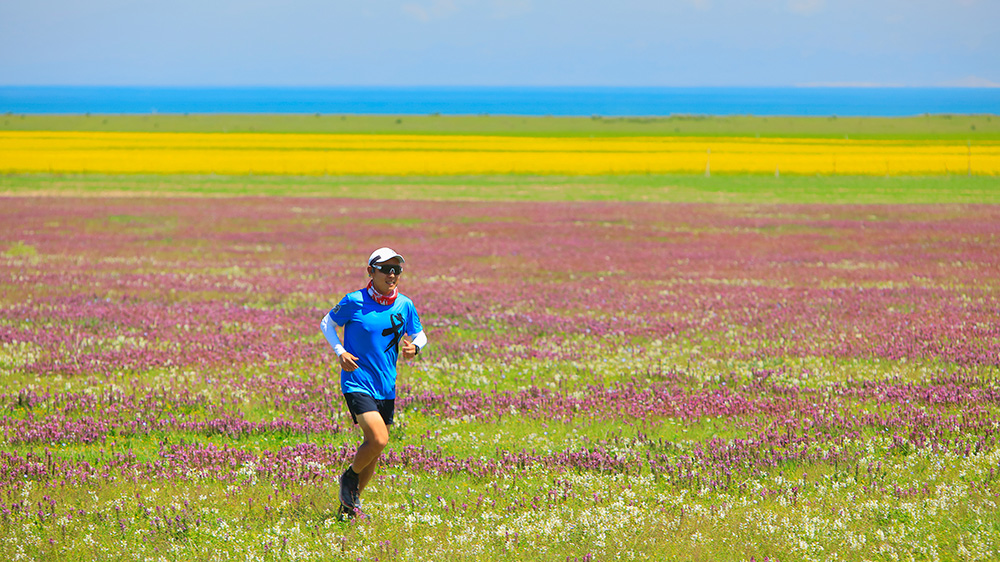 Running through a vast grassland in full bloom with Qinghai Lake in the horizon. Credits: Jin Ge