In September 2021, NTU marked its 30th anniversary, celebrating its 30 years of momentum with the launch of a digital time capsule. The first artefact that went into the time capsule was a video letter from Education Minister Chan Chun Sing addressed to the Class of 2041. The capsule will be opened at NTU’s Golden Jubilee in 2041. In his letter, Mr Chan envisages what education will be like in the future. The OneNTU community was invited to contribute their significant moments or souvenirs that would serve as an inspiration to future generations of NTU students. Almost 140 entries were submitted ranging from class memories and representations of life amid the COVID-19 pandemic to inventions and milestone moments of NTU’s history. 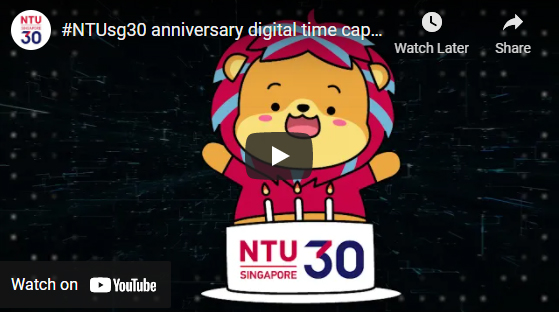 Thirty items were selected from the submissions to be deposited and sealed in the memory bank. The artefacts are shown at the “Thirty Years of Momentum: 30 Perspectives” anniversary public exhibition held at the Nanyang Auditorium Foyer, on Mondays to Fridays (9am to 8.30pm), Saturdays (9am to 6.30pm). Closed on Sundays and Public Holidays. View the virtual exhibition here.