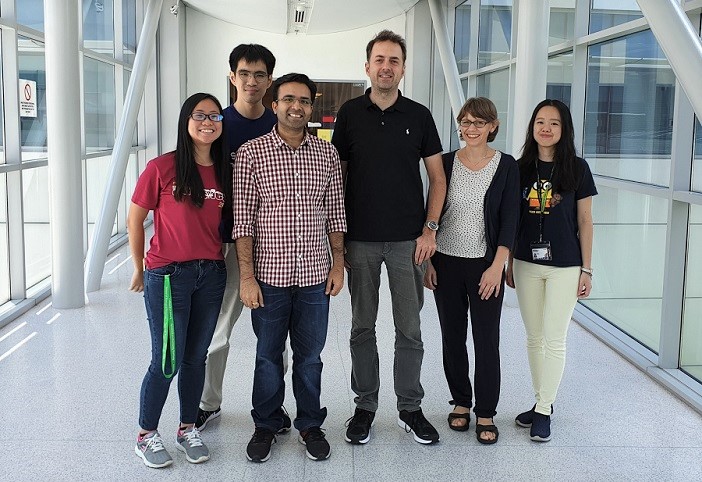 We use systems biology to elucidate the function of genes in the plant kingdom. Today, knowledge of gene function is mostly confined to Arabidopsis thaliana, the main model organism in plant research, which limits our understanding of the plant kingdom. To remedy this, we are characterising also other plant species in terms of genomics, gene expression, metabolomics and protein-protein interaction networks. Based on this biological data we can then predict gene function with state-of-the-art network ensemble methods and other dry-lab techniques. This knowledge is important to understand plants and to tailor them to our needs.

​​​​​Elucidating Protein-protein Interaction Networks in Lower Plants
A physical interaction of proteins is one of the most reliable indications that they belong to the same biological pathway. In this project we employ a novel approach to obtain near genome-wide protein-protein interaction networks which is based on a massively multiplexed assay that combines a modified yeast-two-hybrid approach with next-generation sequencing (CrY2H-seq). The interaction networks will be mined for groups of interconnected enzyme clusters (gene modules). We currently focus on an early land plant model, Marchantia polymorpha, but we will expand the method to cover model plants representing the whole plant kingdom.

​​​​Towards Revealing Biosynthesis of Anti-tumor Metabolites in Hedyotis species
Plants have been used for thousands of years for their anti-tumor effects. For example, Hedyotis diffusa is widely used for colon and breast cancer treatment in TCM. We aim to assemble the Hedyotis genome to understand the genetic basis of the metabolic complexity of the plant. We will then use a systems biology approach to elucidate the biosynthetic gene modules for candidate anti- anti-tumor metabolites.

​​​​A Systems Biology Study of Heat Stress Acclimation in Plants
Crop loss due to rising temperatures is a major and upcoming challenge. We will study the ability of plants to be primed for future stress when previously exposed to sub-lethal conditions using the model grass plant Brachypodium dystachyon. We will investigate several regulatory layers known to play a role in heat stress acclimation, including modifications on the epigenetic, transcriptional, post-transcriptional, translational, post-translational and metabolomic level. Gene function prediction for stress-related traits is a prerequisite to efficiently engineer plants for stable food production in a changing climate.

​​​Malaria-tools: Comparative Genomic and Transcriptomic Database for six Plasmodium Species
Malaria is a tropical parasitic disease caused by the Plasmodium genus. Despite the availability of the Plasmodium falciparum genome, almost 50% of the genes remain unannotated. These unannotated genes are often specific to the parasite and share little sequence homology to genes from other species. The availability of transcriptomic data allows us to build gene co-expression networks, where genes with similar expression profiles across different samples are connected. Often, these connected genes perform a similar function, and thus, these networks are powerful tools to predict gene function. Our aim is to produce and analyse such networks for Plasmodium species to allow malaria researchers to rapidly identify and study genes important for pathogenicity.

​​​Identifying Biosynthetic Pathways of High-value Compounds
Plants contain more than 200,000 secondary metabolites that are useful in a wide range of industrial contexts, however, many of the genes coding for their biosynthesis are unknown. Genes encoding biological pathways can be elucidated e.g. with transcriptomic data, chromosomal proximity information or protein-protein interaction networks. In this project we are using machine learning and ensemble gene function prediction approaches to generate a database for predictions that reveal the identity and spatio-temporal expression of biosynthetic modules of secondary metabolites in plants. Elucidation of the biosynthetic genes will provide a valuable resource for mass-producing these compounds with synthetic biology approaches.

​​​Towards Phyto-antibiotics: Identification of Plants with Antibacterial Activities
One of the most serious problems in public health is the growing number of antibiotic resistances, such as methicillin-resistant Staphylococcus aureus (MRSA). The aim of the project is to mine the flora of Singapore for novel candidate antibiotics and to elucidate the genes that are producing these metabolites. The applied gene function prediction methods rely heavily on extensive data collection through genome sequencing and assembly, transcriptomics, metabolomics, protein-protein interaction, and anti-bacterial activity assays. Using this biological data, we will be able to identify functionally related genes, thus revealing modules of genes that work together in the same metabolic pathway. This genetic information will then be linked to the presence of metabolites and antibacterial activities.

​​​Comparative Expression Database of Diurnal Gene Expression in the Plant Kingdom
The circadian clock genes allow plants to temporally coordinate many aspects of their biology with the diurnal cycle, where groups of functionally related genes are expressed at a specific time of the day. Comparative analysis of expression data from multiple species can elucidate the similarities and differences of the diurnal expression of gene modules. We used gene expression data from 17 diurnal studies spanning the whole Archaeplastida kingdom to generate a diurnal database. The tools in the database serve to perform several cross-species comparisons, such as gene expression profiles, co-expression networks, co-expressed clusters involved in specific biological processes and time-specific gene expression.

​​Expression Atlas of Selaginella moellendorffii, a Model for Early Vascular Plants
The plant vasculature, analogously to the human vascular system, allows plants to transport water and nutrients to the distant organs. Vasculature is absent in early land plants, such as mosses, but appeared in the lycophyte lineage, around 400 million years ago. To understand the molecular basis for vasculature formation, we are generating a​n expression atlas and co-expression network for a model lycophyte, Selaginella moellendorfii. By comparing its co-expression network to the moss Physcomitrella patens (no vasculature) and flowering plant Arabidopsis thaliana (vasculature) we aim to identify the regulatory circuits responsible for vasculature formation.
Full list of publications can be found here