We were honoured to have three Nobel Laureates of Physics and a Fields Medalist who attended this special conference. They were appointed as Lee Kong Chian Distinguished Professors in relation to the conference. This memorial event was a tribute to Robert Brout who would have been 90 in 2018. Unfortunately he passed away just a few years before the Nobel Prize was awarded to his long-time collaborator François Englert with whom he shared so many research results.

Professor François Englert is Professor Emeritus at the Universite libre de Bruxelles where he is member of the Service de Physique Theorique. He won the 2013 Nobel Prize for Physics with Peter Higgs for the discovery of the Higgs particle. 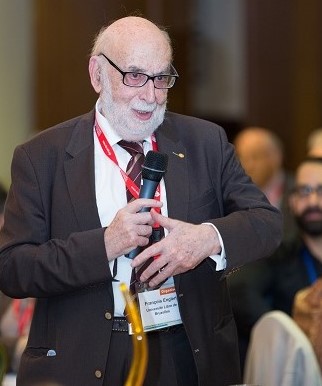 Professor Duncan Haldane is the Eugene Higgins Professor of Physics at Princeton University. Along with David Thouless and John Michael Kosterlitz, he was awarded the 2016 Nobel Prize in Physics for theoretical discoveries of topological phase transitions and topological phases of matter. 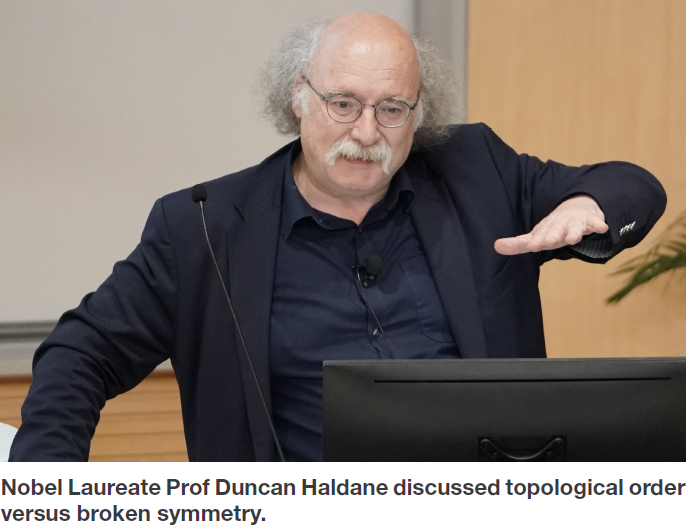 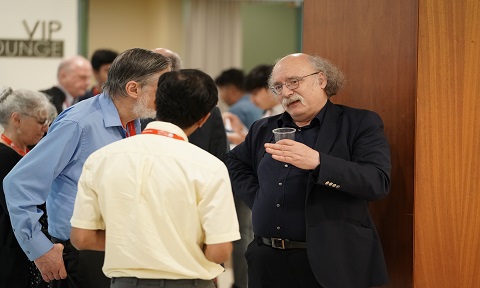 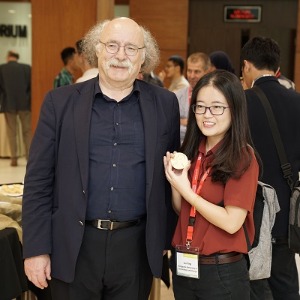 Professor Gerard 't Hooft shared the 1999 Nobel Prize in Physics with Martinus Veltman for elucidating the quantum structure of electroweak interactions. He was knighted commander in the Order of the Netherlands Lion, and officer in the French Legion of Honor. 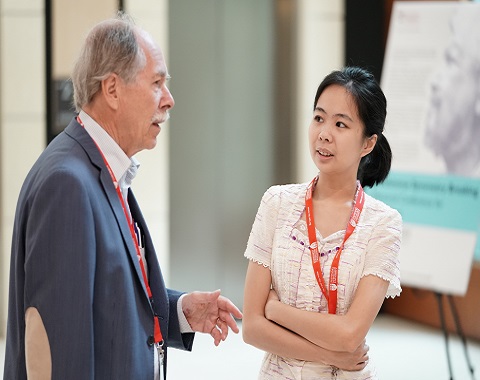 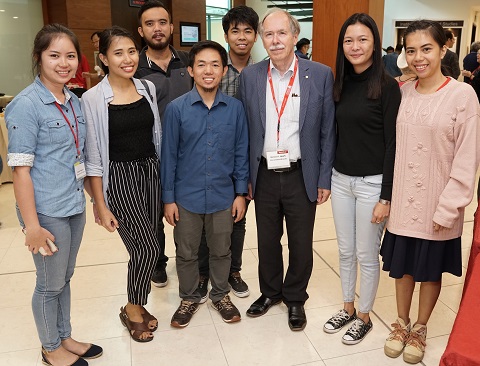 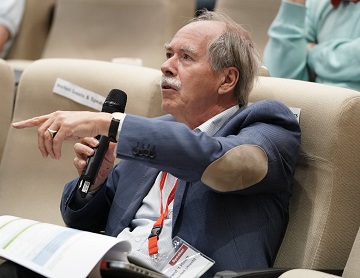 Professor Michael Atiyah was awarded the Fields Medal in 1966 for his work in topology. He is one of the foremost mathematicians of the 21th century. He was involved in the creation of the Isaac Newton Institute for Mathematical Sciences and was its first director from 1990 to 1996. 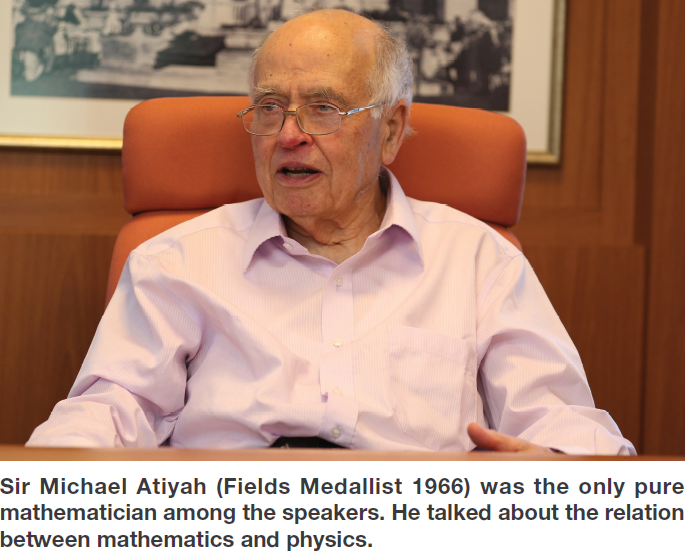 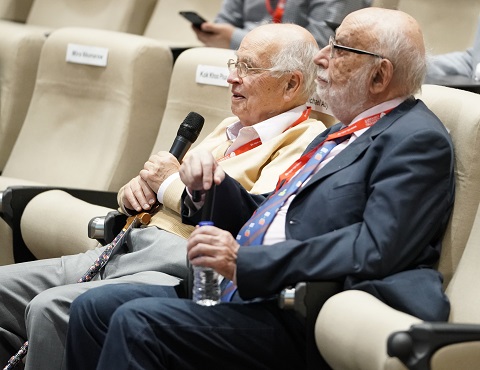 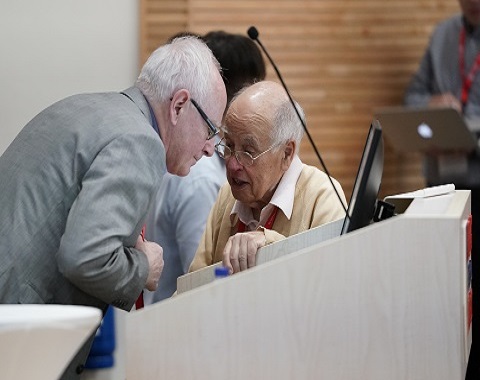 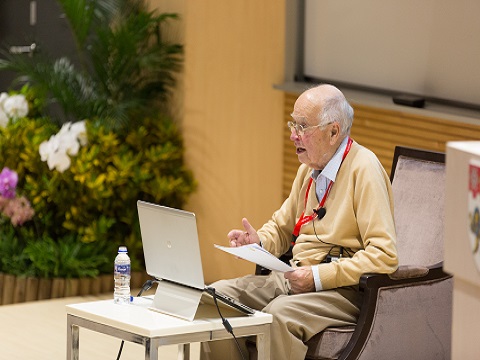 Nobel Laureate Professor Frank Wilczek was the co-chair and speaker of the centennial conference and he was appointed as Lee Kong Chian Distinguished Professor in relation to the event. The Centennial Conference featured eminent scientists who spoke about Feynman's contributions in many areas of physics and beyond, and also discussed where the fields are today. Professor Richard Feynman was one of the most influential scientists of the last century. His Feynman diagrams' to compute scattering amplitudes revolutionised the field of elementary particle physics. 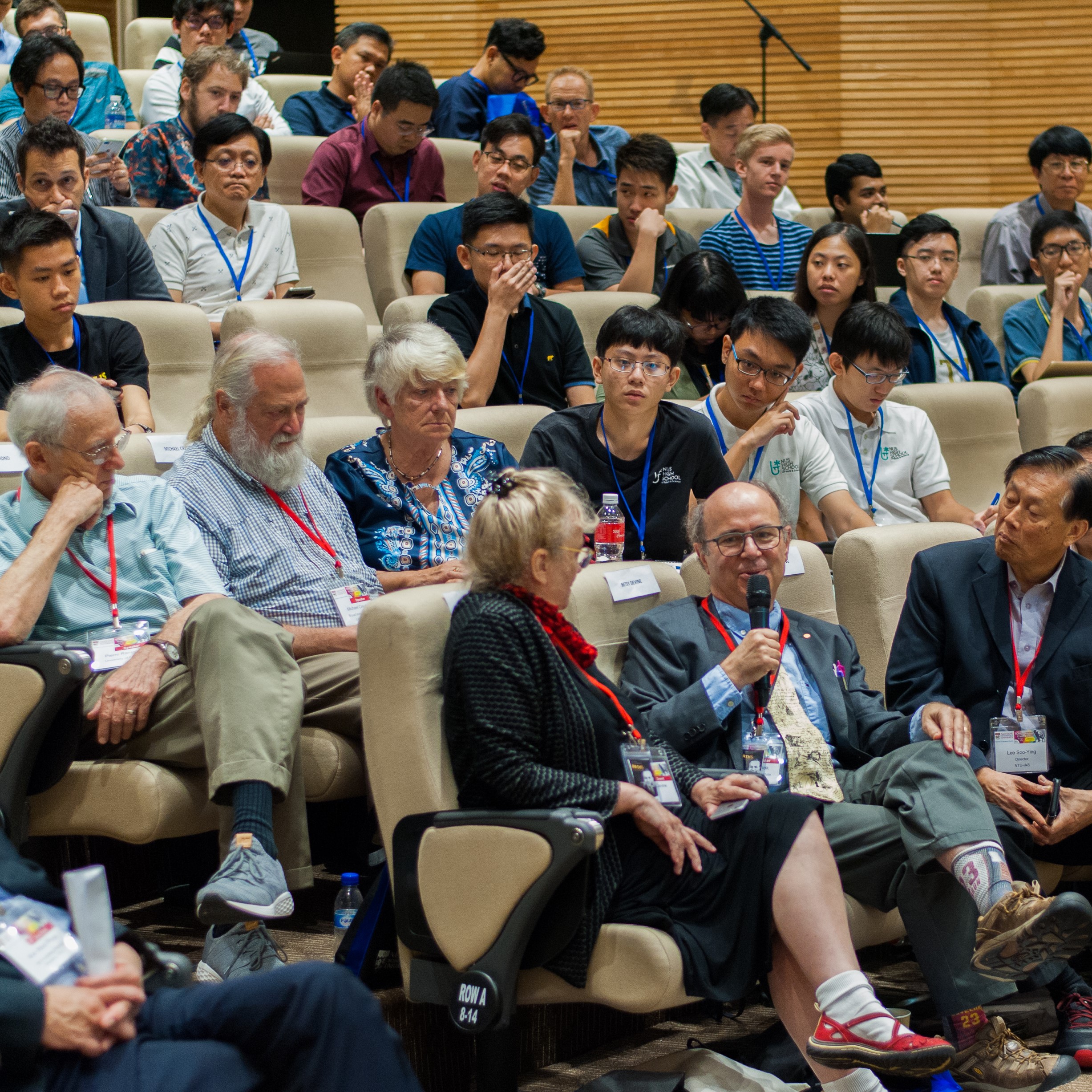 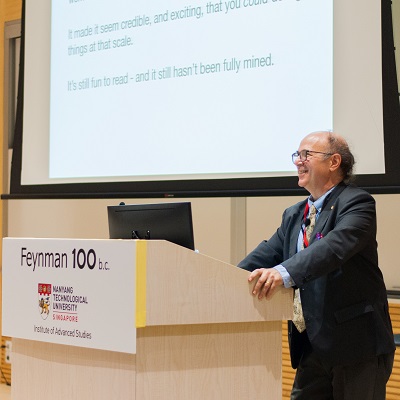 Professor Wilczek received the 2004 Nobel Prize in Physics along with David Gross and David Politzer, for their discovery of asymptotic freedom in the theory of the strong interaction. He is the Herman Feshbach professor of physics at MIT; Founding Director of the Tsung-Dao Lee Institute and Chief Scientist at Wilczek Quantum Center, Shanghai Jiao Tong University; Distinguished Origins Professor at Arizona State University; and Professor at Stockholm University.

The conference audience included many students who were inspired by the importance and relevance of Feynman’s work that is still applicable to modern scientists.

Among the workshop speakers were two Nobel Prize winners, Professor Rudolph Marcus and Professor John Walker. They were appointed as Lee Kong Chian Distinguished Professors in relation to the workshop. The event focused on molecular mechanisms which underpin the energy cycle; the photosynthetic reaction responsible for splitting of water to produce of oxygen and its reduction by respiration to release energy in the form of ATP. Professor Rudolph Marcus received the Nobel Prize for Chemistry in 1992 for advancing the theory of electron-transfer reactions in chemical systems. The Marcus theory revealed information on such common phenomenon as photosynthesis and corrosion.

Professor Sir John Ernest Walker won the Nobel Prize in Chemistry in 1997 with Paul Boyer for their elucidation of the enzymatic mechanism underlying the synthesis of adenosine triphosphate. They also shared the prize with Danish chemist Jens Skou for the discovery of ion-transporting enzyme, Na+, K+ -ATPase. 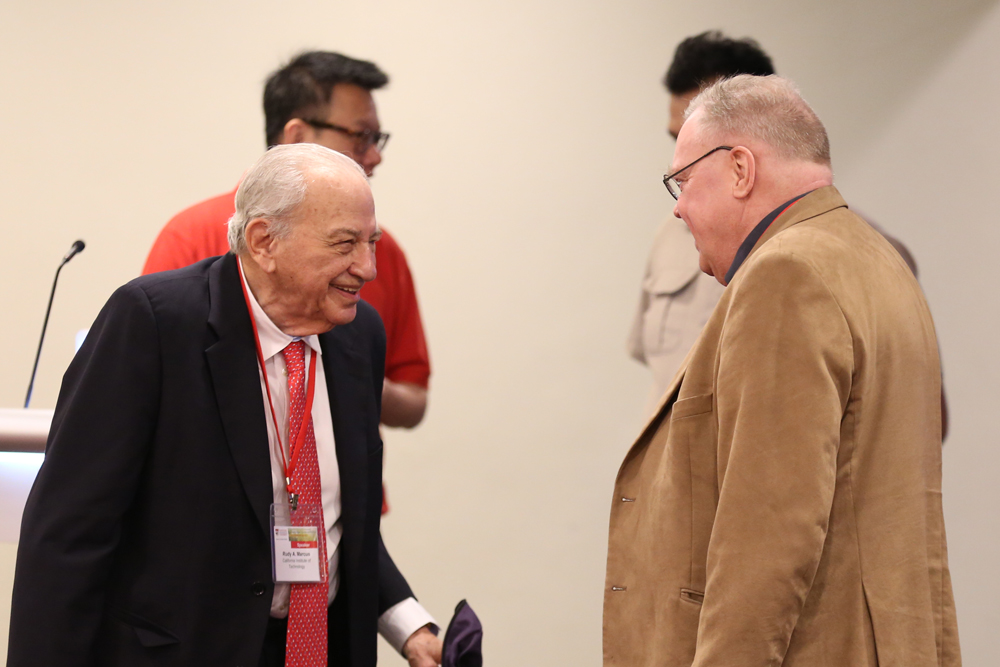 Nobel Laureate Professor George Smoot was the plenary speaker of the Transient Universe Conference.  He also delivered an interesting public lecture on gravitational waves held at the Science Centre Singapore. He won the 2006 Nobel Prize in Physics for his work on the Cosmic Background Explorer with John Mather that led to the discovery of the black body form and anisotropy of the cosmic microwave background radiation. 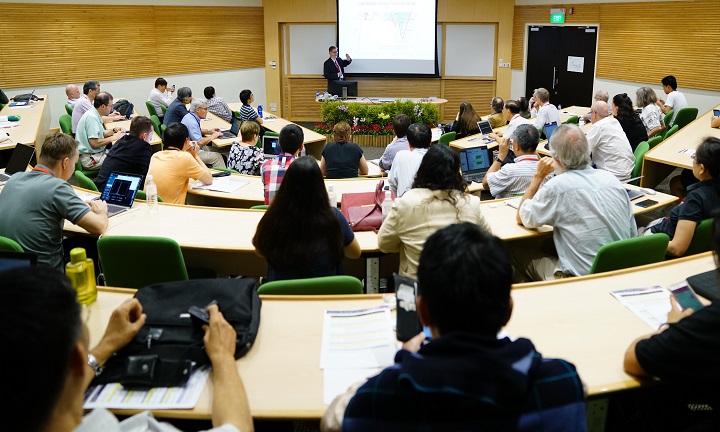 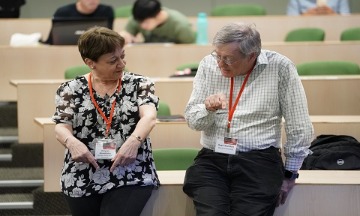 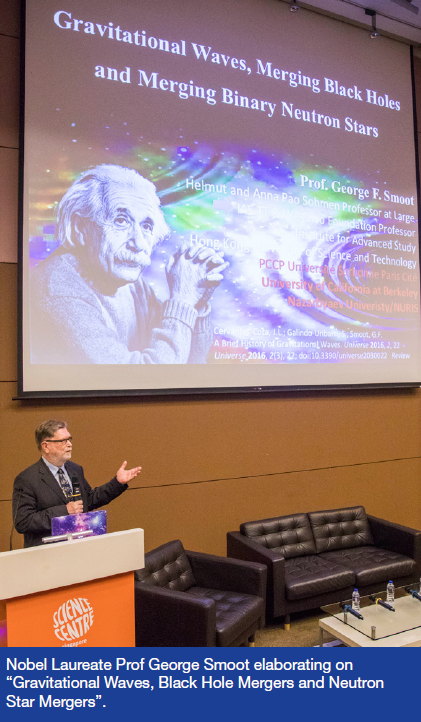 Nobel Laureate Professor Rudolph Marcus was the plenary speaker of the workshop which covered fundamental and applied aspects of polyelectrolyte systems including all highly charged synthetic and biological polymers and aggregates formed from surfactants in aqueous medium. Prof Marcus was appointed as Lee Kong Chian Distinguished Professor in relation to the workshop.  He received the Nobel Prize for Chemistry in 1992 for advancing the theory of electron-transfer reactions in chemical systems. 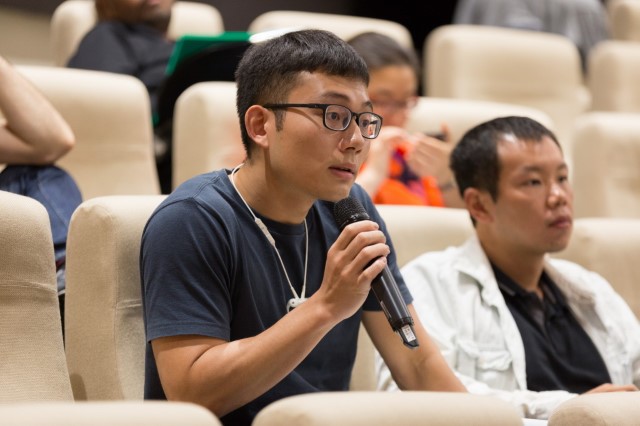 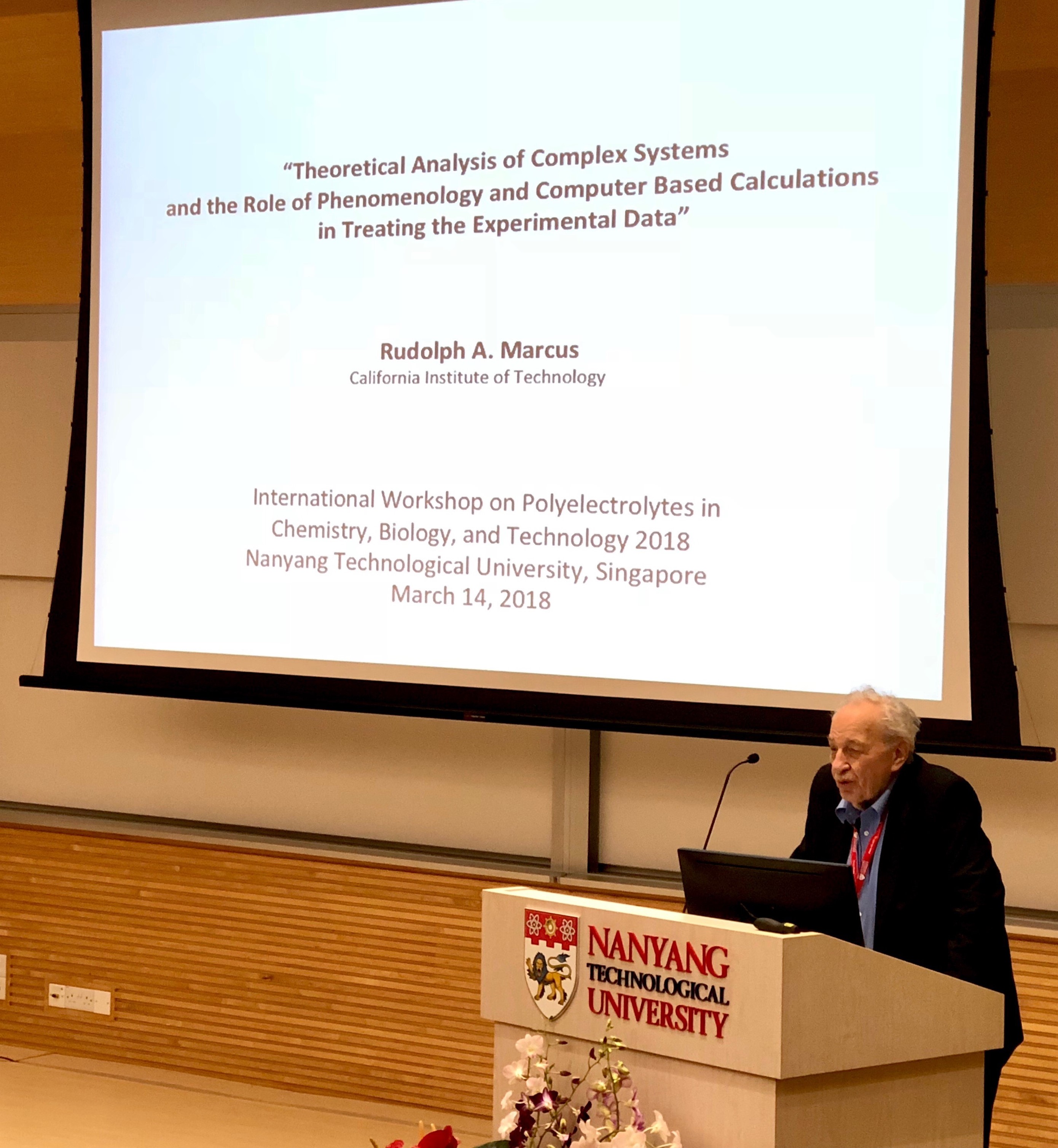