Screenshot from the ASE Freshman Orientation 2021, which took place online.

A soft flurry of voices erupts into a boisterous babble of laughter. A cacophony of colours flutters both in front of and behind us; these are our self-designed Zoom backgrounds. Unabashedly we hold it above our heads, all the time and for all to see, because our pride lies in that banner; it is our singular sign that no one can mess around with our OG. (Also, out of nowhere, a jumping potato with strong resemblance to the Annoying Orange kept flitting in and out of the frame. It still strikes me as absurd, so I had a long debate whether to include it here, but finally I have decided I must be truthful, and so I have.)

These were only snippets of ASE’s virtual Transition Orientation Programme (TOP, themed DAISYWORLD), conducted from 3 August to 6 August 2021. Set in a dystopian landscape where the earth-like Daisyworld had already been 60% destroyed by evil scientists, freshmen raced to complete the mission of preventing Daisyworld from being further destroyed. Through the great variety of games, university talks and seniors’ sharings, freshmen had a taste of the new life awaiting them in ASE. With such inter-level and inter-generational bonding of the student body and faculty, TOP is undoubtedly one of the best displays of the ASE spirit.

This was the first day of TOP. It felt like I was in ASE for the first time; like I was in Year 1 all over again. As Group Leaders we had already gone through two rounds of dry run, but still, as new faces popped up on my laptop screen, memories of my first virtual ASE orientation came flooding back. All too familiar were the worries, the panic, the visceral fear of the very word ‘Orientation’... Then as chatter and gentle music filled the air, these bittersweet memories faded away, replaced by an eager anticipation for the activities of the day.

Phoebe, the Director of the TOP committee, gave a welcome talk and introduced the entire committee: the Welfare team, the Publicity team, the Programmers and the Group Leaders. After the introductions, we listened to a curriculum talk by Dr. Natasha Bhatia, a talk on Academic Honesty with Dr. Shawn Lum and a Code of Conduct Talk.

After the talks ended, it was finally time for everyone to meet our orientation groups. Little did we know that even this was not going to be easy: freshmen had to get through Farm Animals, an ‘animal herding’ game to identify fellow group mates. One person from each group was in charge of ‘herding’ a specific animal based on the sounds and calls that the rest of the group mates were making. Watching the freshmen speak on top of one another, and seeing the Zoom call devolve into absurdity and chaos, I grappled between the conflicting feelings of sympathy and amusement. To quote a freshman: “My mother is judging me.”

Screenshots of some of the orientation groups.

After more icebreakers, freshmen attended a Freshman Welcome Ceremony. They were reminded of the vast support network present in NTU as well as the myriad of non-academic activities they can participate in.

“Flow” is a challenging memory game where teams had to memorise the specific route to cross from one end of the river to the other. Even though I had played this before, I still struggled to keep track of the route each time.

In “Song of the Bird”, bird calls of seven birds were first played for freshmen, then they each imitated a given bird’s call and the others had to guess the bird. I could sit back and relax as my fellow group leader, a longtime Nature Guide, presented. There Cheryl goes again, describing the distinction between a bird’s screech and squelch. “This one sounds like a coppersmith tapping metal”, she said breezily of the coppersmith barbet.

The day began with a Safety talk, covering essential information from the various emergency evacuation routes around ASE to the ways of handling equipment. Next we had an officer from NTU Career and Attachment Office (CAO) sharing a Career talk (a highlight of which was that there would now be compulsory internships for all ASE freshmen) and officers from the NTU Office of Global Education and Mobility (OGEM) sharing about GEM Explorer and GEM Discoverer, which are NTU’s versions of exchange programmes.

After lunch, the freshmen watched a video of how the Student Automated Registration System (STARS) works, then keyed in questions into menti.com which seniors answered. I still remember the first time I heard about this on my first ASE orientation, feeling utterly lost and hoping that everyone else could ask some questions because I was too confused to think of one myself.

During the OG time period, we played a Spotify Guess-whose-favourite-song game. Everyone chose a song that they liked and sent it to me, and then I played the song. While playing it, everyone had to lip-sync to the lyrics of the song, and from there we guessed who seemed to know the song the best. It was exciting guessing everyone’s song vibes, and fascinating to find out that Cheryl draws energy from listening to the same song every morning.

Besides this, we also played Taboo, where each individual is given a word that only their friends know. Then we initiate a ‘normal’ conversation to try to make our friends say the Taboo word, while simultaneously being careful that we don’t fall for another’s trap. Now a normal, benign conversation had become a dangerous, ruthless competition: who could walk on eggshells best? As creative and awkward descriptions of common things trickled through, our dialogue teetered between tension and laughter.

Later we played escape room on Gather Town, a platform where one can customise places such as office workspaces and dining rooms. Now we said hello again not just to our new friends but also to our new selves! In this space we became same-sized icons dancing; same-speed icons rolling across the room like bowling pins. While it was somewhat cute watching ourselves scuttle across the room and hunting for clues like little mice, nonetheless, in a symmetrical place nailed down to geometric precision, I must admit I also developed new annoyances. Like, how a friend standing close by was now an inconvenience; a hindrance in my path. (I shall not reveal names for the sake of my security.)

To escape, five puzzles involving riddles, images and even a mathematical problem had to be solved. There was a puzzle for each specialisation within ASE, where freshmen identified: the tools that geologists use in the field (Geoscience), a platypus (Ecology) and the Sustainable Development Goals (SDGs) (Society).

We had come to the third day of TOP. For OG time this round, my OG combined with another OG. We played the same Spotify guessing song game, this time a little wilder, and then it was time for Seniors’ Casual Sharings. Arranged in the form of a panel discussion, the topics covered spanned Year 1 courses, the various specialisations, lab research, field trips and hall life and/or co-curricular activities (CCAs).

Isha and I shared passionately about our CCA, Earthlink. We briefly covered Earthlink’s initiatives and events, as well as the commitment level and how we strike a balance with academic work. Additional tips by other seniors also frequently popped up in the Zoom chat. My batchmate Celine also created a group chat for ESPP seniors and juniors to facilitate questions related to our second major.

Subsequently, we embarked on a virtual school tour in ASE Explorer. After a quick overview of the general route, we launched an interactive game where they had to choose the direction of the route. While I feigned nonchalance I was secretly shocked at how my OG could remember the routes so well; I remember my memory blanking last year, ending up being entirely useless and relying on my OG mates to do the decision-making.

Another highlight of the day was Un-masquerade, a Kahoot game where freshmen had to identify seniors wearing masks. There were different levels of difficulty, and after each round Phoebe would give additional tips as to how else these seniors could be identified.

Finally, each OG came up with cheers. My OG took reference from a common cheer, and Izzah suggested some hand actions to accompany them. In the end, we split up the cheer into one line per person. Eventually OG9 clinched the Popular vote.

It was the last day of Orientation. In the late morning we gathered at Gather Town again for a new set of games. There were five altogether; different OGs were assigned different orders of games.

The games ranged from straightforward ones, like carefully following instructions, to mentally stimulating ones, like riddles. In the first game, someone was assigned to be the leader, while the other participants were followers who had to close their eyes and follow the instructions given by the leader. The leader gave movement directions to each person and the team that moved the furthest from the starting point would win the game.

In the second game, a riddle, we had to figure out which coordinates of the monster by solving clues together. Then there was the “Five Seconds Rule” game, where we each took turns to name three random things within five seconds. Finally, in the last game we counted the total number of ducks in different rooms and the outdoor gardens, as well as uncode a message from the letters embedded in some of them: TYProggies!

In the afternoon, we played Catch-the-King, a seniors-vs-juniors game on Gather Town. However, the game flopped and we ended up rather confused, so we changed the rules of the game instead, where the juniors asked seniors simple yes/no questions to single out the king. Then Yi Jin and a few other people created a dance related to Justin Bieber’s Eenie Meenie Miney Mo Lover song that we all danced along to.Following that, we concluded with our annual BBQ session. The setting was warm; there was a beach area with a Bali 22 sign. After a Kahoot session, we watched the Orientation video created by the Publicity team then gathered in small groups in Gather Town to speak with our ASE professors. We also played this Jackbox game; one of the games was about answering a writing prompt and the answer that collected the most votes won.

Regrettably, I couldn’t be present for the goodbye as I had a stomachache. Thank you, Proggies, Pubs, Welfare and Group Leaders for putting Orientation together; the online experience was definitely optimised for the best experience that it could have ever been! See you at next year’s TOP, and hopefully in-person :) 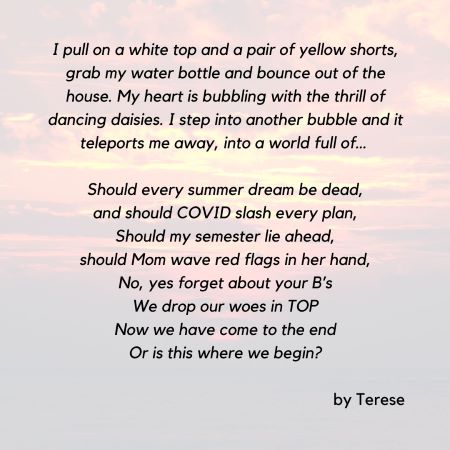 Four Nanyang Awards to ASE, for excellence in service, research and teaching