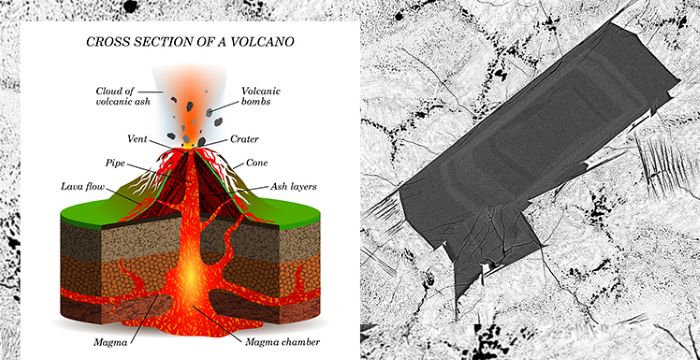 Volcanic eruptions are notoriously hard to anticipate and being able to accurately forecast eruptions is something of a ‘holy grail’ of volcanology. The societal hazards that volcanoes represent are undeniable; recent examples include Taal Volcano in the Philippines January 2020, Whakaari/White Island in New Zealand's 2019, Anak Krakatau, Indonesia, 2018 and Agung in Bali, Indonesia, 2017. Time scales of volcanic processes leading up to an eruption is an obvious key part of the puzzle, and this is the special interest of ASE Assoc Prof and EOS Interim Director Fidel Costa. As a volcanologist, he studies magmatic processes and rocks from active volcanoes with the goal of better understanding and forecasting of volcanic eruptions. In a recent article in Nature Reviews Earth and Environment, he outlines the technique of diffusion chronometry, where volcanic crystals are used as time capsules that, for those who know how to read them, can reveal the time scale of underground magmatic processes of a volcano.

Volcanic eruptions are always preceded by activity in the magma ‘plumbing system’ underlying the volcano; magma is mobilized from underground storage reservoirs, through conduit ‘pipes’ before ascending into the erupting volcano. Volcanic crystals form in the magma as it moves from the depths of the earth, and as they ascend the volcano they respond and change to their environment, creating a record of the magma ascent in its composition. The time ‘recorded’ varies from days to years in mafic volcanoes (with relatively fast flowing magma), up to millennia in volcanoes with more viscous plumbing systems, and they match data on seismic activity.

Diffusion chronometry builds on the process of chemical diffusion, which applies to a range of different natural systems such as tea from a tea bag diffusing into the hot water, carbon dioxide diffusing from your soda when you leave the lid off the bottle, pollution diffusing in the air, or oxygen diffusing from the air in your lungs into your blood. Diffusion of elements and molecules also occurs in volcanic crystals. Diffusion in these crystals, like all diffusion, is driven by a chemical gradient between the material in question and an adjacent medium, like magma, and strives towards an equilibrium state where no chemical gradient exists. For example, a crystal made out of the mineral olivine contains the element magnesium. The magma surrounding the crystal at any one time will form a rim around the crystal, reflecting the Mg content of that magma, which is different to the Mg content of the core of the crystal and also to the magma in the next step of the ascent under the volcano. Over time the Mg content of different layers of the crystal will even out through diffusion, but if the diffusion coefficient of Mg is known, the time since the crystal experienced different types of surrounding magma can be calculated. From that that a time scale of magmatic processes can be created.

Recent advances in the theory of diffusion of key elements in volcanic minerals means that diffusion chronometry now can be used to study volcanic processes and contribute critical information on timing for improved forecasting of volcanic eruptions and prevention of these natural hazards from turning into disasters for human societies.

Read only copy of the original article: Diffusion chronometry and the timescales of magmatic processes