The inaugural We Belong campaign, held in early 2022 in celebration of NTU’s 30th anniversary, was a resounding success. Aimed at encouraging students, faculty, staff and alumni to give back to the community through volunteerism and fundraising, it drew more than 4,000 donors and volunteers and exceeded its $1 million fundraising goal. The OneNTU community partnered with community organisations during the NTU Service Week in January and reached out to the needy in Singapore as well as overseas, including China, Kenya and the ASEAN region. They contributed more than 3,300 volunteer hours in a variety of ways, such as by providing telehealth services, and through food distribution and the donation of pre-loved laptops. 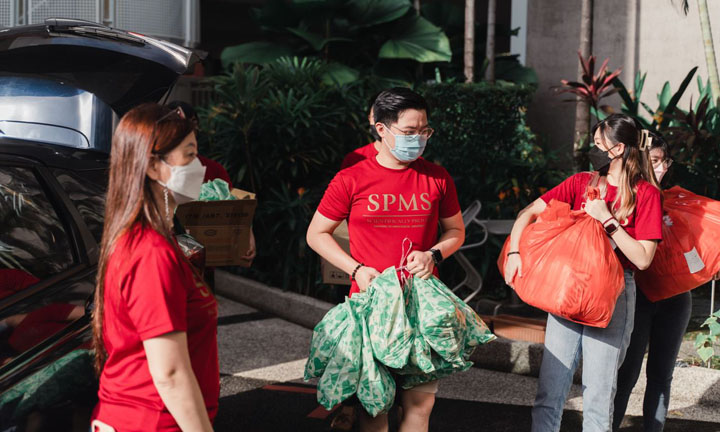 The Best Foot Forward fundraising virtual run in February raised over $200,000 across six weeks. NTU NIE Alumni Association President Bernard Tung clocked a record 900km to top the leaderboard for individuals. WKWSCI alumni Eric Chua (Senior Parliamentary Secretary of Ministry of Culture, Community and Youth and Ministry of Social and Family Development) made a donation appeal on Facebook that amassed close to $12,000 for the Best Foot Forward segment – the highest amount raised by an individual. Among the 84 teams who participated in the event, the Nanyang Business School pulled in close to $44,500 while the University Advancement Office (UAO) chalked up almost 2,000km.

The 12-hour Giving Day hybrid fundraising drive was the culmination of the inaugural We Belong campaign. Most of the donations supported the NTU Bursary Fund, followed by the School Advancement Funds, NTU Priorities Fund and NTU Sustainability Fund.

"The NTU We Belong campaign has been all about participation and togetherness. The OneNTU community has shown its pride in the University, and helped to advance the remarkable work being done by our students, alumni, faculty and staff in Singapore and beyong." - Ms Lien Siaou-Sze, Vice President for University Advancement

See how the community chipped in during NTU Serive Week here.

Click here to keep updated on the We Belong campaign in 2023.

This article first appeared in issue 2 of U, the NTU alumni magazine.