What does the founder and CEO of an R&D lab, one of the youngest CEOs of a listed company in Malaysia, and a Paralympic archer have in common? Not only do they share an abundance of self-resilience, but they were also backed by the strong support of members of the OneNTU community who helped them get to where they are today. 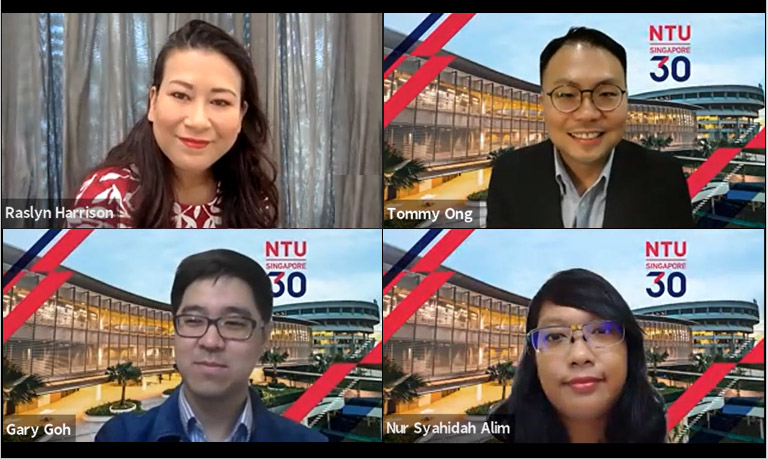 Despite being nearly made bankrupt three times in 14 years, which led him to struggle financially and took a toll on his parents’ mental health, Dr Ong remained resolute on his entrepreneurial path. Having emerged from his ordeal, Dr Ong said that trusting his conscience and paying close attention to facts helped him overcome situations when people disagreed with him. Speaking from experience, he also reminded fellow alumni to always remember their alma mater and keep in touch with their mentors and professors.

“The NTU family is the first group of professionals who will always be there to provide support as you overcome your challenges to succeed in life,” said Dr Ong, who is currently the CEO of Resvenus, an R&D lab and online retailer of health and beauty supplements that he has founded. Today, Resvenus has an automated fulfilment warehouse in Singapore with distribution partners in over 12 countries.

Citing an example, Dr Ong said that even though he used to sleep through his former professor’s lectures on commercial laws, the same professor, Dr Toh See Kiat, patiently listened to Dr Ong’s commercial legal problems. Dr Toh also helped him reach a settlement after close to a year by providing him with essential legal support and advice.

Ms Syahidah, who graduated with a Masters in Knowledge Management (KM) degree, echoed Dr Ong’s sentiments. Born with cerebral palsy, Ms Syahidah spoke about how it was challenging for her to stand, walk and travel for long periods. When she had the opportunity to pursue her Masters in Knowledge Management (KM) at NTU, Ms Syahidah’s concern about travelling for a long period to attend her night classes was allayed when the campus housing department provided her with a room to stay throughout her two-year study.

During her course, she joined the student-led KM community supervised by Professor Lee Chu Keong. After graduating from NTU in 2013, Ms Syahidah found it challenging to get a job because of her disability. Thankfully, she managed to do so within a year, with the help of the KM community.

“Through the support and connections from the KM community, I managed to land a job at Sport Singapore, which eventually opened my path of competitive archery,” said Ms Syahidah, who became the first Singaporean world champion in para-archery. She added that the help received from NTU meant a lot to her, and she is now confident in communicating openly – a skill that she believes everyone should possess.

Unlike the other two alumni who grew up in Singapore, Mr Goh was a “kampung boy” from Penang, Malaysia. After his father passed away, Mr Goh’s family was left with zero income, and he started working part-time at the age of 16, washing plates and cleaning toilets in fast-food joints. When he came to NTU on a scholarship, he continued earning some pocket money by coaching primary and secondary school students in basketball.

Reflecting on his NTU experience, Mr Goh learnt that “it is ok not to be ok”. Despite feeling uncertain and upset about his future career with graduation approaching back then, Mr Goh bravely sought counselling on campus to make sense of his thoughts. “Miss Mariam Hamid from the Student Counselling centre identified my problem with depression, and she referred me to a medical professional. Being aware of my problems with depression helped me to battle it in other life episodes,” he said.

Despite graduating in 2009 when the economy and job market were hit by the global financial crisis, Mr Goh relocated to Kuala Lumpur, Malaysia, to pursue his ambition of becoming an investment banker. About six years later, he was made CEO of Bursa Malaysia-listed Hexza Corporation Berhad at the age of 32, making him one of the youngest CEOs of a listed company in Malaysia. Three years later, he left to join Paragon Globe Berhad, a listed property conglomerate, as CEO. Today, Mr Goh has since left the company to embark on his entrepreneurial journey in engineering and consultancy in a data centre in Malaysia.

Looking back at how he had sacrificed the time spent with his widowed mother because of constantly working up to 130 hours a week, Mr Goh advised the webinar participants to “focus on things that can help them move forward” instead of “taking up more than they could handle”.

Through this webinar, participants leant how they could overcome uncertainties that come may their way. They also heard of the value and importance of being part of the University’s growing alumni network and reaching out to their respective alumni associations for personal and professional support.