“The Organization for Economic Co-operation and Development’s (OECD) Global Network of Schools of Government” Annual Meeting was held at the National Centre for Public Administration and Local Government in Athens, Greece, from 20th to 21st June 2022. The central theme of this year’s meeting is “Exploring post-pandemic learning cultures in the public sector,” which was divided into several sub-themes including “Developing the resilient civil service of the future,” “Next-Generation Schools of Government,” “Problem-Solving and the new Executive Branch of the Greek Public Administration,” and “Promoting cultures of career-long learning: what role for Schools of Government?”  Over 50 representatives from more than 30 countries attended the meeting. Distinguished speakers included Prime Minister and Interior Minister of the Greek government as well as heads of relevant countries’ national schools of government and government agencies. 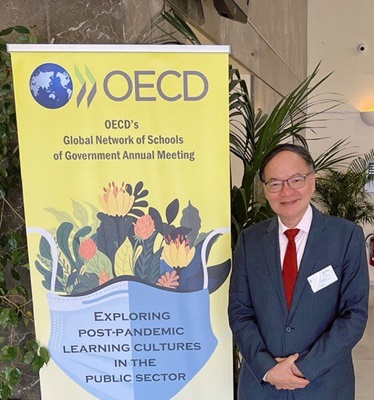 Professor Liu Hong was invited to speak about the third theme of the conference, "Next-Generation Schools of Government". He gave a detailed introduction of the innovations and new initiatives adopted by Nanyang Technological University (NTU Singapore), especially the Nanyang Centre for Public Administration (NCPA), in the fields of learning and research, harnessing opportunities arising amidst the global pandemic, new technologies and geopolitical changes. He also explored the opportunities for collaboration and exchanges with the representatives of relevant institutions. 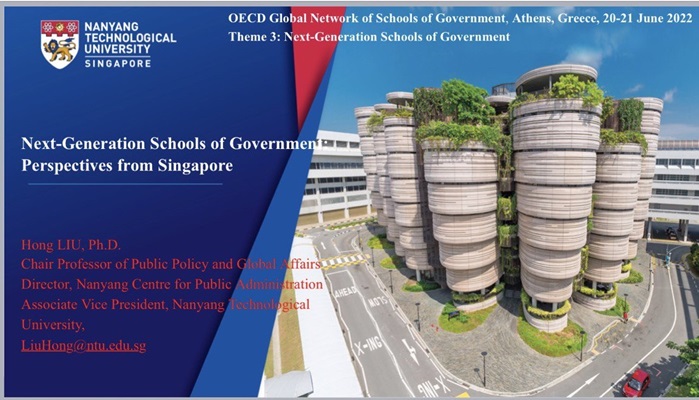 The OECD Global Network of Schools of Government provides a unique platform for schools to exchange on experiences and good practices in ensuring that public sector employees have the skills and competencies to address current and future priorities. Annual conferences have been held in different countries since 2014. NCPA has benefited from being involved in such prominent international forums so as to strengthen its connections and experience-sharing with peer institutions in the globe. It is with this spirit of mutual learning that NCPA is to formally join the OECD Global Network of Schools of Government.