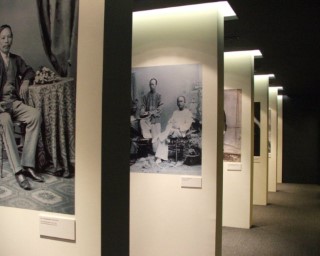 Chinese More Or Less: An Exhibition on Overseas Chinese Identity

Occupying some 6,000 square feet, the exhibition titled, Chinese More Or Less: An Exhibition on Overseas Chinese Identity, is a central attraction in the Chinese Heritage Centre’s galleries. Conceptualised by the Centre’s former director, Ms Lynn Pan who is herself the author of the book “Sons of the Yellow Emperor” and editor of “The Encyclopedia of the Chinese Overseas”, the theme of “Chineseness” and Chinese Identity is explored and translated into visually interesting exhibits. Through the exhibition, visitors are probed into thinking such notions as

How Chinese am I?
In what sense am I Chinese?
What does it mean to be Chinese?

Three interesting sections make up this exhibition – Self, Other Self and Other Than Chinese

Self
This section showcases portraits of Chinese men and women from different eras, in different places and attires. These visuals are prone to prompt visitors into thinking about what makes these different looking Chinese “Chinese”? The portrait is a means of self-representation. That representation is formed and transformed in the perception of others. And while I see myself as one kind of Chinese, others may see me as another kind.

Other Chinese
When Chinese leave their homeland (China), they bring with them memories, traditions and cultures from home. The “Chineseness” of such traditions and cultures are depicted through plentiful visuals and artefacts. The visitor will come away from this section with the impression that there was a time in the diaspora’s history when the familial, cultural and political points of identification were entirely Chinese.

Other Than Chinese
On entering this third section, the visitor will discover that the world is more plural, that it changes faster and that there are now a variety of reference points that are other than Chinese. In terms of historical backdrop, this section begins with the age of European imperialist dominion. The exhibition looks at the composite identities of the Baba or Straits Chinese (Malay and Singapore), the Peranakan Chinese (Netherlands Indies) and the Chinese Mestizo (Spanish Philippines) showing the mingling of Chinese, local and European cultural influences in these identities.

From colonial West to the metropolitan west, the exhibition also explores the identity of a type of migrant not found in Southeast Asia – the student-turned-settler coming in search of better educational opportunities. Such a person looks upon his country of choice not as a place of settlement so much as an intellectual or artistic Mecca. Similarly, the work of Paris-based painter Zao Wou-ki who wrote his first name in Chinese characters and his last in Western orthography is also showcased. What this symbolizes is a double heritage – Chinese and other-than-Chinese. How an overseas artist relates to that heritage in his work is a theme explored in this section of the exhibition.