He almost gave up on his Bachelor of Accountancy programme midway, thinking it “wouldn’t make money.” However, not only did he graduate with a First Class Honours in Accountancy from the Nanyang Business School (NBS), Nanyang Technological University, Singapore, but he also co-founded Sunseap, a solar energy system developer and operator with sights set on contributing to Singapore’s, and the region’s, sustainable future.

“Stick it out in accountancy,” Lawrence was advised by his professor back then, “and you can be anything you want to be after.” That was in 1998, he had just completed Year One and felt he wanted to become an economist or investment banker instead.
Lawrence heeded the counsel and became a certified public accountant and chartered financial analyst. While he did land a job in investment banking, he quit after 10 years and founded Sunseap (now EDPR Sunseap after acquisition) in 2011 with fellow NTU alumnus Frank Phuan. 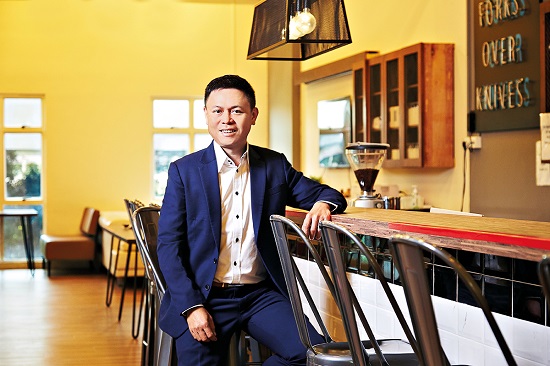 Why is sustainability important to you?
When we started Sunseap, I had just become a father. That made me realise I had to take responsibility to help protect our environmental resources, such as land and water, so that future generations can continue to live on a healthy planet. Just look at how alarming the weather patterns have changed worldwide in the last two years.

What is EDPR Sunseap, and what are some of its businesses?
EDPR Sunseap is an energy solutions provider with a portfolio of services for businesses and homes. These include solar PPA (power purchase agreement), clean energy plans, and EV (electric vehicles) charging.
Our solar PPA allows commercial building owners to utilise solar energy without paying any upfront investment cost. EDPR Sunseap fully finances the solar system and installs and maintains them for companies. The latter pays for the solar energy consumed at competitive electricity tariff rates over a period of 20 to 25 years.
We were trying to tackle the challenge of environmental sustainability through a financially sustainable approach. We decided to take ownership of the solar energy system – this meant customers no longer needed to invest huge amounts of money in a solar energy system that they must upkeep for the next 20 or 30 years.
What were the early years like for the energy business?
Most of our early years were spent educating customers and instilling confidence. For example, someone would say, “If I want to waterproof, the solar panels will get in the way.” So, we advised, “No problem. We can help you move the panels before and after.” Another asked, “What if I want to sell the building?” We recommended, “Why not buy over the solar energy system so you can sell it together with the building?” We tackled all questions one by one. 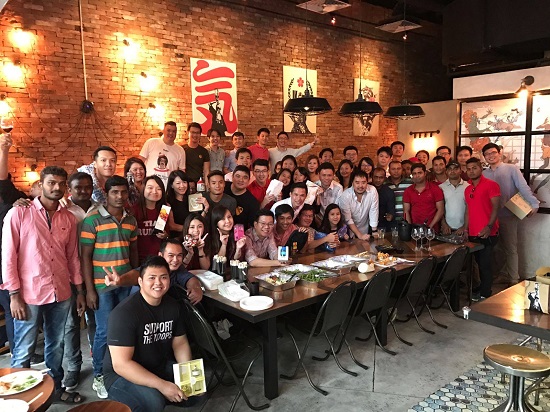 EDPR Sunseap colleagues during a Christmas gift exchange in 2016.

Today, EDPR Sunseap operates solar projects that generate more than 500 MWp (megawatt peak) of energy – enough to power nearly 350,000 households annually throughout Singapore, Southeast Asia, and the Pacific. Its clients include Apple, Facebook, Amazon, and Microsoft; regional utility companies such as EVN and EDC; and Singapore agencies and corporates such as the Housing and Development Board, Ministry of Education and Port of Singapore Authority.

With companies increasingly leveraging big data to improve profitability and processes, where is accounting as a profession heading?
Accounting is still relevant as a profession. In fact, big data has made accountants even more important. The general public can trust that the information presented is accurate and fair only when a public accountant signs it off.

This is especially crucial in sustainability reporting, which reflects a company’s performance and practices in ESG factors. Accountants can take leadership and ownership.
From installing solar energy panels on rooftops to building floating offshore solar farms, EDPR Sunseap has consistently and successfully pivoted itself. What’s the secret?
Our work demands both creativity and sensibility. We began with solar energy panels where sunlight is absorbed, electricity is generated and conveyed to an inverter and then distributed to power the building exclusively.
We went on to create virtual power plants – our first was for Apple. To generate more than 40 GW hours of renewable energy annually, which the tech giant needed in Singapore, we installed 1.1MWp rooftop solar at its Yio Chu Kang office. We collated the rest from solar panels across 600 sites in areas such as Jurong, Tampines, and Sembawang. As a result, Apple’s operations in Singapore, including its Orchard Road flagship store, are 100% powered by renewable energy.
Taking a holistic approach towards a project involves both demand and supply. Since clean energy is limited, we must find ways to help customers manage their demands. Besides reminding them about basics such as switching off air-conditioning if not in use, we also help them access energy efficiency solutions and provide data insights into their electrical loads. 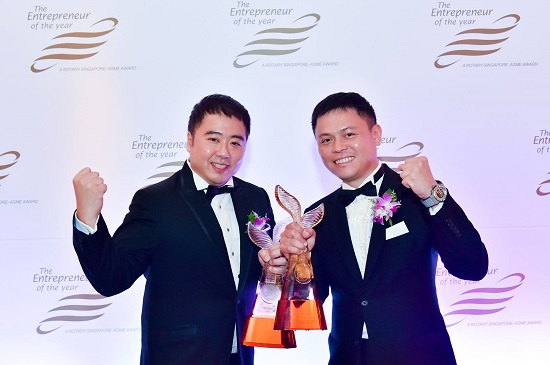 NTU has set various sustainability goals, including achieving carbon neutrality by 2035 and reducing energy and water use by 50% by March 2026. As part of the NBS Alumni Advisory Board, do you have plans to help?
Working with Prof Srinivasan Madhavi, who leads the Sustainability Task Force at NTU, we leverage NTU’s technological expertise and students to develop projects for the future, be it battery backup or offsite generation, with the aim of piping power back to Singapore.
I would like NBS to take the lead in sustainability, for example, by actively incorporating sustainability into the curriculum and marketing those programmes. Sustainability is a multifaceted battle, and other schools and departments at NTU play a part too. I am excited about this because it requires us to change mindsets and “start over on a clean slate” – education is key.

Our Alumni, Our Inspiration