中文
The Lien Ying Chow Legacy Fellowship (LYCLF) at Nanyang Technological University, Singapore (NTU Singapore) and the Singapore Manufacturing Federation (SMF) jointly organised a webinar on "RCEP: New Cooperation Opportunity for Singapore and China" on 18 March 2021. The webinar aimed to have an in-depth discussion on how Singapore and China could seize the opportunity to jointly promote regional economic development through RCEP. More than 200 people participated in the webinar.
In his opening speech, Professor Liu Hong, Director of Nanyang Centre for Public Administration (NCPA) and Executive Director of the LYCLF, said Sino-US trade frictions, the unilateralism advocated by the Trump administration of the United States, and the global outbreak of the COVID-19 pandemic had shown the importance of regional cooperation among ASEAN countries. Singapore has always played an important role in driving the RCEP trade pact. To continue doing so, it needs to stay open and maintain its connectivity. A stable and active multilateral cooperation agreement is an effective way to achieve a win-win situation. China introduced the "Belt and Road Initiative" (BRI) in 2013. Singapore is a vital node along the Maritime Silk Road and occupies a strategic position. China's BRI and RCEP are complementary and interconnected. It is in the interest of ASEAN countries as well as China to achieve multilateral win-wins.
Mr Douglas Foo, President of the SMF, believed that although RCEP has not officially entered into force, opportunities in line with Singapore's competitive advantages have already emerged. For example, global supply chains and other opportunities may come along when the RCEP comes into force. Companies in Singapore should ride on Singapore's advantageous position in Southeast Asia's supply chain to establish a foothold in this new supply chain. He also called on the companies in Singapore and China to review their internal processes to identify key areas for improvement for cross-border cooperation, which will help strengthen businesses' resilience in the two countries.
The webinar was moderated by Mr Anthony Tan, Deputy Chief Executive Officer of Singapore Press Holdings. The speakers were Ms Sulaimah Mohmood, Singapore's Chief Negotiator for Regional Comprehensive Economic Partnership (RCEP) and Senior Director of ASEAN Division at Ministry of Trade and Industry; Mr Eugene Gan, Chief Executive Officer of Changi Airport International Pte Ltd; Mr Wu Chuan, Deputy Director-General of Hainan Provincial Bureau of International Economic Development; and Dr Yang Yi, Deputy Director-General of China-Singapore (Chongqing) Demonstration Initiative on Strategic Connectivity Administration Bureau. Except for Ms Sulaimah, all speakers and the moderator are Lien Fellows. 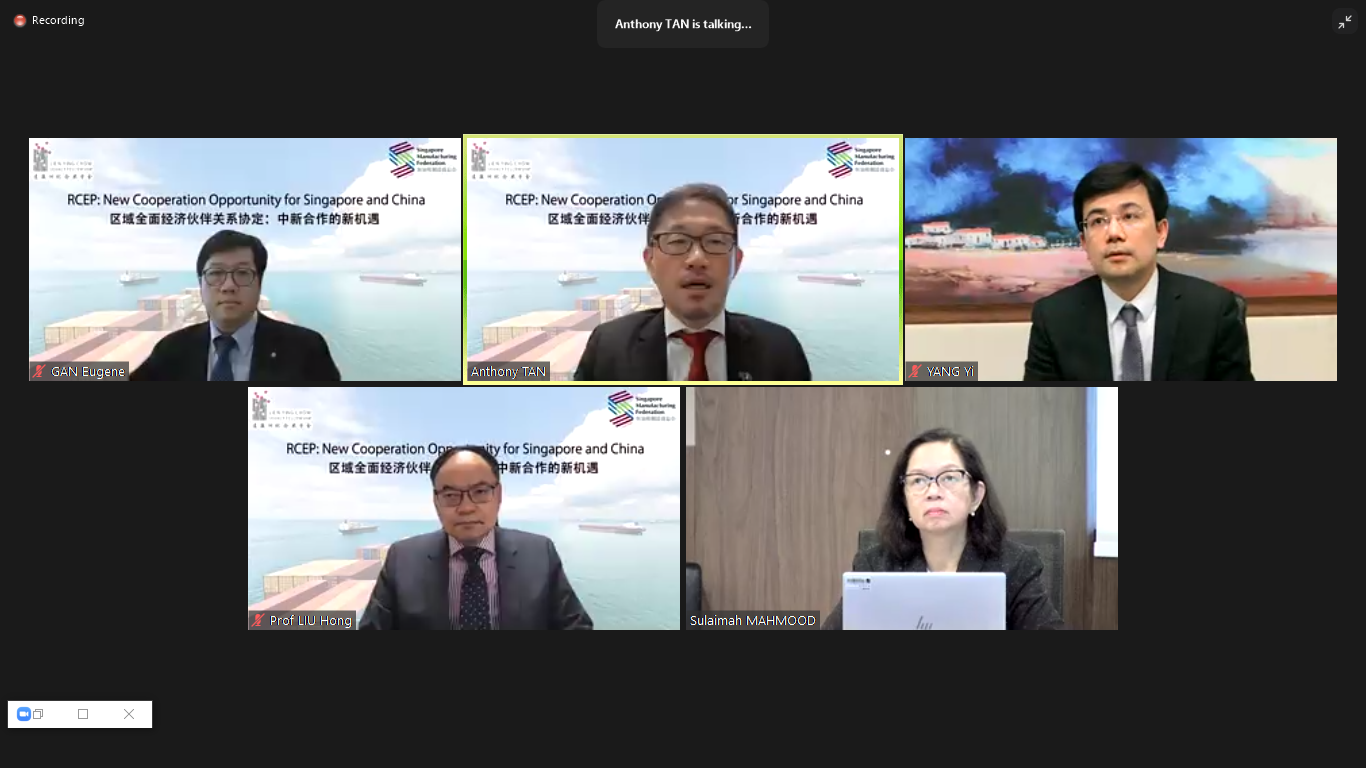 The speakers, in general, agreed that RCEP and BRI would bring new opportunities to Singapore and China. The China-Singapore (Chongqing) Demonstration Initiative on Strategic Connectivity was the third inter-government project, while the Hainan free-trade port, which the Chinese government is striving to build. These two key areas of cooperation for Singapore could also serve as pilot projects for instituting the RCEP agreement.

The RCEP agreement would fully open up the market among member states, which would significantly drive trade growth in goods and services. The cross-border industrial value chain that may be reshaped in the future will provide massive potential for aviation and maritime cooperation between Singapore and China.
Attendees participated actively in the webinar by posing their questions in the Zoom's Q&A feature.