On the afternoon of 6 Sep, Mr. Zainul Abidin was invited to give a lecture for students from the "Mayors Class" of Nanyang Centre for Public Administration. The topic was "Singapore's Multiculturalism and Singapore-China Relations". Mr. Zainul shared with the students the development of China-Singapore relations under the new world reset and Singapore’s governance experience of multi-racial integration. Prof Liu Hong, Director of NCPA, introduced Mr. Zainul's experience to the students and encouraged them to actively ask questions and exchange ideas. More than 40 students from the "Mayor's Class", Mr. Wang Hang, Deputy Director of NCPA, and researcher Dr Huang Lingli also participated this event. 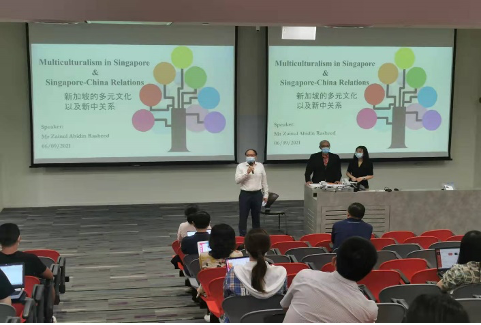 Mr. Zainul is the Non-Resident Ambassador to Kuwait and a board of trustee member of Nanyang Technological University. He has served as a former Member of Parliament in Singapore and a former Senior Minister of State for Foreign Affairs. In the lecture, Mr. Zainul reviewed the history of the establishment of diplomatic relations and economic cooperation between Singapore and China, from Suzhou to Tianjin, to Xi'an, to Guangzhou, and most recently Chongqing. He summarized the continuous development of cooperation between Singapore and China: From basic industrialization to ecological development, logistics and transportation construction, and digitalization, Singapore and China have established mutual trust and mutual benefit in interconnection.

The participants in the lecture asked Mr. Zainul about Singapore’s policy of multicultural establishment and racial harmony. Mr. Zainul also explained in detail the proportion of ethnic minorities in Singapore's GRC, the proportion of multi-ethnic residents in HDB flats, and the restrictions on the number of Malay students in schools. The students in return explained China's ethnic policies. As a leader of minority ethnic group, Mr. Zainul encouraged the younger generation to avoid extreme ethnic and religious ideas, to strengthen mutual understanding and dialogue, and promote social harmony and common prosperity.