Acing actuarial science one award at a time!

“Receiving a call from the Institute and Faculty of Actuaries (IFoA), informing me that I had won the Sir Edward Johnston Prize, took me by surprise”, said Chang Tze Heng.
“It’s not often that one receives an award from a world-renowned institution, considering the fact that there are many deserving students who opted for the Actuarial Science programme”, he added humbly.
Chang Tze Heng, Bachelor of Business, Class of 2016, Nanyang Business School (NBS), is a recipient of the prestigious Sir Edward Johnston Prize 2016. The Prize is awarded to the best performing graduating students in actuarial science from universities across the region with whom the IFoA enjoys close links. The winners are decided by the university and the IFoA’s Independent Examiners.
​The IFoA is UK's only chartered professional body dedicated to​ educating, developing and regulating actuaries based both in the UK and internationally. In 2013, the organisation received a bequest from Sir Johnston’s widow, Christine Ottewill, and established ​the Sir Edward Johnston Prize​ in his honour.  He was the sixth person to hold the post of Government Actuary in the UK and, made significant contributions to the actuarial industry.
No stranger to hard work and success, Tze Heng has a string of awards and honours to his name. The exemptions he obtained as a result of attending the programme at NBS, gave him a head start when it came to attaining professional certifications from the IFoA. Accredited by the IFOA – a leading professional body in the actuarial industry – the NBS Actuarial Science programme is recognised as one of the best in actuarial education.
He credits his heightened interest in the field to NBS’ compulsory internship programme. Through the programme, he was able to explore possibilities in the industry and find a job before graduation.
Currently, Tze Heng works as a Pricing Analyst in a multinational reinsurance firm called Pacific Life Re. His team is responsible for delivering pricing quotations to the company's clients in South East Asia. Case studies, assignments and various project​s at NBS provided a solid foundation in writing and presentation, as well as refining his problem solving abilities – all skills important to his current role. The NBS experience helped to embrace the dynamic environment of reinsurance pricing and learn new things every day.
Quoting the words of Arsene Wenger, Manager for the Arsenal Football Club, he said, “Tenacity is the most underrated quality in life”.
“If you can keep yourself motivated and persevere towards your life goals without losing focus, you are bound for success”.​
Source:
Category : 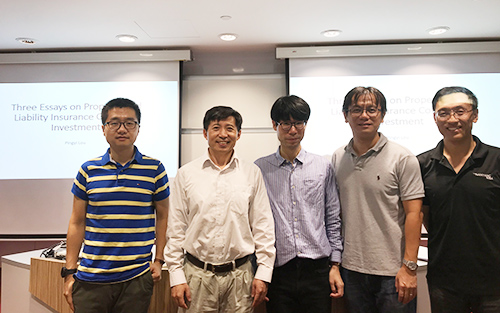