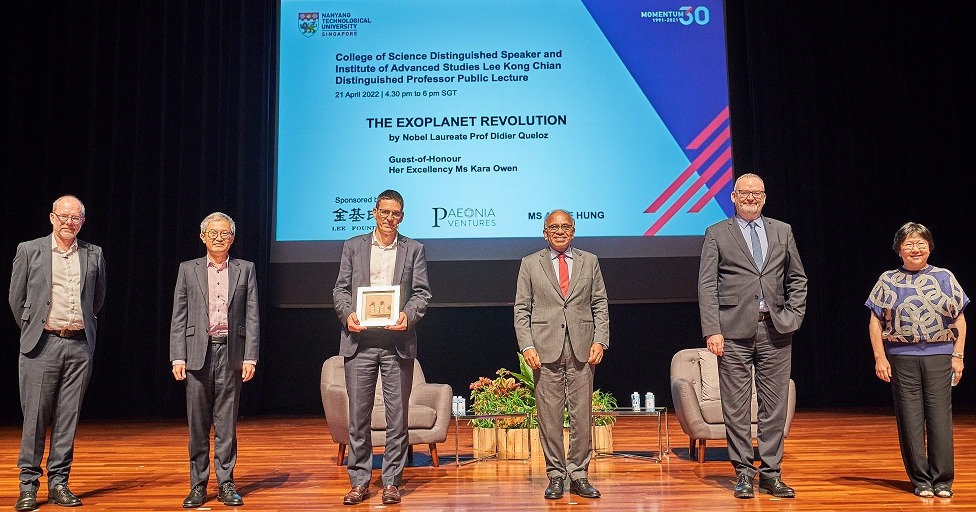 The hybrid format public lecture, held on 21 April 2022 at the Nanyang Auditorium, was organised by the College of Science and the Institute of Advanced Studies at Nanyang Technological University with support from the Lee Foundation and Ms Alice Hung, Founder of Paeonia Ventures. The public lecture was well-attended by 430 participants and as many as 225 participants joined virtually across the globe. Majority of the participants were students from diverse educational backgrounds, including many high school students from the internationally accredited high schools.

Our distinguished speaker, Nobel Laureate Prof Didier Queloz, is the Jacksonian Professor of Natural Philosophy in the Cavendish Laboratory and the Director of Leverhulme Centre for Life in the Universe at the University of Cambridge.

Although many exoplanets have been found, yet scientists around the globe are in the quest of finding life-forms across the universe. To gauge deep on whether a planet supports life, one needs to first understand what is so special about the Earth that living species like us are here, and then compare and contrast it with the characteristics of other recently discovered planets.

Prof Didier Queloz addressed the questions concerning the origin of planets, their structure and ingredients required to make a planet capable of supporting life. Taking the example of planets from our solar system, he started with a brief discussion on the classical planetary theories, which for many decades were believed could provide insight into the location and the size of a planet. However, in 1995, he obtained the novel results concerning the first extrasolar exoplanet relying on the advanced equipment he built. The results challenged the then existent planetary theories, and later led to the “Exoplanet Revolution” through the discovery of many more planets. Till date, about five-thousand exoplanets have been discovered.

Since the important question is about finding an Earth-equivalent, he made a comparison of all the known exoplanets with the Earth in terms of parameters like mass, radii, density and period. His studies provides an estimate about the probability of finding a planet with a particular mass and size; and which planets are actually similar to our home-planet Earth in terms of the quantities mentioned earlier suggesting that they might have same composition. His talk described the signatures of geological and biological evolution of planets and underlined the criteria governing the habitability of these planets. He explained that life is more likely to exist on small planets orbiting smaller stars, as the smaller stars would emit lesser heat radiation and can provide an endurable temperature for living species.

The interesting lecture was followed by an interactive question and answer session, moderated by Prof Simon Redfern, Dean, NTU College of Science. Prof Didier addressed a variety of questions extending from the design of current telescopes and those to be manufactured in future, the impact of science fiction on public awareness, to the fundamental variation of seasons on other planets. A few students also put forward questions concerning the feasibility of human beings moving to other planets in the near future and possible research outlooks.

In less than two hours, Prof Queloz was able to inspire the minds of a younger generation at NTU - myself included. From the start to finish of The Nobel Lecture by Prof Queloz, I was completely enthralled. As Prof Queloz spoke about his scientific discoveries, I was immensely impressed by his expertise and enthusiasm. His speech not only showed me his passion to push humankind closer to the scientific truth, but ignited my own passion to learn more about astrophysics. What impressed me the most was his ability to take esoteric and intellectual concepts and explain them in a simplistic manner that even a high-school student like me could understand.

Through the course of his lecture, I went from sitting on the edge of my seat, to not being able to sit at all. I had to take the opportunity to ask Prof Queloz a question. While he shared a plethora of insights regarding the universe, I wanted to know how he felt in the moment that he discovered his scientific breakthrough. As I rose from my seat among the ocean of people and walked to the microphone at the front of the auditorium, I asked him: “As a scientific pioneer, how did you feel when you made your ground-breaking discovery?” 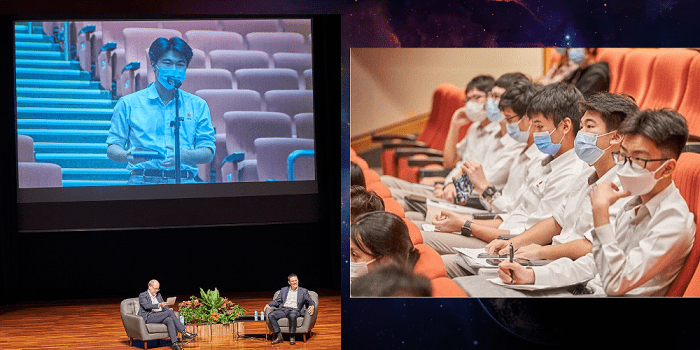 In the back of my mind, I was expecting him to tell me something that I already knew or assumed – that he felt shocked, or surprised, or utterly mesmerised. However, much like the truth that we live in a chaotic universe that, in many ways, is completely unpredictable - his answer was unexpected. His reaction to his discovery went against my expectations. He did not feel shocked when he made such a ground-breaking discovery but instead he felt grateful for what he and the scientists before him had done for humanity. He changed the course of history whereby future generations will use his findings for advancing the scientific community. What I learned in that moment, beyond the insight that he shared about the universe, was that science isn't a quest for glory, it is a simple quest for knowledge. Prof Queloz reminded us as an audience of which I will never forget to be humble.