The Institute of Physics Singapore (IPS) is the leading scientific body for physics in Singapore, with elected members from local institutions. Every year, IPS organises a meeting to bring together researchers in physical sciences from Singapore Institutions and overseas. The 2022 annual meeting, sponsored by the Institute of Advanced Studies at NTU, took place from 28 to 30 September 2022 at the School of Physical and Mathematical Sciences, NTU and attracted about 400 participants.

The IPS Meeting is the perfect occasion for researchers and students from all over the world to present their works and engage in new collaborations. During each day of the meeting, several parallel tracks of technical sessions took place, and a variety of topics were addressed, from quantum physics and 2D materials, to plasma physics and biophysics. Altogether, 99 such technical talks were presented.

The first day featured two plenary talks by Assistant Prof Yong Ee Hou (NTU) and Assistant Prof Denis Bandurin (NUS). Prof Yong explained how the shape of the eggs of several bird species can be described as an ellipsis. He also showed a correlation between the degree of ellipticity and asymmetricity of the egg and certain characteristics of the bird, such as its mass. After that, Prof Bandurin switched directions, moving towards the world of plasmonic and single-photon detection. He presented his recent works in demonstrating the electronic version of the Fizeau drag in graphene plasmonic. The Fizeau effect is the dragging of light by means of the flow of water. The talk ended with his recent results in achieving single-photon detection in high temperature superconducting nanowires.

The poster session held on the second day was another occasion for young researchers and students to promote their work among their colleagues. Apart from the usual format of poster presentation and exhibition of the 46 selected physical posters, IPS also organised a 3-minute-pitch session where each poster author had the opportunity to showcase the main achievements of their work in front of all the participants. The second day of IPS ended with a pizza party and drinks for all the participants, as per tradition.

Every year, IPS awards exemplary researchers and academicians for their outstanding contributions in their fields. This year, an IPS Award ceremony was also held during the meeting and two of the awardees delivered plenary talks related to their academic experience and discoveries: the recipient of the IPS World Scientific Award, Associate Prof Yang Shengyuan (SUTD), gave a lecture on the physics of emerging particles in crystal and Prof Wang Qijie (NTU), who received the IPS Nanotechnology Physics Medal, talked about his efforts in developing quantum cascade lasers. 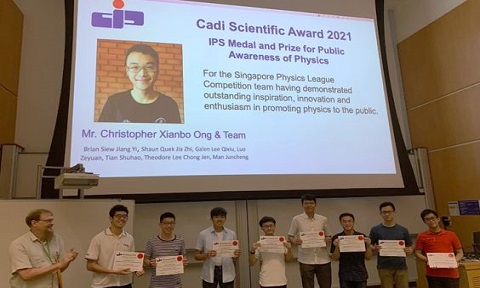 The IPS meeting was concluded with a whiteboard session organised by Quantum SG, the quantum community in Singapore. The goal of the session was to bring together all the researchers working in any quantum-related field. Each researcher had the occasion to briefly introduce his work to the rest of the community.

IPS is always a great opportunity for all the researchers to gather and connect. Thanks to the relaxed COVID restrictions, the meeting could go back to in-person format and alternate technical moments with networking occasions.