Our eminent speaker, Prof Virginijus Siksnys, is the 2018 Kavli Prize laureate in Nanoscience and the chief scientist and head of the Department of Protein-Nucleic Acids Interactions at the Vilnius University Institute of Biotechnology. Held on 26 August 2022 at the Tan Chin Tuan Lecture Theatre, the lecture was sponsored by the Lee Foundation and it was well attended by around 200 attendees, both online and in-person. We would also like to thank the Ministry of Education Curriculum Planning and Development Division for helping to disseminate the event publicity to the pre-university teachers and students. 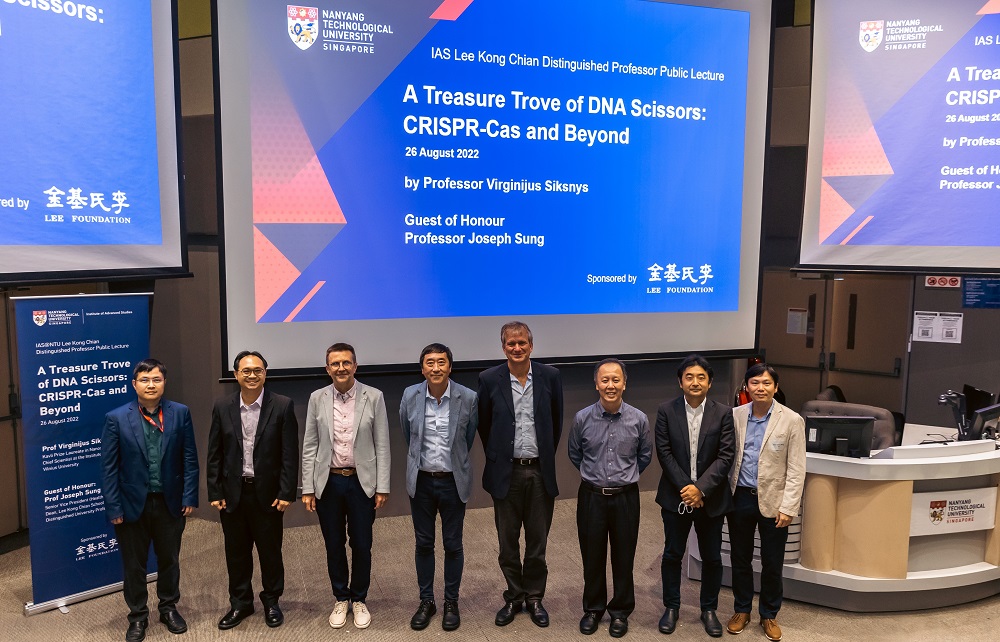 The talk's title "A Treasure Trove of DNA Scissors: CRISPR-Cas and beyond" makes reference to Prof Siksnys' comparison of his Kavli Prize winning discovery of DNA cutting protein CRISPR-Cas 9 to a pair of scissors. In 2007, Prof Siksnys came across a paper in the Science journal that described CRISPR in Streptococcus thermophilus bacteria found in cheese and yoghurt. This piqued his curiosity and led him to start studying the structure and properties of the CRISPR system. Among his earliest discoveres, he found that Cas9 endonuclease could be readily re-programmed to cleave any target site in the genome at low cost. These results were published in PNAS in 2012, which heralded a new era of DNA editing technology. According to Prof Siksnys, the time before 2012 can be called “BC” (i.e., “Before Cas9”), while the period after 2012 can be called "AC" (i.e., “After Cas9 period”).

After the discovery and success of Cas9, Prof Siksnys’ group started looking into other Cas enzymes that could function as alternative pairs of scissors. He found that several Cas12f nucleases were active in eukaryotic cells and could be readily programmed to cleave double stranded DNA in a similar manner as Cas9. Importantly, Cas12f is much smaller than Cas9, which would be advantageous in delivery.

Even after finding two state-of-the-art programmable DNA cleaving enzymes, Prof Siksnys’ quest of finding better alternatives for genome editing did not end. This was when he started looking into ISDra2 transposition by a TnpB protein, which belongs to 15200/605 family of transposons. In his work, he found a Transposon Associated Motif (TAM), TTGAT, that was characteristic of both TnpB and TnpA transposons. Further research into the properties and structure of these transposons led to the discovery of novel RNA guided genome editing capabilities of TnpB. Comparing TnpB with Cas9 and Cas12f based on their properties, Prof Syksnys said, “I have three tools in my genome editing toolbox: Cas9 - the biggest scissors, Cas12f - the medium sized scissors, and TnpB - the smallest scissors. I am hopeful that the CRISPR toolbox can do amazing things for gene therapy in the future.” 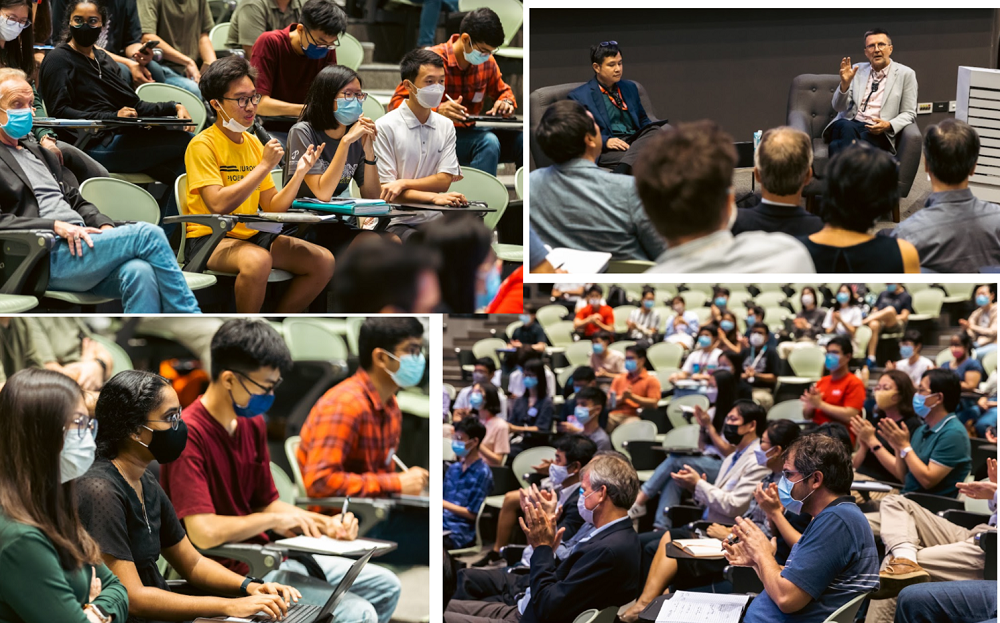 Enthusiastic participants engrossed in the Q&A session with Prof Syksynys.

In the Q&A session that followed, there were some intriguing questions, such as the feasibility of using Cas9 in human disease medication. Prof Siksnys gave an example of an ex-vivo approach, where the bone marrow was taken out of the patient and treated before being put back in to produce healthy blood cells which can travel across the human body. Prof Siksnys highlighted that while curing a disease in the human body may still be difficult with current technologies, future technologies in development can prove very useful. Researchers are also raising genetically modified pigs, which can be used to donate organs to humans in need of organ replacement to curb the issue of lack of organ donors.

In response to further questions regarding preparation, practices and work required to reach the pinnacle of research and development in the sciences, Prof Siksnys said, “Do what motivates you, what keeps you awake, if it is passion for sciences, you will reach there one day. You won’t learn until you are ready to make many mistakes. After all, science is just about moving from one mistake to another.”

Frontiers in Peptide Science and Drug Discovery: A Scientific Symposium in Honour of Professor James Tam

Good Recipe for Good Health – WHAT and WHEN to Eat

Bio-intelligent Lasers for Healthcare: Tiny Lasers that can Feel and Think