The 4th International Workshop on Quantum and Topological Nanophotonics (QTN), organised by the Centre for Disruptive Photonics Technologies (CDPT), TPI, NTU Singapore in collaboration with USA East Coast Universities and supported by IAS and SPMS, was held from 28 to 30 April 2022 at the Nanyang Executive Centre at NTU.

The recent easing of COVID-19 restrictions had allowed the workshop to be run as a fully in-person event, which facilitated deep discussions and exchange of ideas among participants on fundamental aspects and recent advances of quantum and topological nanophotonics as well as the future trajectory of these vibrant research fields.

The workshop was opened by the captivating talk of the 2010 Nobel Laureate in Physics and IAS speaker, Prof Konstantin Novoselov (NUS), on how the properties of van Der Waals heterostructures made with 2D materials can be modified with great precision for applications in electronic and optical devices.

Attentive and engaged audience during the Q&A with Nobel Laureate Prof Konstantin Novoselov.

The next session focused on lattices and photonic crystals, where my attention was caught by the talk of Prof Yidong Chong (NTU) who spoke about photon blockade in photonic lattices. The multi-faceted discussion on quantum devices featured a great talk on superconducting nanowire single photon detectors by Prof Val Zwiller (KTH), while the advanced applications of quantum devices were elucidated by, for example, the talk on option pricing using single photons on photonic chips by Prof José Ignacio Latorre (NUS).

The second day’s schedule was well balanced between the topics of quantum devices and photonics. It expanded the discussion on quantum devices to quantum systems. IAS speaker, Prof Moti Segev (Technion) began the proceedings with a comprehensive talk on the basics and recent developments in the field of photonic time crystals, followed by talks which featured both the theoretical and experimental aspects of new discoveries in exotic materials. Ideas of quantum systems were further reinforced by talks on how the dynamics and positions of atoms and electrons can be controlled. Prof Olga Smirnova (Technical University of Berlin) gave a particularly enlightening talk on synthetic chiral light and how it can lead to chirality sensitive observables.

From here, the workshop moved to topics which further the horizon of nanophotonics by introducing the concept of picophotonics. The sessions included talks on both the theoretical advances and how they can be featured at the forefront of applied research. The first two theoretical talks were complemented by Prof Nikolay Zheludev (NTU) talk on non-destructive imaging with deep subwavelength resolution using topologically structured light. A particularly intriguing session was that of quantum nanophotonics research enabled by free electron beams, where Prof Javier Garciá de Abajo (ICFO) gave an illuminating talk about how integrating free electrons in nanophotonics enables the study of previously inaccessible phenomena.

The third day began with a talk by IAS speaker Prof Michal Lipson (Columbia University) on advances in Silicon Photonics and how these devices can be made resilient to fabrication issues. Then Prof Ranjan Singh (NTU) spoke about topological THz silicon photonics and the role it will play in the development of the next generation of communication technology. Other two talks which I found inspiring were delivered by Prof Harry Atwater (Caltech) who spoke about his work on TMD excitons and colour centers in hexagonal boron nitride and the last talk of the workshop, by Prof Cesare Soci (NTU) who spoke about quantum and topological metaoptics in halide perovskites. 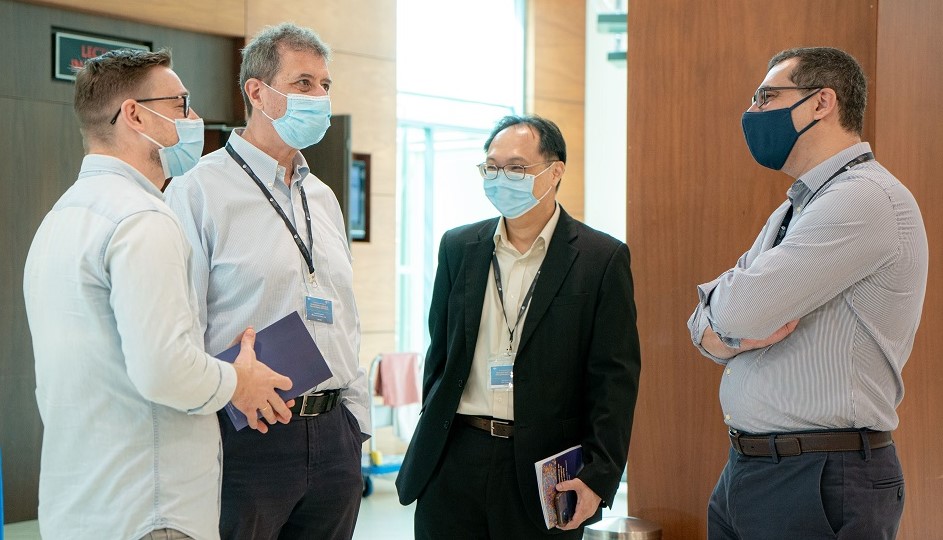 The workshop also featured two poster sessions, with a format that allowed students and research fellows to have rapid presentation of their findings to the whole audience and the group of international experts. The coffee and lunch breaks facilitated avenues for discussions and one-to-one conversations. The graduate students were able to speak to the pioneers of their fields and were hence able to gain much needed exposure to the frontiers of their research areas. The workshop was then concluded with the IAS awards for the best posters. 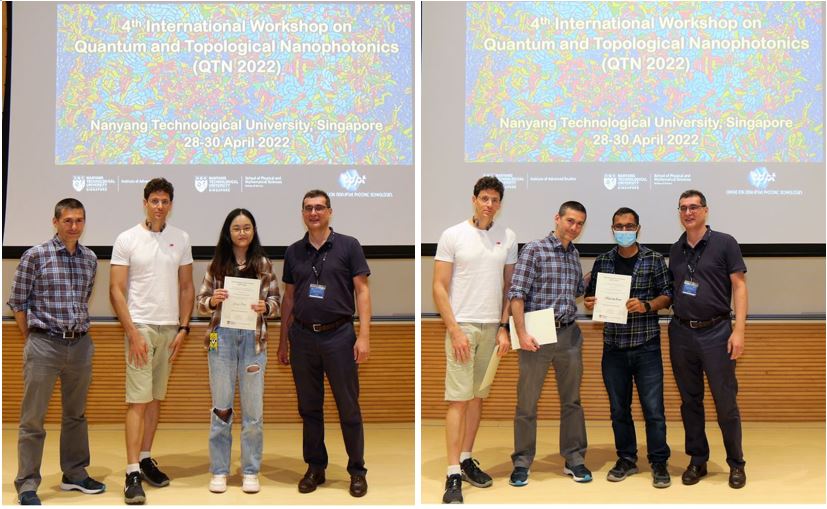 The 4th QTN workshop was a resounding success. Not only were the current advances of quantum technologies and nanophotonics covered, but there was also space for an outlook on how to further these research fields. It was clear that by integrating novel quantum and topological nanophotonic phenomena, one can both broaden the understanding of physics while expanding the horizon for novel devices applications. I felt very glad to have had the opportunity to attend a workshop where cutting edge research was presented, where speakers felt at ease in presenting the unpublished results, and where I had the opportunity to interact with leaders in my research field.