The SCA Awards are an opportunity for the HPC community to recognize and celebrate those who have contributed significantly in one way or another to High-Performance Computing, or those who have been instrumental in the development of the HPC ecosystem, particularly for the Asian or Indo-Pacific region. 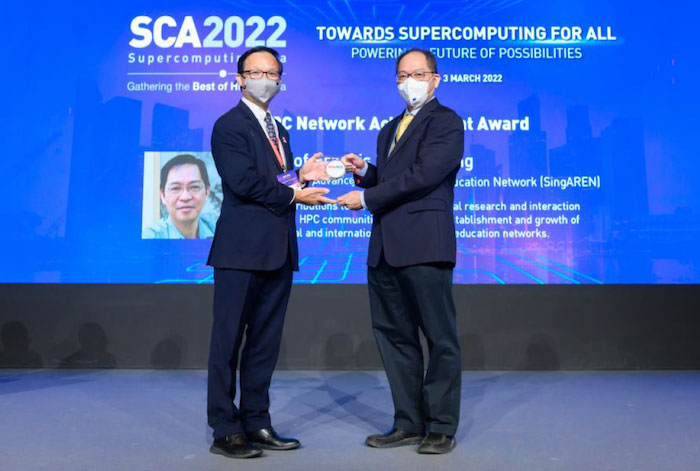 This year’s SCA22 Award recipients have been recognized for their contributions towards the development of HPC in their respective countries and towards driving international HPC cooperation and collaboration through their activities.

“The SCA Awards continues to identify and recognize individuals who have made significant achievements in their vision, leadership and contributions to HPC and related technologies. The three SCA22 award winners, indeed, have well established track records of impactful achievements that have greatly benefitted the HPC communities, both domestically and across the region,” said Prof Lawrence Wong, Chair of the SCA22 Organising Committee.

The SupercomputingAsia 2022 (SCA22) Award Winners are:

The winners were nominated, assessed and selected based on their significant and pioneering contributions to the HPC community. The SCA22 awards were presented at the SCA22 Awards Ceremony, held on 2 March 2022 at the SupercomputingAsia 2022 (SCA22) hybrid conference in Singapore.

Francis Lee is a trailblazer in the research and education community. He had initiated a number of major projects and initiatives that have brought the community together to work towards the common good.

He has been involved in SingAREN since it’s early beginnings as a project funded by Telecoms Singapore and iDA in 1998. He spearheaded the discussion and formation of SingAREN as a not-for-profit entity. As the founding President of SingAREN in 2003, he focused the sustainability and relevance of the entity to its members by deploying new services such as eduroam and SGAF (single-sign-on). Under his stewardship SingAREN obtained the SLIX 1.0 grant from NRF in 2013. The move to lease dark fiber connections rather than procuring bandwidth made SingAREN’s network technology deployment independent of the telcos. In 2014, SingAREN deployed the first 100Gbps national research and education network (NREN) in the region. In 2019, as a co-PI of SLIX 2.0, SingAREN expanded the fiber footprint and became more resilient and has grown to become a national research infrastructure (NRI). Francis played a major role in the growth of SingAREN and has been a constant driving force in guiding SingAREN over the past 20 years.

Francis has been the key spokesman for SingAREN at international meetings since 2003 and was elected to various portfolios at the regional and international level including TEIN*CC and TransPAC, and helped establish SingAREN and Singapore as a major R&E network hub. From just a single international link to USA in 2003, there are now more than a dozen international connections with several 100G intra- and inter-regional links. Singapore now has high-speed network connectivity to Europe, USA, Oceania and East Asia with a large number of these links funded by our partners as SingAREN is a trusted, efficient and well-connected hub. Francis helped facilitate these achievements through the collaborations he cultivated over many years and building trust with the community. To ensure international submarine cable resilience and diversity, Francis initiated the Asia Pacific Ring MOU with partners from USA and East Asia in 2017, where partners will serve as a back-up of each other’s links and share information of the cable system procured to ensure diversity. This collaborative network was renamed APOnet in 2021 with the addition of new members. Likewise, in 2019 he repeated a similar initiative with European partners for the connectivity between Europe, East Asia and Oceania called the Asia-Pacific Europe Ring (AER). The two initiatives have been a major game changer that improved the resiliency of international connectivity as well as cost sharing of the procurement of links. These include the CAE-1 100G link from Singapore to Slough (UK), which is co-funded by 6 parties (3 from Europe and 3 from Oceania and East Asia).

Francis has been the advisor to the NTU teams participating annually at the Student Cluster Competitions held in Asia, Europe and USA since 2016. Under his supervision the teams have achieved great success including being the Overall Winner at SC17; the Highest Linpack Award from 2017-2019; and 2nd Overall at ISC18, and ISC21. Currently, the NTU team is ranked 4th on the Student Cluster Competition Worldwide Leadership list.

In 2019, he took the lead in organizing the inaugural Data Mover Challenge, which is a competition that encourages commercial entities and the academic and scientific community to demonstrate their capabilities and expertise to test software and solutions for transferring huge amounts of research data. The DMC has grown from just a few links across the Pacific and Oceania to include Europe in the latest DMC21 competition. Francis serves as a member of the judging panel and continues to shape the competition.