Conceptually, a conditioning monitoring system uses sensors to monitor the working condition of a system, and based on the sensor data collected, determines whether the system is operating as expected and raises an alarm to alert the user.
In this project, the subject is the SMRT (Singapore Mass-Rapid Transit) train door subsystem. There are two levels of objectives in our project. First, if a fault occurs, the sensor data collected would help maintenance staff identify faulty.
A testbed comprising actual door leaves and door actuator fitted with sensors and transducers was designed and built in the SMRT-NTU Smart Urban Corporate Lab at the Nanyang Technological University. On this testbed, sensor data are collected and diagnostic reports can be generated to  provide the maintenance team with pre-emptive maintenance capability. Components early, thus increasing the productivity of maintenance staff. Second, by collecting a large amount of operational data, trends indicating imminent faults can be identified. The condition monitoring system can then alert maintenance staff to carry out corrective actions before faults actually occur, improving SMRT train service reliability.
In this project, we work specifically on trains with pneumatic doors. At present,  only the open and closed status of the train doors are monitored. According to SMRT (Singapore Mass-Rapid Transit), a significant percentage of train withdrawals is attributed to train door faults.
This system of transducers and sensors will raise an alarm to address critical faults such as:
It also predicts imminent system failure such as:
The door testbed is a good representation of the door actuator as it simulates the actual operation on the revenue trains.  From this testbed, data can be gathered about the performance of door actuator, and at the same time different faults can be emulated.
Figure 1: A test jig replicating the actual SMRT Train door was designed and built. This test jig is fitted with the following: (1) pressure sensor, (2) gear-tooth sensor, (3) Electromagnetic valve (EMV) voltage sensing and (4) video camera.

An automatic identification scheme is currently being developed to automatically classify objects as “human” or "thing".

This “human” or “thing” object is then correlated with the cause of door failure. 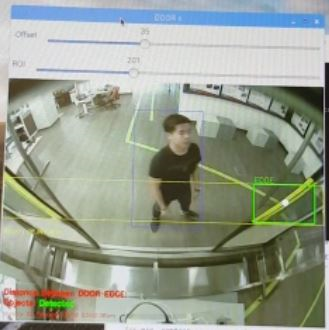 A person moving towards the door was detected (enclosed in purple rectangle in Figure 2). This video detection, helps segregate human-caused door failures from mechanical failures. 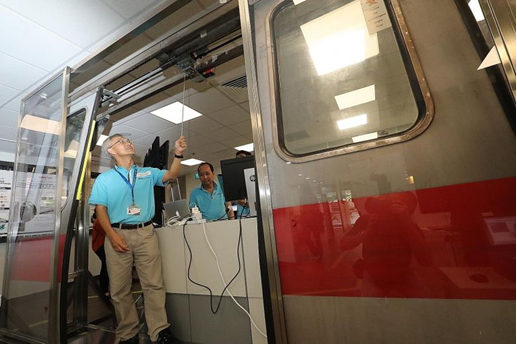