The Bukit Panjang Light Rail Transit (BPLRT) operates on a three-Phase 600-VAC traction power system. The light rail vehicle (LRV) run on elevated guideways along a centrally-mounted power and ATO rails shown in Figure 1. The rails are arranged in a five-conductor rail configuration, specifically phases A, B, C, ATO/Earth Rail, and Earth Rail /ATO. Each LRV has two sets of current collector assemblies (CCAs), each of which has eight sets of current collector devices (CCDs). The CCDs may be misaligned and dislodged due to operational wear, which can lead to unexpected inter-phase shorts and consequent power supply trips and service disruptions. 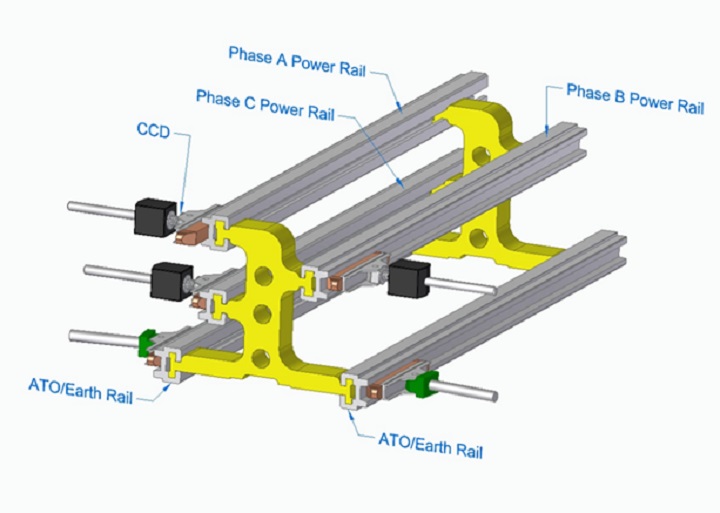 The objective of this project is to detect early signs of CCD abnormality by using a non-intrusive condition monitoring system based on a patented inductive coupling technology. The proposed system monitors the electrical contact between CCDs and power rails when the LRV is moving under its usual operation condition. By injecting a well-defined signal of known frequency and magnitude,  and monitoring the same signal in real-time, it is possible to ascertain the quality of electrical contact between CCD and power rail and, as a consequence, the condition of CCD.

As a proof of concept, several trials have been conducted on the BPLRT track. The results collected have the ability to differentiate new, used and worn CCDs, as shown in Figure 2. Figure 2 shows that the variation of the received signal level increases consistently from top to bottom, with the new and worn CCDs exhibiting the lowest and highest variation, respectively. Consequently, the proposed condition monitoring system has the ability to detect the deterioration of CCDs due to wear and aging.

Further analyses of spread of the sampled data from the trials allow us to quantify the CCD condition in terms of the statistical standard deviation (s) of the data collected, as illustrated by the green, yellow, and red bands in Figure 3 for the new, used, and worn CCDs. 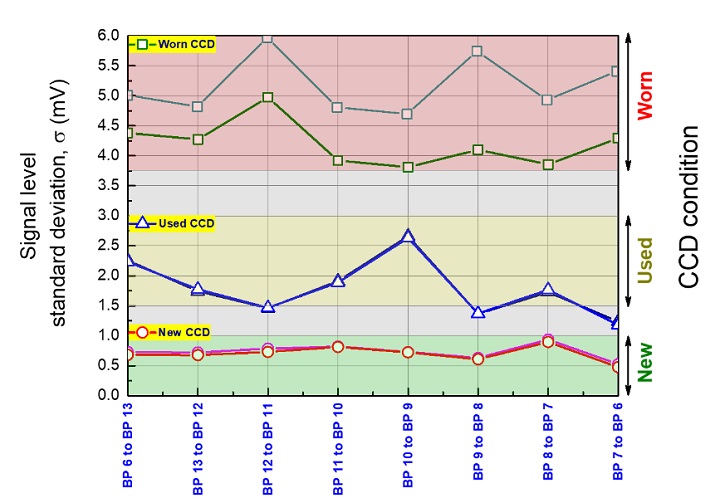 According to Figure 3, s can be used a parameter for threshold setting for the replacement of CCD before it deteriorates further. In conclusion, the proposed condition monitoring system is capable of identifying CCD and power rail deterioration caused by wear and aging. Discussions are under way to consider the possibility of mounting the system on a BPLRT train on a 6-month comprehensive field trial to both refine the system and to make it even more robust in identifying threshold levels for predictive maintenance.