Dynamic models of the track form are developed. The novelty of this project is in the development of 3D FEA models for predicting rail-sleeper-track form deformations and stresses resulting from train induced loads. This was calibrated with strain measurements results.  A track form stress analysis model was developed for specific track forms to assess structural performance. It will provide the ability to calibrate to any deformations and strain measurements. 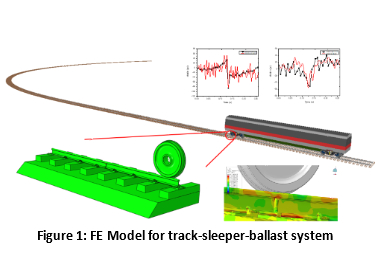 Rail steel sections are welded to form continuous rail structures and the stresses can be measured by strain gages and modeling using 3D finite element analysis by simulating the dynamic loading of a wheel on the steel rail structure. Finite element models have been developed modeling the stresses experienced at the thermite weld region at the weld to parent rail interface. The stress concentration effects of the weld was modelled in a dynamic load analysis to predict the localized stress that can cause rail-breaks under repeated loading induced by rolling wheel.Strain measurement and numerical simulation methods were both used in this research. To measure deformation and stress level at the thermite weld​ when trains pass, strain gauges were attached on the track, and the measured strain was received via a wireless system. The data recorded was used to analyze the weld stress distribution to calibrate the numerical model. Dynamic Finite Element (FE) Analysis was used to simulate the stress levels near the thermite weld region resulting from a train wheel induced load for rail tracks of different track forms. The model was then used for a parametric study to investigate how different factors such as sleeper material and ballast stiffness affect stress. 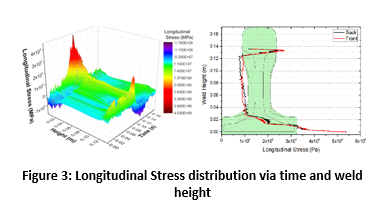