The Professor Installation Ceremony was held on 27 September 2022 in conjunction with the State of University Address (SOUA). The Ceremony was instituted to honour appointed full professors during the year. The Ceremony is intended to recognise and celebrate the appointment and achievements of the esteemed professors within the University community.

We are delighted that 3 of our SCSE faculty, Dr Bo An, Dr Sinno Pan and Dr Zhang Jie have been appointed as Full Professors this year. Indeed a proud moment for the school and our faculty members. Congratulations, Professors! 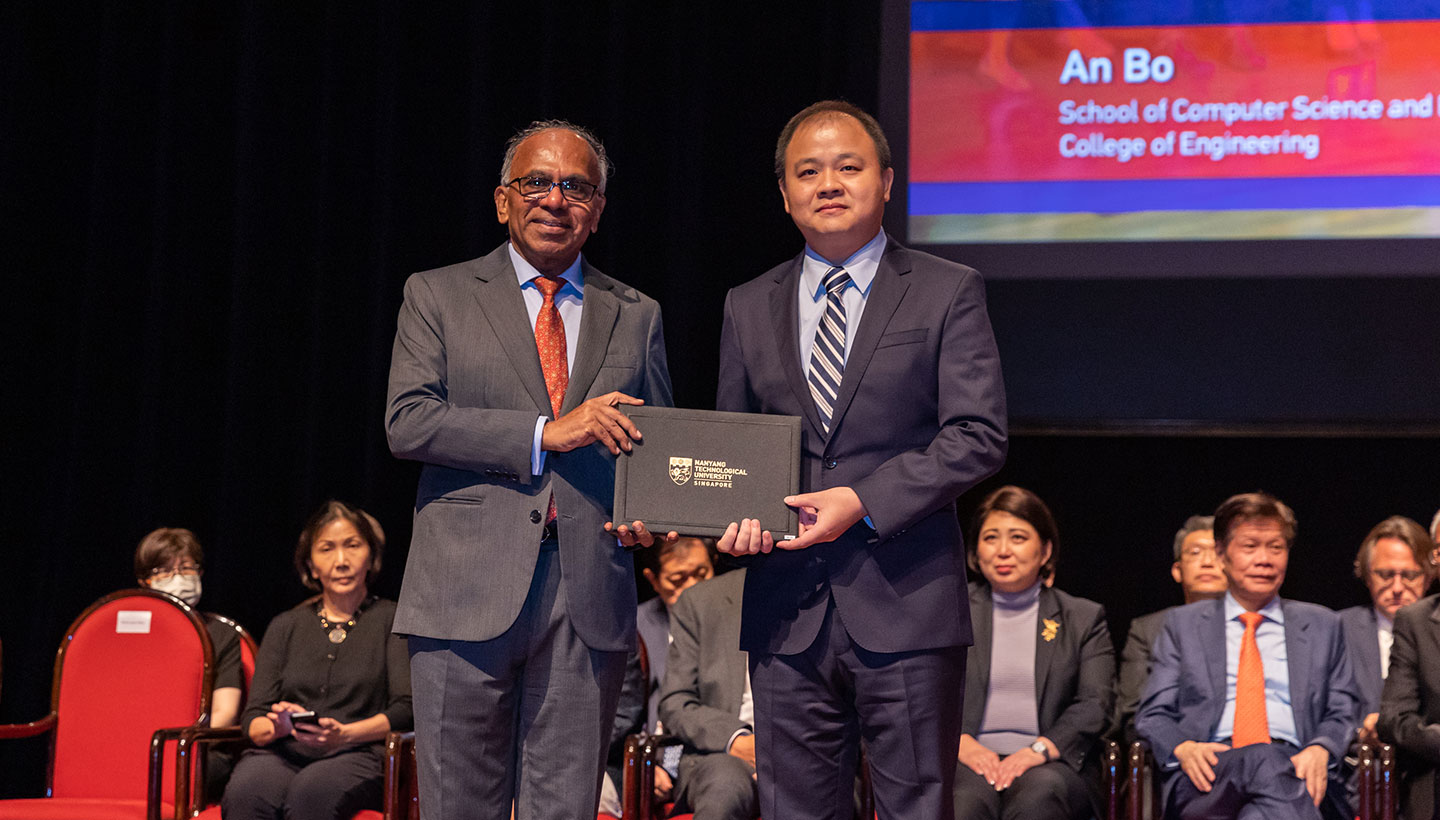 Congratulations to A/P Bo An for his promotion to Full Professor!

Professor Bo An is a Professor in Computer Science, and Co-Director of Artificial Intelligence Research Institute (AI.R) at Nanyang Technological University, Singapore. He received the Ph.D degree in Computer Science from the University of Massachusetts, Amherst. His current research interests include artificial intelligence, multiagent systems, computational game theory, reinforcement learning, and optimization. His research results have been successfully applied to many domains including infrastructure security and e-commerce. He has published over 100 referred papers at AAMAS, IJCAI, AAAI, ICAPS, KDD, UAI, EC, WWW, ICLR, NeurIPS, ICML, JAAMAS, AIJ and ACM/IEEE Transactions.

Professor Bo An was the recipient of the 2010 IFAAMAS Victor Lesser Distinguished Dissertation Award, an Operational Excellence Award from the Commander, First Coast Guard District of the United States, the 2012 INFORMS Daniel H. Wagner Prize for Excellence in Operations Research Practice, and 2018 Nanyang Research Award (Young Investigator). His publications won the Best Innovative Application Paper Award at AAMAS’12, the Innovative Application Award at IAAI’16, and the best paper award at DAI’20. He was invited to give Early Career Spotlight talk at IJCAI’17.

Professor Bo An led the team HogRider which won the 2017 Microsoft Collaborative AI Challenge. He was named in the IEEE Intelligent Systems' "AI's 10 to Watch" list for 2018. He is PC Co-Chair of AAMAS’20 and General Co-Chair of AAMAS’23. He is a member of the editorial board of JAIR and is the Associate Editor of AIJ, JAAMAS, IEEE Intelligent Systems, ACM TAAS, and ACM TIST. He was elected to the board of directors of IFAAMAS, senior member of AAAI, and Distinguished member of ACM. 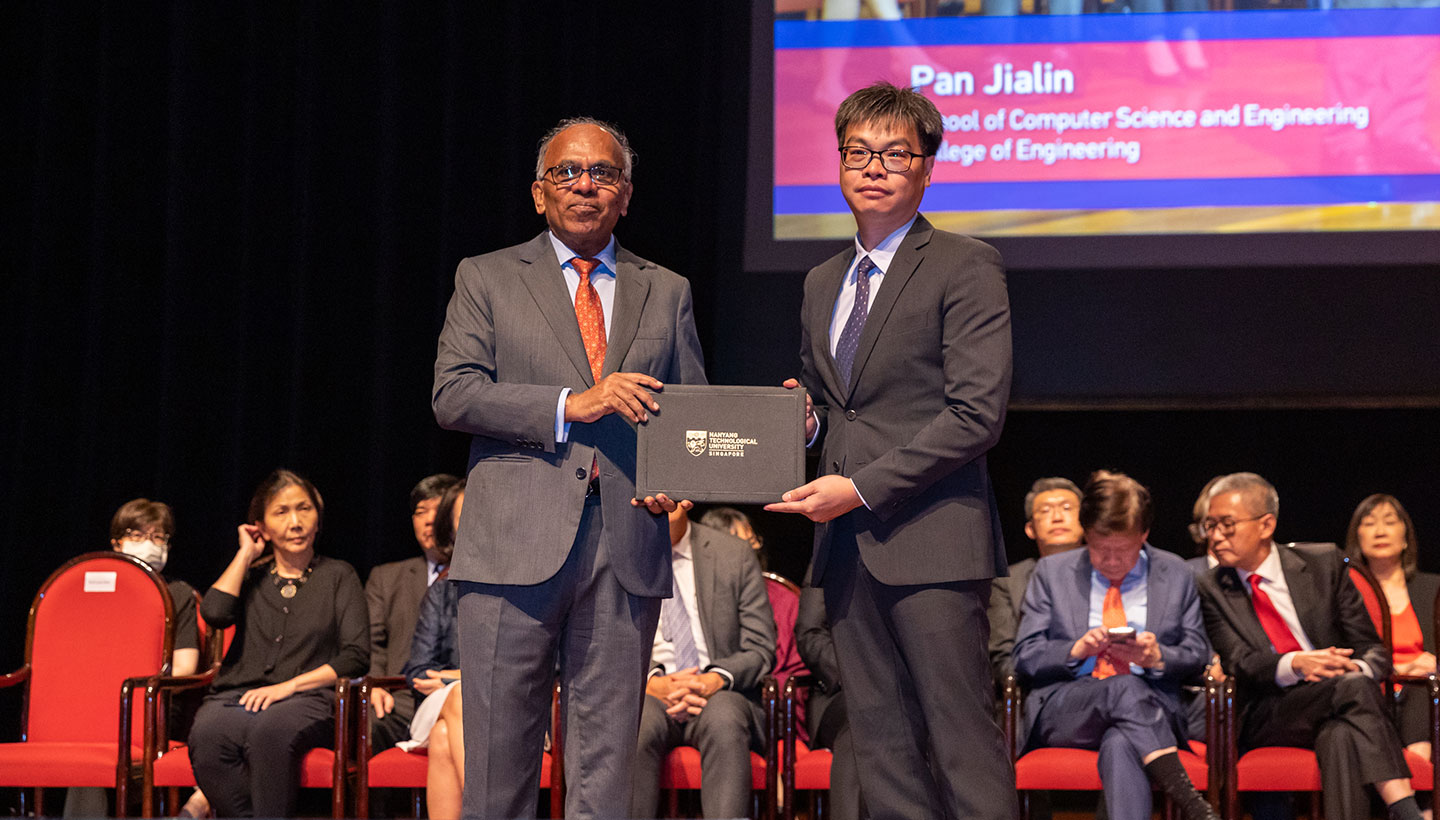 Congratulations to A/P Sinno Pan for his promotion to Full Professor!

Professor Sinno Pan has established himself internationally as an accomplished and well-respected researcher in the areas of machine learning, data mining and artificial intelligence, and their interdisciplinary applications. Professor Sinno Pan is one of the pioneers and experts in the field of transfer learning, which has become one of the most promising paradigms in artificial intelligence and machine learning. He has helped lay the early theoretical foundations and developed practical algorithms for transfer-learning techniques with diverse real-world applications. He has an impressive publication record and has to date published 26 journal and 67 conference papers. 87 papers (94%) appear in Tier 1 venues. His research work has been cited more than 30,000 times by peers according to Google Scholar. He has been working closely with both government agencies and industries such as the Alibaba-NTU Singapore Joint Research Institute, MOE, A*STAR, Microsoft, Fuji Xerox, and NTU Corporate labs. Professor Sinno Pan has demonstrated strong collaborative efforts and leadership in bringing a cross-disciplinary team together. He has demonstrated his research leadership by establishing a competent research team.

Over the years, Professor Sinno Pan has outstanding funding records, successfully garnered numerous external grants totalling over $6.83 million. In addition, he was awarded as one of the top 2% of Scientists Worldwide identified by Stanford University in 2021. He was listed as one of AI 2000 Most Influential Scholar Award in 2020 (ranked the 9th in AAAI/IJCAI), and one of the Top 10 Most influential Scholar Award in Artificial Intelligence in 2018 (ranked the 5th in AAAI/IJCAI). He was named to “AI's 10 to Watch” by the IEEE Intelligent Systems magazine in 2018. 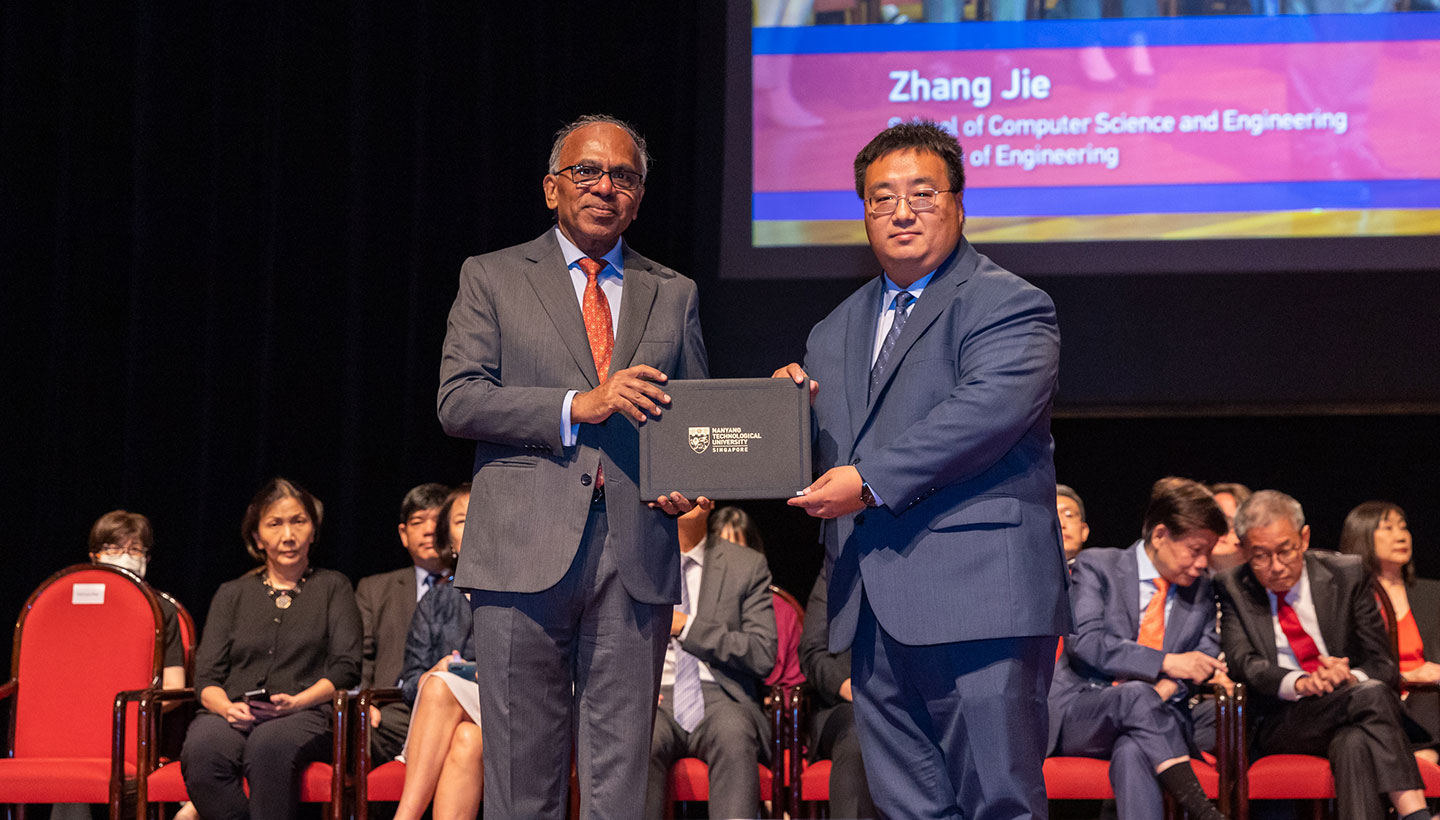 Congratulations to A/P Zhang Jie for his promotion to Full Professor!

Professor Zhang Jie is currently leading the Computational Intelligence Group. He is also the Director of the Special Project Programme and Deputy Director of the SIMTech-NTU Joint Lab on Complex Systems. Professor Zhang Jie obtained Ph.D. in Cheriton School of Computer Science from University of Waterloo and was the recipient of Alumni Gold Medal in 2009. From 2017-2018, he was appointed as Tan Chin Tuan Exchange Fellowship, New York University. He was also an Adjunct Fellow, Singapore Institute of Manufacturing Technology (SIMTech), A*STAR, from 2020-2021.

Professor Zhang Jie has established himself as an academic of international repute in the general area of Artificial Intelligence. His research has been focused on providing personalized recommendations to users on which others to interact with (e.g., do business with or acquire information from), by modelling: 1) the trust (i.e., reliability, capability and honesty) of the others; and 2) the preferences of the users. He has made significant contributions to both trust modelling and preference modelling. More interestingly, for accurately modelling trust, he has specifically taken good care of user preference (subjectivity); for accurately modelling preference, he has well leveraged the trust relationships between users. Over the years, Professor Zhang Jie has successfully garnered numerous external grants totalling over $12.53 million. His papers have been published by top journals and conferences and won several best paper awards. In 2021, he was awarded the AI 2000 Most Influential Scholars Honorable Mention and was one of the World's Top 2% Scientists by Stanford University.

Professor Zhang Jie has been active in serving research communities. He is a board member of User Modeling inc. and a member of the ACM RecSys Steering Committee. He served as a General Chair for the IFIP International Conference on Trust Management in 2014 and the 26th ACM Conference on User Modelling, Adaptation and Personalization (UMAP) in 2018. He will also serve as a General Chair for the 17th ACM Conference on Recommender Systems (RecSys) in 2023. He is a Senior Editor of the Electronic Commerce Research and Applications (ECRA) journal and Associate Editor of the ACM Transactions of Recommender Systems journal.