College of Engineering (CoE) has the privilege of hosting Vitalik Buterin, creator of Ethereum for its Distinguished Speaker Lecture Series on 29 September 2021. The Distinguished Speaker Lecture Series was established by CoE to invite highly influential leaders and experts from academia, industry and civil society to provide opportunities for the CoE/NTU community to network and collaborate with world-class leaders. The talk was hosted by Professor Yonggang Wen, Associate Dean (Research) of CoE, who is also a Professor and President’s Chair at the School of Computer Science and Engineering (SCSE).

In this talk, Vitalik shared his thoughts on the current state of blockchain, including its numerous applications, such as Decentralised Finance (DeFi), Non-Fungible Token (NFT), Ethereum Name Service (ENS), Decentralised Autonomous Organisation (DAO) etc. In addition, Vitalik elaborated on current blockchain challenges and introduced their efforts in addressing these problems to make more mainstream blockchain use a reality.

The talk began with a warm introduction by Prof Wen.

Vitalik first reflected on the great success achieved by Ethereum so far and the huge potential of its future in numerous applications including DeFi, NFT, ENS, and DAO.

Vitalik then moved on to requirements for a more efficient and robust distributed system that Ethereum is working towards. One challenge is to improve security and energy efficiency since Ethereum is still using the Proof of Work (PoW) consensus algorithm which requires a huge amount of electricity for enumeration. To tackle this problem, Vitalik and his team are working towards a Proof of Stake (PoS) consensus algorithm to replace the original mechanism. By separating the data layer and consensus layer, the team is getting ready for a seamless switch that will be transparent to users except for its requirement to download a new client. 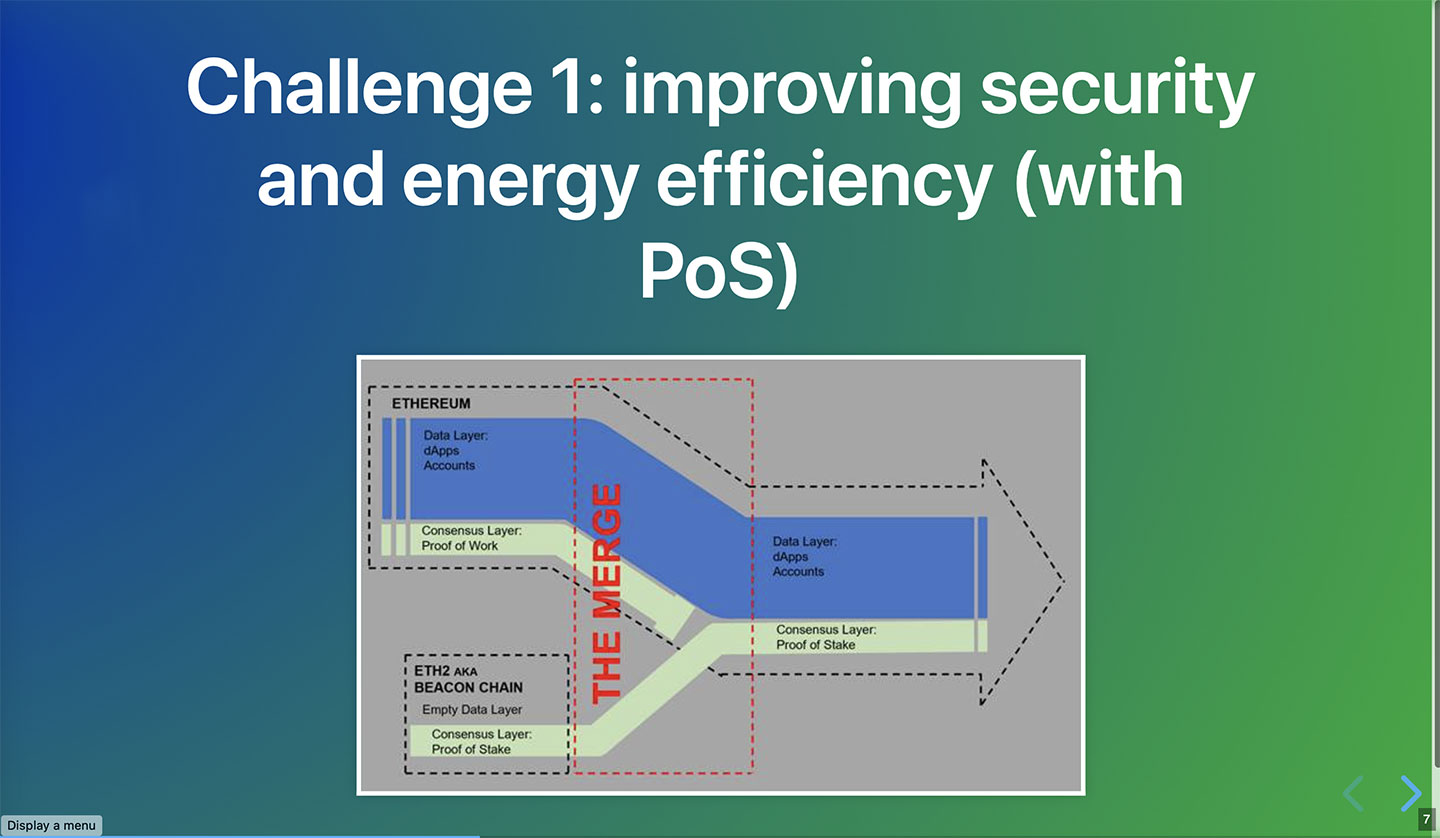 Scaling is another bottleneck for Ethereum since it now requires a high gas limit (can be viewed as transaction fees). To address this problem, Vitalik and his team propose to use layer-2 rollup protocols and various sharding methods to achieve scalability. 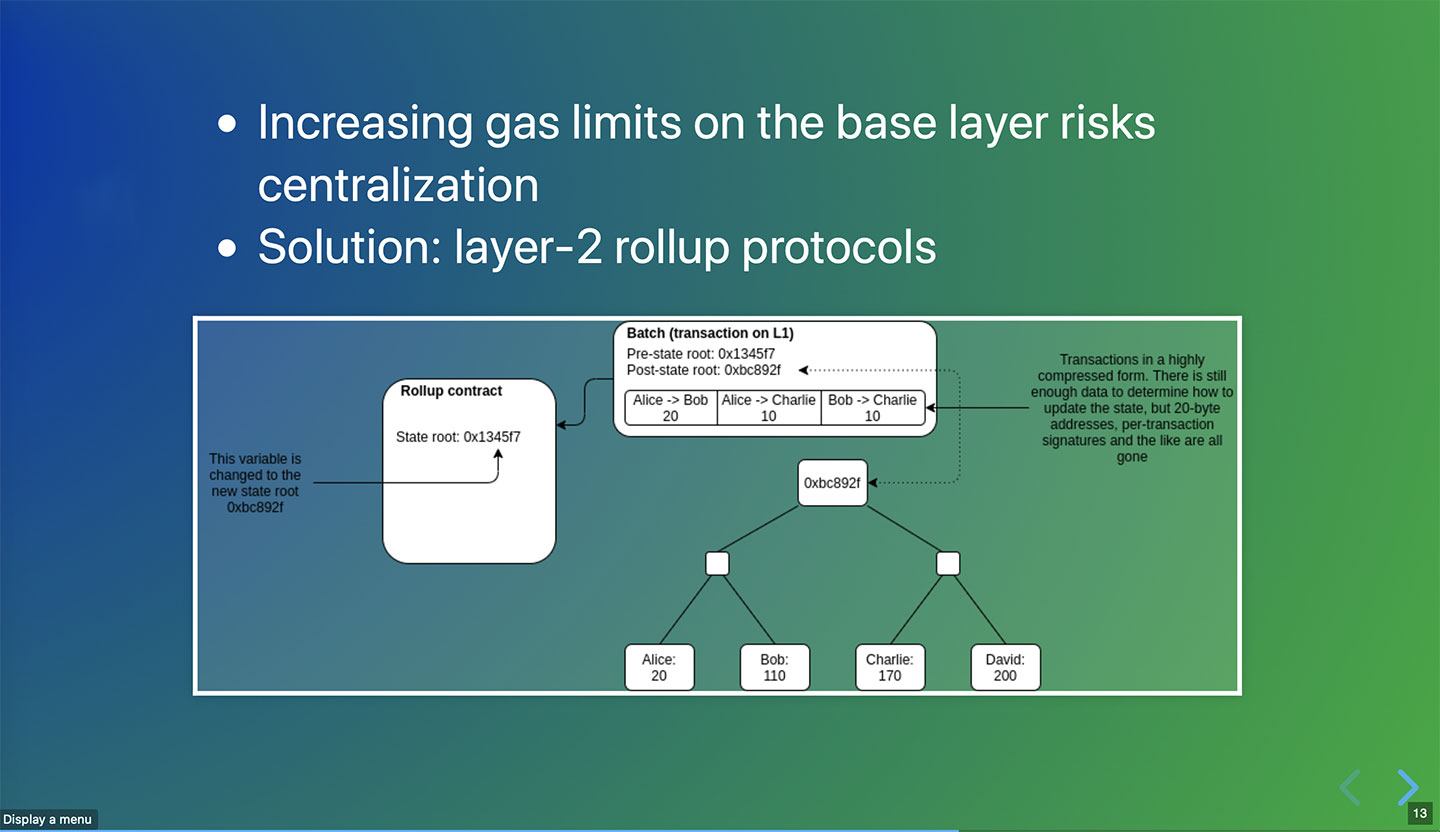 Finally, Vitalik addressed a frequently encountered problem for Ethereum where users sometimes experience a less than optimal transaction confirmation time which may take up to 1-5 minutes. Vitalik shared that with the introduction of EIP 1559, most transactions can now be concluded in less than 20 seconds and will continue to decrease in the future. 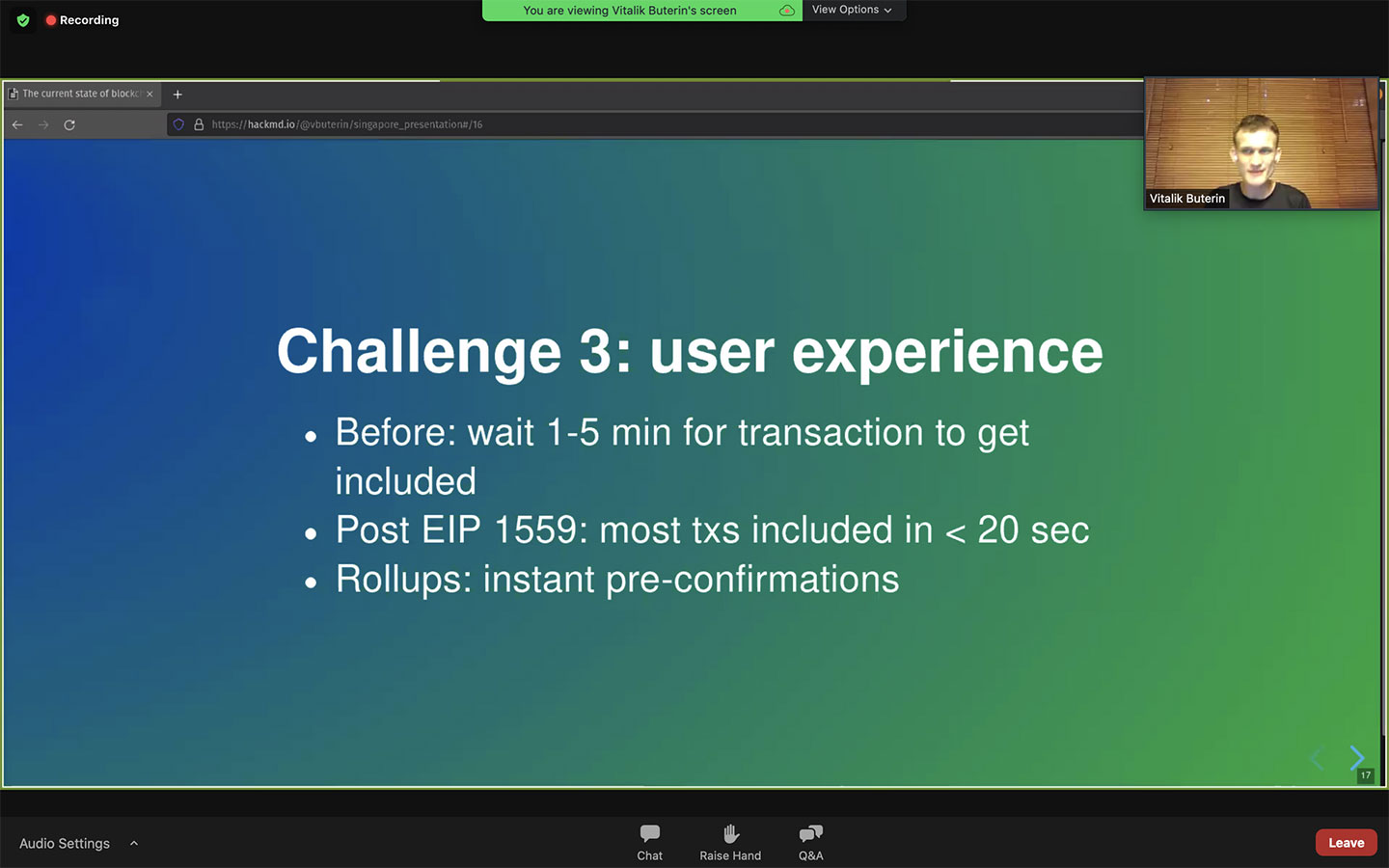 During the Q&A session, Professor Wen asked for Vitalik’s suggestions how students who are keen to explore blockchain for their careers can get started. Vitalik suggested that for students who aspire to be a blockchain developer, going through the entire process of building some simple blockchain applications/smart contracts would be the best way for them to kickstart their journey. For graduate students who would like to pursue blockchain for their research, Vitalik suggested some potential research directions could include deep optimisation for zero-knowledge proofs, smart contract security, as well as the analysis of blockchain from more humanistic angles, such as crypto from a sociology, political science, anthropology or economics point of view.

Vitalik’s presentation deck can be assessed at this link.

Vitalik is the creator and one of the co-founders of Ethereum. He first discovered blockchain and cryptocurrency technologies through Bitcoin in 2011 and was immediately excited by the technology and its potential. He co-founded Bitcoin Magazine in Sep 2011. After two and a half years investigating what the existing blockchain technology and applications had to offer, he published the Ethereum whitepaper in Nov 2013. He now leads the Ethereum research team, working on future versions of the Ethereum protocol. Find out more at Vitalik’s personal site.

– Facilitated by CoE and SCSE

Prof Lam was at the Singapore International Cyber Week, 18 Sept

Media Interview on AI – by Assoc Prof Bo An