Even though Tan Chin Sian (EEE/2016) faced financial difficulties while growing up, he appreciates his life’s experience and maintains a positive outlook. “My motto is to help people become better versions of themselves and I believe in paying it forward,” he said. “As the saying ‘a rising tide lifts all boats’ goes, I constantly tell myself to keep growing and become a better version of myself, so that I can positively influence people around me to do the same too.”

On his 31st birthday, Chin Sian chose to give rather than receive, establishing the Tan Chin Sian Scholarship at his alma mater. “It felt surreal to be signing the gift agreement on my birthday, and I couldn’t believe that I was actually doing it,” said Chin Sian, whose gift enables a total of eight first-year undergraduates to receive scholarships for one academic year over a period of four years. 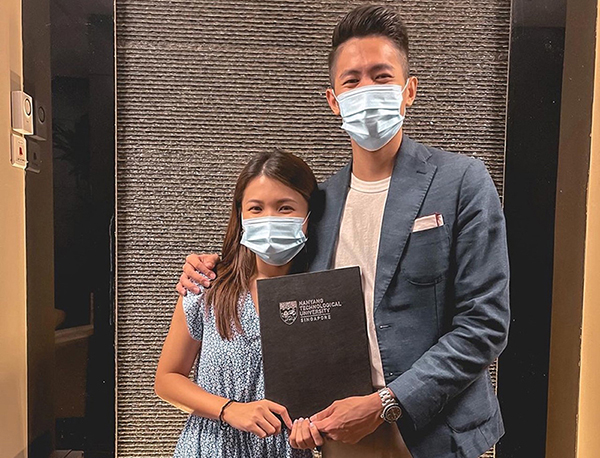 Tan Chin Sian and his wife, Candice Ong (NBS/2015), holding the signed agreement of the Scholarship at the University Advancement Office (UAO).

On what motivated him to support a Scholarship, Chin Sian said: “I wanted to give the same privilege to people who want to go to university and experience what it’s like. Because of how my life has turned around, I want to give back.”

“It is also to remind myself not to forget how I have been supported until today”, added Chin Sian, who is currently a Financial Services Director. 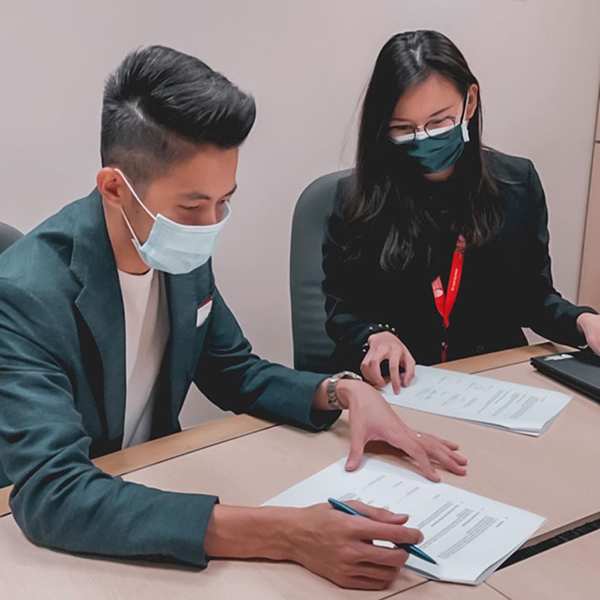 Ivy Wong, a fundraiser at UAO, guides Chin Sian through the process of setting up his Scholarship.

Chin Sian is the eldest son in a family of six. His mother is a housewife, and his late father, the sole breadwinner, was a self-employed contractor. “Life was simple but peaceful. My dad gave us everything he could, and he taught me what hard work is by being very hardworking himself”, said Chin Sian. “Having seen him work so hard to support the family made me want to do even better in life.”

Moved by his late father’s way of life and on the value he placed on higher education, Chin Sian tried his best to reduce the financial burden on his father, as he pursued his studies. He applied for various bursaries while at polytechnic and studied hard to enter NTU Singapore.

After applying for various scholarships, Chin Sian was awarded the Nanyang Scholarship from his first year as an undergraduate, enabling him to experience a holistic education at NTU. “Because of the Nanyang Scholarship, I was able to stay in Hall 8 and join its dance team. It also helped to cover my hostel fees and gave me an allowance to go for an exchange programme at the University of California, Los Angeles (UCLA).”

Just as he is motivated to give back after benefitting from the Nanyang Scholarship, Chin hopes that the beneficiaries of the Tan Chin Sian Scholarship will be encouraged to do well and, in turn, help other people after them.

An avid dancer since he was 17, Chin Sian also gives back to various dance communities in Singapore, including those in NTU Halls 4, 6, 8, 9, 11 and 18. “Dance has contributed a lot to who I have become, and my life would have been very different without it,” said Chin Sian. “It means a lot to me to give back to the community where I have gained the most.”

We hope you have enjoyed this story about the impact of giving to NTU.

Would you consider adding to this momentum and making a gift to NTU Singapore today? Whether you help to provide needy students with financial aid or support the NTU cause of your choice, there are many different ways to give to and support the University. If you would like more information or require assistance in making a gift, please drop us an email or call any of our fundraisers. Thank you for considering NTU for your support.