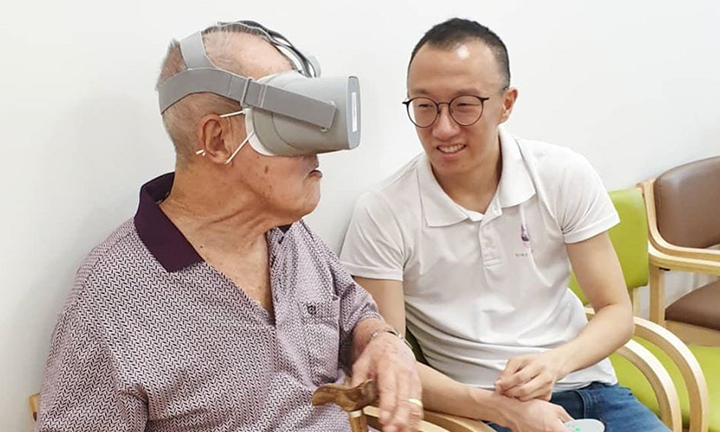 Virtual reality (VR) devices are no longer just for the generation of tech-savvy youths and professionals. NTU alumnus Eugene Soh is now using them to help those with dementia see the world outside.

“It started out as a favour for a friend’s research project at a nursing home in 2018, where the elderly residents could explore different parts of the world by putting on my VR goggles,” says Eugene, who graduated from the School of Art, Design & Media in 2013.

The project was subsequently featured on CNA and later earned him the first prize at a Singapore hackathon in September the same year.

Founding Mind Palace was a way to continue this work, says Eugene, who has been a tech-artist for seven years.

The social enterprise lets patients with dementia, who may be immobile, immerse themselves in familiar and new experiences through the use of VR technology. Some VR scenes incorporate the patients’ loved ones to jolt their memory. “My reward for running Mind Palace is seeing the seniors smile and hearing about their memories,” says Eugene.

Eugene, 32, who is the “Chief Dude” at his own creative tech studio, Mind Palace is a necessity. “The young people now – me included – could potentially be part of the growing dementia population, and before that happens, we ought to find ways to make things better for everyone,” he explains.

Eugene adds that “being able to explore new technology” in his various pursuits is what keeps him going. He is now creating fun immersive experiences for the elderly that involve wall projections and motion sensors.

This story was published in the Jan-Feb 2020 issue of HEY!. To read it and other stories from this issue in print, click here.

Paying tribute to our everyday heroes

How an illustrator found his mission educating youth on personal finances